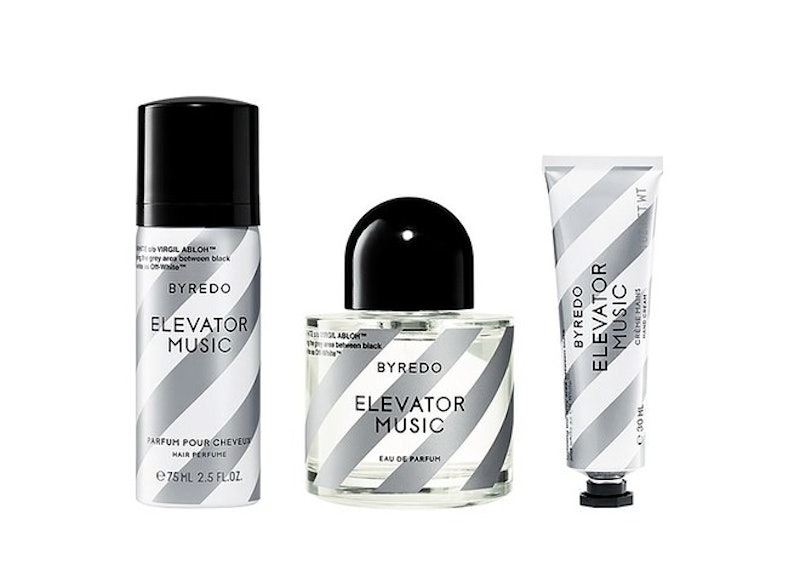 When you think of elevator music, you don't necessarily think sexy thoughts. Instead, an image of you staring straight ahead pops us, while you're steadfastly ignoring everyone else in the box that's with you as tinny, unobtrusive music pumps through the sound system. Which is why it's weird that a fragrance line would be inspired by that beige-like image, but there's more to it than meets the eye. Off-White x Byredo's first fragrance collab is named "Elevator Music," and at first glance, it's a head scratcher. When labels launch perfumes, they usually dress their brand imagery up with couture dresses, abandoned islands, beefy, shirtless men, and yachts racing off to somewhere unknown. So choosing, instead, to evoke an image of walking into an elevator and going up to the eighth floor in a Best Western is an interesting deviation.

But that's taking the line way too literally. Instead, Elevator Music is meant to be a metaphor.

But before we break down the genius behind this new collection, let's first take a look at the players. Off-White is a street-wear brand by designer Virgil Abloh, and it offers a medley of different looks that span from tartan thigh high boots, to silver windbreakers, to industrial sliders. Kim Kardashian is a fan, where she recently wore his pink tulle confection of a dress that had Instagram a-buzzing. Byredo is a cult Swedish fragrance label by Ben Gorham, and it stocks everything from candles and perfumes, to body washes and lotions. Together the two brands came together to create an understated line that consists of perfume, hair mist, and hand cream.

So why elevator music? The reason the collection was inspired by that particular image was because the two designers wanted their scent to be subtle and unobtrusive — kind of like elevator music itself. When you step into an elevator, you don't usually tune into the selection playing inside, but rather the tune melds into the background and becomes part of the general experience. They believe your scent should serve the same purpose.

“It’s a fragrance for the background, as opposed to the foreground,” explains Gorham to Vogue.

Which means the scent isn't going to be heavy or overly sweet. If it's meant to melt into the background and not take center stage, then the smell can't be something too loud or in-your-face. Instead, it contains notes of midnight violet and bamboo that mix with a musky ambrette. It's light and woodsy.

The packaging is just as unobtrusive, and gives a slight industrial vibe — which is both a hat tip to Off-White's brand aesthetic and to the metallic feel of elevators. Sporting light grey and white diagonal stripes, it's understated and to the point. That same design spans the hair mist, which gives your hair a light boost in scent, and the perfumed hand cream.

As far as prices go, they're on the luxury side. Offered in a 100-milliliter bottle, the eau de parfum goes for $275, making it a splurge. The hair mist is more affordable, being priced at $75, and the hand cream is $45.

While the scents are the headliners of the collection, the two designers are also releasing a small capsule clothing collection along with them, featuring a sporty bucket bag, a geometric handbag, an assortment of denim, and a collection of tees. There's something for everyone, and those pieces are just as unobtrusive as the scents. They add to the experience of your day without being distracting or jarring, really helping to push the idea that "less is more."

The Off-White x Byredo fragrance collaboration will be available May 17 at both Barneys and Byredo. If you feel like treating yourself, circle your calendar for then.