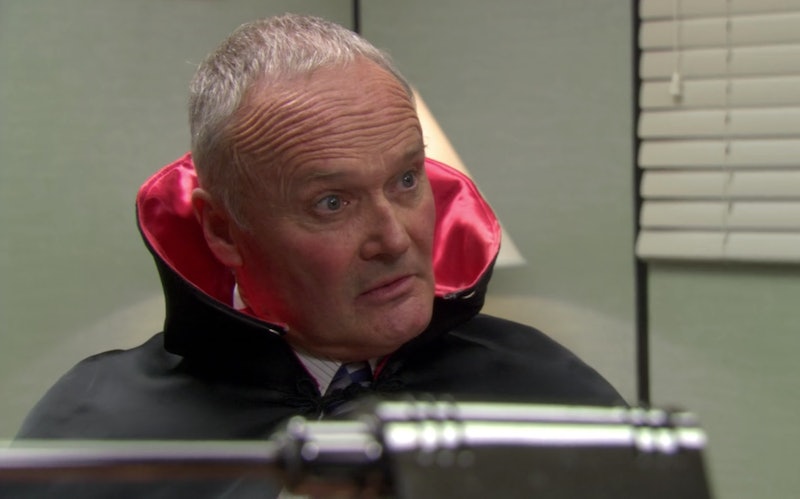 Dunder Mifflin wouldn't have been the same without quality assurance expert Creed, his mung beans, or his mysterious criminal life. Thankfully, both the character and actor Creed Bratton avoided getting fired on The Office in Season 2. It turns out, this was more than just a plot point, as Bratton revealed while speaking to his former costars Jenna Fischer and Angela Kinsey on their Office Ladies podcast that aired on Wednesday, Jan. 15.

In Season 2, Episode 5, "Halloween," Michael Scott was tasked with firing someone due to cutbacks, and it came down to either Creed or Devon White (played by Devon Abner). As Fischer explained in the podcast, none of the series regulars could be fired because they were under contract and Office creator Greg Daniels didn't want to fire any of the supporting cast, despite none of them having full-time contracts yet. Daniels also didn't want to hire a new actor just to fire them, so Creed and Devon, the only two background actors, found themselves on the chopping block.

Not only did Bratton have to fight for his character's job, but also his own. According to Bratton, Daniels said, "At the time, he told us, 'One of you guys is going to have to go, but we don’t know yet. We’re going to shoot you both and see how it works out.'" In the episode, Devon was ultimately fired over Creed, even though Michael tried to fire Creed first. But this wasn't by chance. As Fischer noted, Daniels eventually learned Abner "had a theater contract and that he was going to go on tour with a play," which is why his character was let go in the final cut.

To add pressure to an already intense situation, this was the first time Bratton actually had lines on the show. "I remember [producer] Kent Zbornak threw the script down and said, 'OK here it is. This is your moment,'" Bratton recalled on the podcast. He even revealed he memorized his part of the script "forwards and backwards," along with playing the lines on a recorder in the middle of the night while he was sleeping. "I knew this was the rubicon," he said. "My intuition said, 'this is it.'"

More like this
'The Queen’s Gambit' Season 2 Tweet Wasn’t From Anya Taylor-Joy
By Mary Kate McGrath, Jack Irvin and Grace Wehniainen
Everything To Know About 'And Just Like That...' Season 2
By Jack Irvin and Grace Wehniainen
Netflix Shut Down 'Bridgerton' S3 Rumours About A “Very Dark” Storyline
By Bustle
This 'One Tree Hill' Wardrobe Error Is Going Viral On TikTok
By Brad Witter
Get Even More From Bustle — Sign Up For The Newsletter
From hair trends to relationship advice, our daily newsletter has everything you need to sound like a person who’s on TikTok, even if you aren’t.