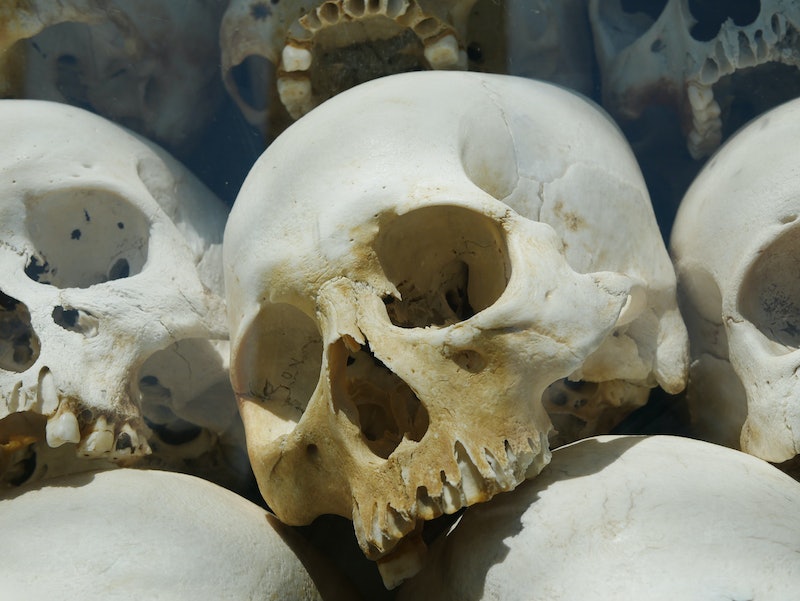 There is a lot we don’t know about human history. Where did we come from? Who did we come from? And how did we get to where we are now? Well, we may have some answers — or, at least, more specific questions — as scientists have identified the oldest human remains outside of Africa known to modern science. The finding may shift the story of prehistoric humans.

In the 1970s, scientists uncovered a fragment of a skull fossil in a cave in Greece. Thanks to modern dating technology, researchers have now been able to put a timestamp on this fossil. This new skull is 210,000 years old. For context, the earliest evidence of homo sapiens was 50,000 years ago in Southeast Europe, making this new skull fossil more than four times older than previous evidence suggested. Here’s where things get a little confusing. (As if understanding how we can date a piece of a fragment of a fossil hundreds of thousands of years ago weren’t confusing enough...but I digress.)

In other words, the finding suggests there was a more modern Homo sapien population that existed before a more prehistoric Neanderthal population.

“Our findings support multiple dispersals of early modern humans out of Africa, and highlight the complex demographic processes that characterized Pleistocene human evolution and modern human presence in southeast Europe,” the study continues. Apidima 2, the Neanderthal, was discovered to be older than the previous estimate. The same was true of Apidima 1, the Homo sapiens skull, as researchers realized it was actually more than 40,000 years older than Apidima 2.

One of the identifying features of Neanderthals and extinct human relatives like them is a skull that bulgest outward in the back. “It looks like when you put your hair up in a bun,” Dr. Katerina Harvati, lead study author of Eberhard Karls University of Tübingen, told the New York Times.

Homo sapiens and more modern human ancestors, however, have a more rounded back of the skull. After digitally rebuilding the skull from the fragment that was found in the ‘70s, researchers realized the back of Apidima 1’s skull was round.

“It is very exciting!” Dr. Harvati told National Geographic. “It is gratifying to see that my hypotheses about the importance of the region for human evolution are supported by our findings.”

This is also exciting for hair history: man buns come and go. Hair fashion is a flat circle.

“As with any challenging new find, the appropriate initial reaction should be a healthy skepticism, even when my own name is on the paper,” study author Chris Stringer said in a tweet. For example, researcher don’t have the parts of the skull like the frontal bone, brow ridge, teeth, or chin region, which Stringer notes could have been “less ‘modern’ in form.” Stringer continues, “However, we tested the reconstruction in various ways, and we have compared it with a large range of other human fossils, to increase the resolving power of our analyses.”

This new research poses a lot of questions about where early human descendants migrated from. Dr. Harvati, lead author of the new study, told the Times said that “it’s impossible to say how long the earliest Europeans endured on the Continent, or why they disappeared.”

“It’s a very good question, and I have no idea,” Dr. Harvati said. “I mean, this is the first time that we’ve found them.” Here's hoping we find another fragment that adds a piece to the ever-growing puzzle that is human history.

More like this
An Expert Weighs In On The Viral Raw Carrot Salad Trend
By Alexis Morillo
How Ovulation Affects Your Sense Of Smell, Libido, & More
By JR Thorpe and Lexi Inks
The 8 Best Crystals For Meditation, According To A Healing Energy Practitioner & Meditation Teacher
By Lauren Moison
12 Aphrodisiac Desserts To Spice Up Your Valentine’s Day
By Kaitlyn Wylde
Get Even More From Bustle — Sign Up For The Newsletter
From hair trends to relationship advice, our daily newsletter has everything you need to sound like a person who’s on TikTok, even if you aren’t.