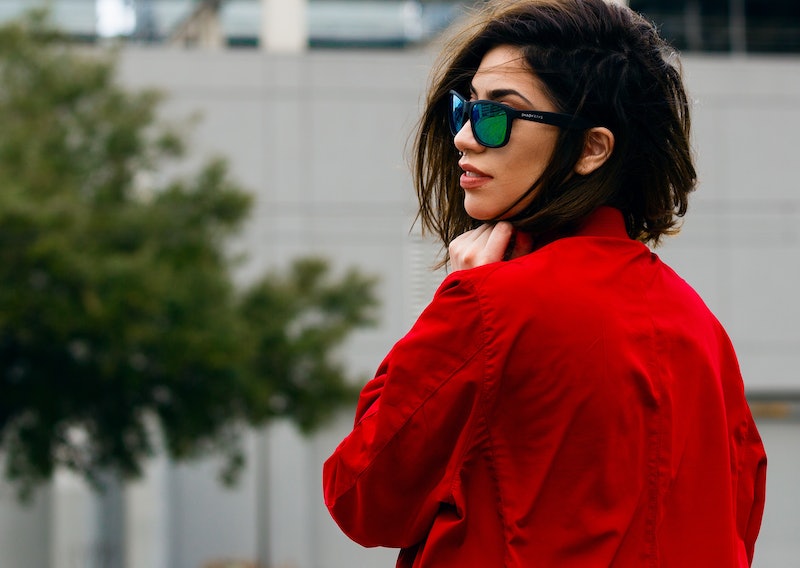 The color red has long been associated with being powerful, self-assured, and beautiful. A new study on the color red is adding to the perception that it's pretty much everyone's lewk — but with a confident twist. It's not about how red can make other people think you look great (which is, ultimately, irrelevant). It's all about how red can make you think you look great.

The study, published in the European Journal of Social Psychology, aimed to understand how wearing red impacts individuals' perception of their own attractiveness. Participants wore either a red shirt or a blue shirt (without knowing what was being tested), and then rated how attractive they thought they were. As the researchers expected, the people wearing red reported back that they were better looking.

This isn't the first study to suggest that red can have an impact on how we see ourselves, how we see others, and how we behave. A 2013 study suggested that men consider young women who wear red as being more "sexually attractive." (Although, again, this doesn't have to play into your decision to wear or not wear red.)

It also may impact athletic performance, according to two 2011 studies: one found that wearing red may increase speed and strength of reactions for a boost of energy, while the other suggested that perception of the color red increases the force and velocity of motor output, basically leading to more physical intensity. (A great workout can often help you feel strong and capable, which is a big confidence booster in its own right, so there's a red connection there, too.)

Of course, if you hate the color red, it's not going to make or break how attractive, confident, or athletic you are. But if not, trying to work in some red accents could be great way to test this recent study's findings for yourself. Because wearing something that has you ~feeling yourself~ is an amazing way to boost your confidence anytime, anywhere.

For many people, red's a foolproof option (even if you're not conscious of it). For others, wearing red can feel a little further out of their comfort zone. The good news is, there are endless ways to get in on the confidence-boosting power of wearing red with just a pop of the color, from subtle accessory accents to more statement-making wardrobe pieces. Here are seven pieces and products to inspire you to work red into your rotation:

There's nothing like a red-hot heel to pull an outfit together.

These tassel earring are a fun statement accessory for summer.

A nostalgic red bandanna is one of the most versatile ways to work red into your wardrobe, because there are so many different ways to wear it.

There's something about a red lip that feels so classic and so badass at the same time.

5. WANT Quilt While You're Ahead Clutch

WANT Quilt While You're Ahead Clutch, $32, Nasty Gal

A quilted statement clutch never goes out of style.

Give a shout-out to the Golden State in this cool cap.

Who says anyone else has to see your red? Just wearing a fiery bra can help you tap into that confidence, too.