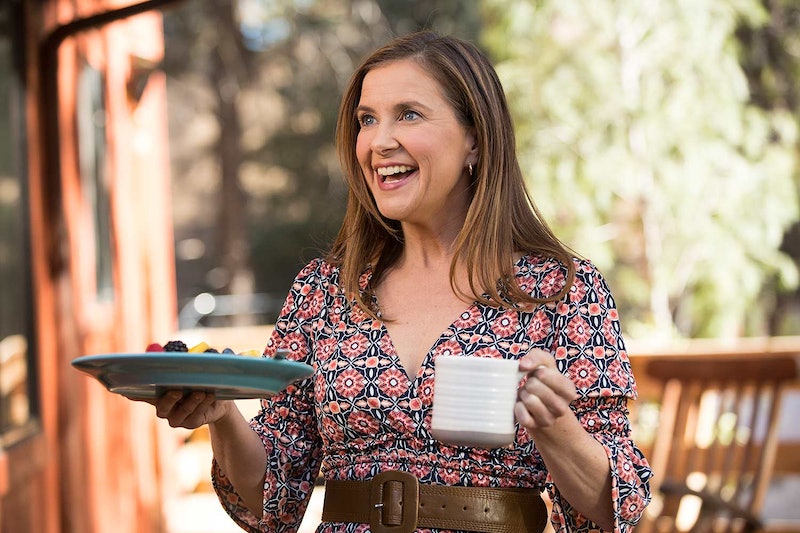 Kellie Martin is known for some of the most iconic roles in the '90s and 2000s. She played the awkward, but sweet Becca in the critically acclaimed drama series Life Goes On. Her character Lucy Knight suffered one of the most tragic deaths ER had ever seen. And now, the 41-year-old Yale graduate is trying something new: comedy. Kellie Martin stars in The Guest Book, premiering on TBS on Aug. 3. It's the next chapter in the actor's successful Hollywood career, which Martin hopes she can eventually expand into more directing and producing. And she's very aware that in stepping behind the camera, she'll be on one side of a shameful gender imbalance in the industry.

She recalls her lengthy career with me in a phone interview in late July and makes a startling realization: "I will say, behind the scenes, it is stunning to me that I have only worked with less than 10 female directors in my 34 years as an actress, less than 10," Martin tells Bustle. "I don't know what we need to do to change that."

Her experience with mostly male directors has perhaps inspired the actor's own ambitions to be in charge on set. In 2004, Martin was accepted into the prestigious American Film Institute's Directing Workshop for Women, and she has directed two Mystery Woman films for the Hallmark Channel in 2005 and 2006. It's something Martin would like to continue doing, but she recognizes that balancing directing and motherhood can be a challenge for herself, as well as other women in Hollywood. She is currently raising two young children — Maggie, 10, and Olivia, 1, with husband Keith Christian.

"You have to give yourself, body and soul, when you're directing," she says. "For me, that's been why I haven't pursued it, because I have a 17-month-old downstairs and she wouldn't stand for it ... Maybe I'll end up stepping behind the camera as my kids get older and produce more and direct more. That's kind of my plan."

Martin's acting career, though, hasn't slowed down at all as she balances work and family. She's currently working on a third installment of the popular Hailey Dean Mystery movie series for the Hallmark Channel. Martin mentions that she was still breastfeeding while filming The Guest Book, which features a rotating cast of guest stars staying in the fictional Mount Trace Froggy Cottage every week. Her character Officer Kimberly Leahy showcases the typically dramatic actor's funny side — and Martin definitely does have one, as the quirky and outspoken small-town cop.

"The way I approached this is I just played it from my heart, which is kind of how I do everything," she says. "I let the words be the funny part and I just did it honestly... In comedy — this happens all the time — the producer or the writer will come up after you've done a take and say, 'Try the line this way now.' And that is not something that happens in dramatic shows like ever, so that was interesting and definitely not something I was used to."

It was Martin's home life that led her to branch into another genre with The Guest Book: Series creator and executive producer Greg Garcia (My Name Is Earl, Yes, Dear) is her neighbor. Their children are friends, and Martin is close with Garcia's wife Kim. "I actually never thought I'd get to work with Greg, just because I'm drama girl and he's comedy guy," Martin explains. "When I got the offer to be part of the whole series I was very, very surprised and very nervous, because he's such a good friend and I have such respect for his work that I was like, 'Oh my gosh, I better step up to the plate here. I need to do this.'"

Take a look at Martin's prolific list past acting credits and you may wonder if there's a role she can't take on. Troop Beverly Hills? She had a small role. A Goofy Movie? She voiced Roxanne. Mad Men? She guest starred in an episode in 2014. Martin has been acting professionally since 1982, when she was only seven-years-old, and it's an era she says seems like "Old Hollywood" now. "We used film, and they used pancake makeup," she recalls. "When digital came along and then reality TV came along, it really has changed a lot."

Even decades later, most people recognize Martin from her breakout role as teen Becca Thatcher on the critically acclaimed '90s drama Life Goes On. She says she is most proud of working that series, which aired from 1989-1993 and starred the legendary Patti LuPone. "She taught me how to cry and she taught me how to be kind of funny and I just watched her," Martin gushes. "I have so many amazing memories from that show and it makes me so happy when people to this day still say, 'I grew up watching you on Life Goes On.'"

After Life Goes On ended, Martin starred in Christy and began attending Yale University. In 1998, she took a break from college when she was cast as Lucy Knight on ER, the highest-rated TV series at the time. Martin played the enthusiastic medical student on the NBC drama until 2000, when Lucy was stabbed to death by a patient in a haunting episode that TV viewers still tweet about. "It's very sweet that people are still so traumatized by my death," Martin says. "Not a day goes by on Twitter where I don't get a bunch of messages about people being traumatized that Lucy got stabbed."

In addition to acting, Martin owns the children's brand Romp, co-authored the 2014 book Madam: A Novel of New Orleans, and has served as a national spokesperson for the American Autoimmune Related Diseases Association. She also produced the Hallmark TV movie Site Unseen: An Emma Fielding Mystery, which premiered last month.

And in a few years, Martin may be adding more directing and producing credits to her extensive resume, ensuring that actors like herself can see a little more gender diversity behind the scenes.

More like this
Elizabeth Debicki On Her Approach To The Most Debated Scene From 'The Crown'
By Grace Wehniainen
In 'The White Lotus,' Leo Woodall Gets His Moment
By Gabrielle Bondi
Emily Ratajkowski Believes You Should, In Fact, Get Bangs
By Rachel Lapidos
Idris Elba "Breaks Out" Of London In 'Luther' Film First Look
By Sam Ramsden
Get Even More From Bustle — Sign Up For The Newsletter