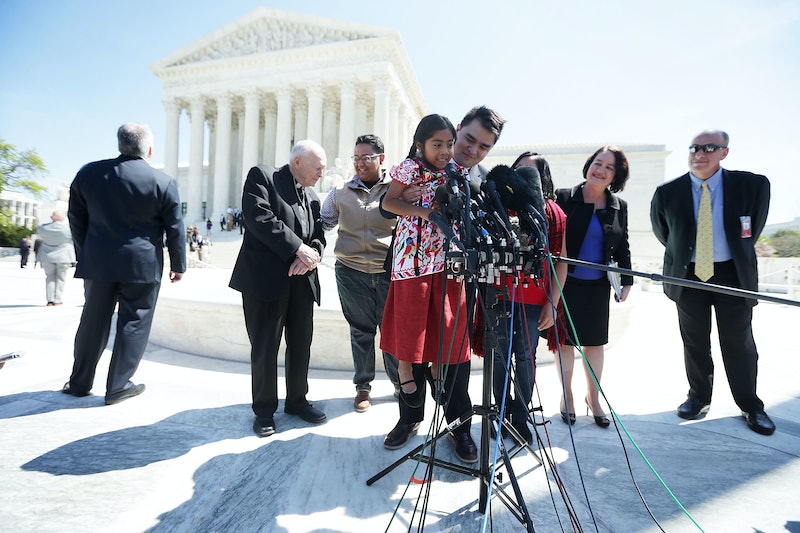 The Women's March on Washington featured a diverse range of speakers, ranging from transgender rights activist Janet Mock to Cecile Richards of Planned Parenthood. With so much going on at the march, it can be hard to decide which speeches to pay attention to, but it's clear that 6-year-old Sophie Cruz's Women's March speech is a must-watch.

"My name is Sophie Cruz and we are here together making a chain of love to protect our families," the young immigration rights activist said during a speech she delivered both in English and Spanish. Cruz, the child of undocumented immigrants from Mexico, first became well-known for delivering a message to Pope Francis during his 2015 visit to Washington D.C. After being lifted over a barrier to be blessed by Francis, Cruz delivered a hand-written letter to the pope, asking for him to help undocumented immigrants like her parents stay in the United States, USA Today reported.

Cruz had originally traveled to Washington D.C. with her family from California, where they live, along with the Los Angeles-based Full Rights for Immigrants Coalition. The coalition chose Cruz to make the trip because they "felt she could be our best spokesman," Juan Jose Gutierrez, who works with the coalition, told CBS News. "She didn't have anyone coaching her," Gutierrez added. "She just spoke from her heart."

It's clear that Cruz was speaking from her heart at the Women's March as well. The tiny activist's speech reportedly brought tears to the eyes of some audience members, M.J. Tidwell reported on Twitter. Cruz provided both a message of hope and a call to action. Surrounded by her family, Cruz reassured children in situations similar to hers, telling them "not to be afraid, because we are not alone. There are still many people that have their hearts filled with love and tenderness to snuggle in this path of light. Let’s keep together and fight for the rights."

After meeting the pope, Cruz continued her activism, hence her appearance at the Women's March. She visited the White House during its 2016 Cinco de Mayo celebration — though her parents, due to their undocumented status, were unable to attend, according to the Washington Post. Cruz has also starred in videos pushing for immigration reform, such as "Free Like The Birds" by filmmaker Paolo Mendoza. We'll have to stay tuned to see what's up next for the young activist. Knowing Cruz, it'll probably involve inspiring a lot of people.