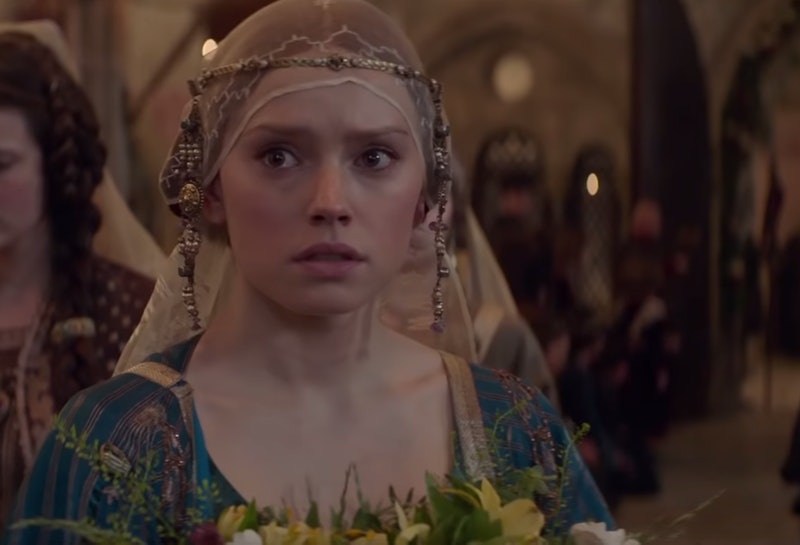 If you think you know the Shakespearean tale of Hamlet, think again. The Ophelia trailer is here and making the world rethink everything it knows about this classic literary character. Daisy Ridley stars as Ophelia, the famously misfortunate lady-in-waiting to Queen Gertrude, played here by Naomi Watts. Things begin to get complicated when the Queen's son, Prince Hamlet (George MacKay) and Ophelia fall in love embarking on a forbidden romance.

Ophelia's fate in the source material is rather bleak as she drowns herself in a river over a broken heart. But from this first look at the 2019 re-imagining, which will be limitedly released on June 28 before hitting digital and OnDemand on July 3, the character's story may turn out differently.

In the trailer, Ridley brings female ferocity to the role, much in the same vein as her Star Wars character, Rey. No longer does Ophelia seem to be a hopeless heroine, or object of the hero's affections. Instead, we see the tale through her eyes. The character seems to have more agency in the hands of director Claire McCarthy and more of her own perspective leading the narrative. There will still be plenty of familiar drama when Claudius (Clive Owen) takes the throne, but Ophelia feels less like a bystander in this adaptation.

The story of Hamlet is one as old as time and has been re-told far more than A Star Is Born, (which is really saying something). Modern big screen versions of Hamlet have employed some pretty well-known Ophelias. Helena Bonham Carter played the role in 1990 alongside Mel Gibson, Kate Winslet took it on with Kenneth Branagh in 1996, and Julia Stiles assumed the role in the 2000 modernized adaptation alongside Ethan Hawke's Hamlet.

But it has been far too long that the character has been relegated to the sidelines of this iconic play, branded crazy and lovesick. Watts certainly thinks he time for an update has never been more appropriate. In an interview with Entertainment Weekly in January, Watts said, "That's often how women have been portrayed in storytelling — as the damsel in the distress. If their mind is powerful, it must be madness. And now there’s this shift that’s taking place, and that’s reflected in this storytelling."

Director McCarthy also seemed to echo those sentiments to EW, where she discussed her motives behind this retelling of Hamlet from a new POV. "It's looking at the story and saying, 'How can we build a stronger and more dramatic way to represent these women to a modern audience and give a fresh take to the material?' " McCarthy said. The film, which premiered at the Sundance Film Festival, is based on the 2006 novel Ophelia, written by Lisa Klein, per EW. So, if late June feels too far away, viewers can get a feel for the project from its immediate source material.

Clearly, this new take on a time-honored tale aims to shake things up. By re-examining an oft-underserved character in a major work, new ideas about Ophelia will certainly emerge.