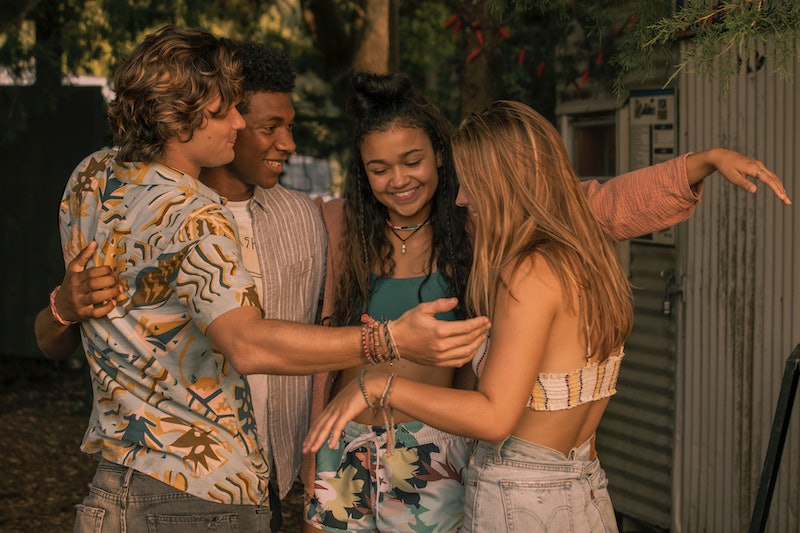 Netflix's new YA series, Outer Banks, follows a band of tight-knit teens on a dangerous treasure hunt in North Carolina. Much of the story relies upon their chemistry as a group — something the actors built by living together in the same apartment complex during filming, star Chase Stokes, who plays John B, told BUILD. And as the Outer Banks cast's Instagrams show, they became just as close in real life as their characters are on the show. "We were all four doors down from each other," Stokes explained. "Rudy [Pankow] and I ... actually lived together the whole time, which was a riot in itself. It was the central hub of every weekend shenanigan. It almost came a little too easy for all of us to be friends."

Lately, the cast has been primarily posting photos and videos from their social distancing activities, but they're all quarantined together and trying to make the most of things. "It's been about a week and a half of us causing chaos. We finished the whole Pirates of the Caribbean franchise. We started on the Harry Potter series," Stokes told BUILD, adding that they'd also built a massive fort in their living room.

Read on to learn about what their Instagrams reveal about their lives pre-quarantine.

When Stokes isn't acting as the ringleader of the Pogues, he's most likely relaxing outside somewhere, whether it's out surfing in the ocean, spending time with his pup Jack, or hanging out with his castmate Pankow.

Speaking of Pankow, this guy has an impressive collection of modeling photos on his Instagram account. He also seems to be a skilled harmonica player, so if acting and modeling ever fall through, at least he has a solid backup plan.

Cline doesn't post often, but she's recently been sharing a lot of behind-the-scenes photos with the Outer Banks cast and crew. In October 2019, she wrote that making the show was "the best summer of my f*cking life." She also apparently knows Bachelor alum Katie Morton, who commented multiple times on one of her posts. Small world!

If she's not out with her friends, Bailey is playing music. Not only can she play the ukulele, but she's also a very talented singer. Add that to her acting resume and she's officially a triple threat.

Daviss' Instagram is similarly filled with photos of his castmates and videos of him strumming the guitar, plus the occasional glamour shot.

It may not be the same as seeing your own friends, but maybe you can live vicariously through the Outer Banks cast.