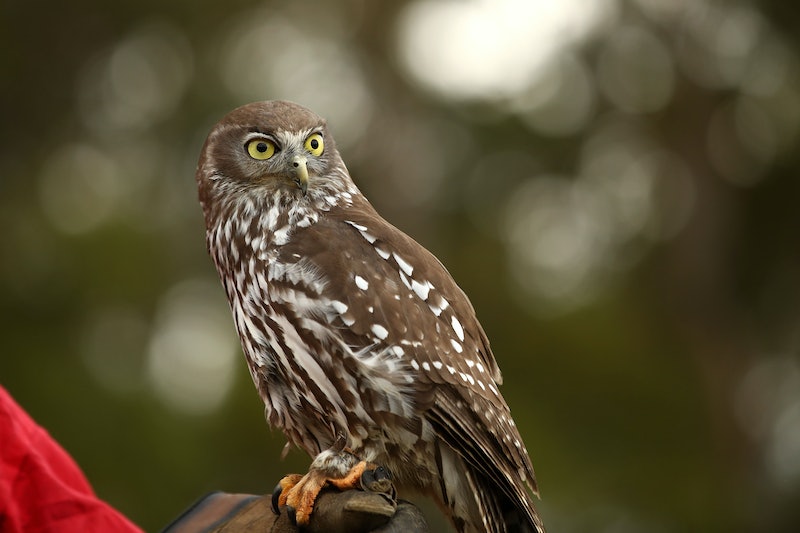 The death of Kathleen Peterson, who was found dead at the bottom of a staircase in her home, has been the subject of much fascination, starting with the miniseries The Staircase, which originally debuted in 2004. And now that The Staircase is returning with new episodes on Netflix chronicling the trial of Kathleen's husband Michael Peterson, there have been many theories floated that attempt to explain his alleged guilt or innocence. But there's one theory in particular that's catching a lot of attention, and it posits that Kathleen Peterson was attacked by an owl and fell down a staircase.

On December 9, 2001, Michael Peterson made a frantic 911 call after finding his wife Kathleen in a pool of blood at the bottom of a staircase in their Durham, North Carolina home, per NBC News. In 2003, he was convicted of her murder. Since then, according to an Associated Press report, he was granted a new trial due to a faulty testimony, and ultimately took an Alford Plea, in which he maintained his innocence while acknowledging there was enough evidence to convict him. He ended up walking free after taking the plea, because the sentence given was less than the eight years he had already spent in jail after the the first trial.

According to a report from The News & Observer, in 2010, one of Peterson's attorneys, T. Lawrence Pollard, filed three affidavits from experts supporting the theory that Kathleen was attacked by an owl on the night of her death. The report says that Pollard, also a neighbor of Peterson's, had stood by this theory years before the affidavits were filed in an effort to persuade the judge away from the murder charge.

The theory stems from two pieces of evidence that were found at the scene — a microscopic feather and a wooden sliver from a tree limb. The feather was found in Kathleen's hand along with some of her hair, and according to The News & Observer report, it was not examined during the initial trial because it was assumed that it had nothing to do with the crime being investigated.

The theory is also supported by the talon-like pair of lacerations that were found on Kathleen's scalp upon her death. In his contribution to the affidavits, Dr. Alan van Norman, U.S. Army surgeon, North Dakota neurosurgeon, and owl expert described the lacerations to have "the appearance of a trident with three limbs converging to a point at roughly 30 degrees from each other and a fourth limb converging to the same point at nearly 180 degrees from the center limb of the other three limbs." The original murder conviction claimed the cause of death to be blunt force trauma, and according to bird experts at The Audubon Society, a Barred Owl is capable of that. "A 2014 study published in the Journal of Experimental Biology notes that an owl weighing less than a pound can pounce on a mouse with force equivalent to 150 times the weight of the rodent," Audubon reported. "If a 175-pound human were struck with the same intensity, it would feel like being hit by a 13-ton truck."

Also according to Audubon, Barred Owls are known to target the head when they feel attacked, and there have been cases of them attacking joggers, and even a small boy while he was sledding. Another expert on the affidavits, Kate P. Davis, executive director of Raptors of the Rockies, located in western Montana, reiterated that owls are capable of killing creatures much larger than themselves. "That would explain the feathers found in her hand and the many hairs pulled out by the root ball, broken or cut," she wrote. "The size and configuration of the lacerations could certainly indicate the feet of a Barred Owl."

The theory resurfaced in 2017 after Peterson entered the new trial. David Rudolf, Peterson's defense attorney, filed a motion requesting access to the owl-related evidence, according to a report from WRAL News, so that it could be examined by an expert. The motion claimed another timeline, one that says Kathleen was hanging Christmas decorations, which an owl could've mistaken for prey, explaining the drop of Kathleen's blood found on the front porch. The WRAL News report disclaimed that previous reports did not say that Kathleen was decorating for Christmas before she died, rather, they say the couple had been drinking by the pool when Kathleen went inside to go to bed and tumbled down the stairs.

But whether an owl really was involved in Kathleen's death, we'll perhaps never know for sure. And now that Michael Peterson is free, the courts just might be closing the book on the entire saga.