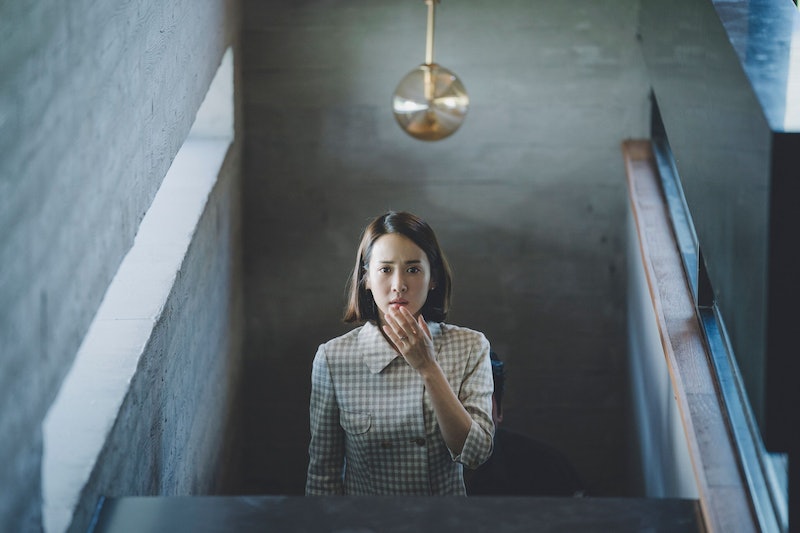 It's understandable that easily spooked filmgoers might balk at the idea of seeing South Korean filmmaker Bong Joon-Ho's latest film Parasite in theaters. The title alone suggests another monster-centric gorefest from the same director behind 2006's The Host. And the poster and trailers hints at horrific twists, so it's no wonder that some viewers are already sweating the potential scares. If you're worried that the Oct. 11 release might be too scary to handle, the Parasite Wikipedia synopsis has all the plot spoilers ready and waiting for you — but the biggest twist of all is that you don't need to read them. Only minor spoilers ahead here.

First things first: Parasite isn't a horror movie, at least not in the slasher/murder/jump-scare sense. The only thing close to a monster in the film is income inequality. The parasites in question are the barely-scraping-by Kim family, who manage to weasel their way into the employ of the wealthy Park family. Pretending they're unrelated experts in cleaning, driving, art therapy, and English tutoring, they even manage to oust the family's longtime housekeeper, who'd served the home's previous owner as well.

Some might point to the creepy poster, with members of both families with their eyes barred out and what looks like a corpse on the lawn, as proof that Parasite's going to pile up bodies at some point. While there are pale limbs that come into play in unexpected ways, the film is a drama first, a comedy second, and in distant third, a thriller that will keep you on your seat's edge, but absolutely not jumping out of it. Parasite's trailer gives the unfortunate impression there's a second-act flip to outlandish K-horror, which is only correct in the sense K-horror tends to prioritize character's psychological states over gore.

A lot of the marketing for the movie leans heavily on "warning" audiences about a twist. Director Bong even filmed a request asking audiences not to ruin the plot for others, pointing out that, "with your careful manners, we could have the best time with this movie together," and thanking viewers in advance.

Combined with the trailer and poster, this disclaimer gives the erroneous impression that Parasite is another Audition, a Japanese film notorious for its bait-and-switch, where budding romance gives way to needle-stabbing torture. While Parasite does throw a wrench in its works, it's not as extreme a shift as Audition, and knowing about it in advance doesn't take away from the film as a whole. What it does is take away your lone chance to be surprised as a viewer — again, a choice you're free to make without ruining the excellent performances and sharp plotting for yourself.

My fellow scaredy-cats out there, I can only assure you that the film's surprises aren't cheap frights. There's some blood and gore, and this film certainly has horror-based imagery, especially a repeated push-in to the top of a too-dark staircase that'll give you chills. But Bong's sharp enough to let the audience see what's coming, understanding that giving you the information builds tension far better than making you wonder where the next sudden jolt's coming from.

If you're not sure you can handle what Bong calls "surfing in the rough sea" of Parasite's unexpected turns in the video above, the Wikipedia summary will lay it all out in dry, straightforward language, still leaving you free to enjoy the film's emotional roller-coaster ride. But I can only agree with Bong that the film's best seen without knowing what's coming, especially since that'll only happen once.

If you can trust that the occasional bit of unnerving imagery doesn't make a horror movie, but instead, something much richer and sadder, Parasite will leave you pleasantly aghast, and not at what you expected.