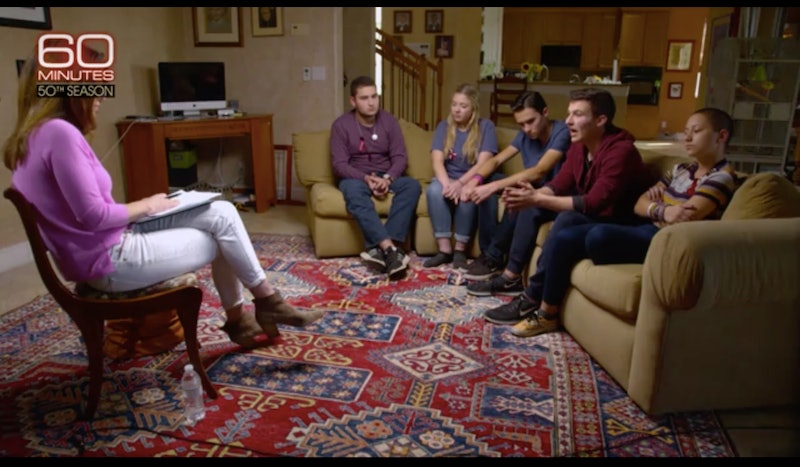 On Sunday, students who survived the shooting at Marjory Stoneman Douglas High School — and are now actively involved in gun control advocacy — sat down for an interview. During the interview, the Parkland students told CBS' 60 Minutes how they're walking the fine line of accepting some help from politicians, but never enough to let them co-opt the movement.

Correspondent Sharyn Alfonsi interviewed Alex Wind, Jaclyn Corin, David Hogg, Cameron Kasky, and Emma Gonzalez, the founders of the Never Again movement. Alfonsi described how, in the hours after the shooting at Marjory Stoneman Douglas High, which left 17 dead, the teens came together to create a gun control advocacy campaign. As Alfonsi explained, the Parkland teens conducted interviews and used social media to gain support for their cause, ultimately organizing a national school walkout day and convincing Florida's governor to raise the age for buying a rifle to 21 — among other endeavors.

Toward the end of the interview, Alfonsi asked the students how they "make sure people aren't using them for their [own] specific agenda," citing the millions in donations the students' movement has received since its inception.

In response, Kasky replied, "Well, we don't let them. You see, that's the thing. We all remember everybody has an agenda."

He also added that while the students certainly seek help to move their advocacy initiative forward, they do not let others dictate the direction of the movement: "[E]verybody who tries to call the shot for us, we respectfully say, 'That's not what this is about.'"

The students noted that the same rule also applies to politicians — specifying that the group refuses to offer their endorsement to anyone who works for the government.

"Politicians have asked us to endorse them," Kasky explained. "Nope. You can support us all you want, but if you think you can get your hands on our movement? It's just not gonna happen."

Alfonsi also asked if the students had "turned people away who have offered money?" In response, Kasky affirmed that they have chosen to do so: "Because they said, 'Here's some money if you do this.' The second we get an 'if,' sorry. It's gone."

During the interview, Alfonsi also described how much the students lives have changed since the shooting at their high school. They have been deeply involved in national and local advocacy for gun control measures and, one student in particular, Gonzalez, has almost become the face of the movement — that's in part because she gave a rousing and widely-publicized speech condemning lawmakers for their inaction on gun control shortly after the shooting, drawing national attention.

But not all of the changes these students have been experiencing are good. For example, the students described how they've been receiving death threats since their movement began. In fact, they're so concerned about the threats that they refuse to reveal the location of their recently-donated headquarters for their movement out of fear that it might be attacked.

Gonzalez went on to describe how she's never going to be the same person that she was prior to the shooting, implying that the national attention she's received has come as a bit of surprise.

I have no choice [about being involved in the movement] because there were — there were CNN cameras there. My speech was broadcast all over the country in, like, four seconds, and I had no idea they were going to be there. I'm not upset at that. I'm just never going to be the same person again.

Overall, the students' interview highlighted both the challenges and courage associated with their movement. It is very clear that the Parkland teens are not letting anyone take ownership of their campaign — and that they are highly committed to ensuring that rapid and effective action is taken to help end gun violence.