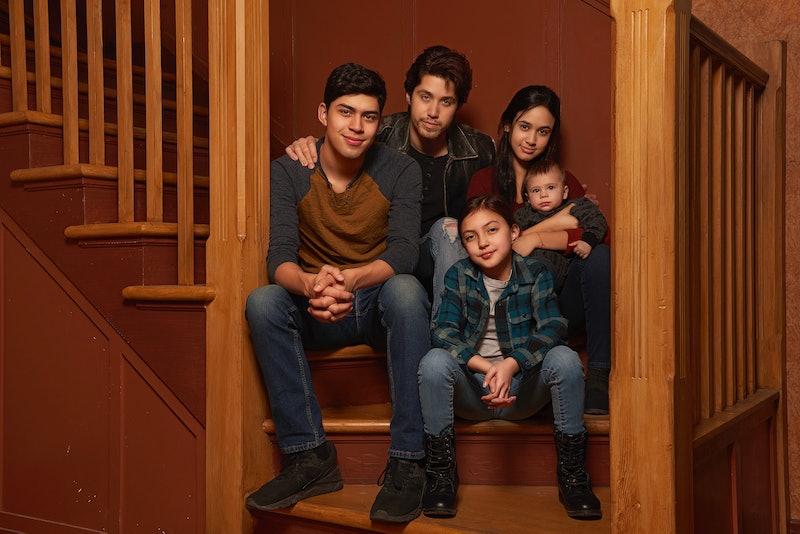 At a time when reboots and revivals are happening left and right, burnout from redos of shows and movies can become prevalent. However, when there's a completely new take on an old idea, it's worth checking out. The new Party of Five reboot trailer does just that, using similar characters and plot outline from the 1990's drama of the same name, but giving it a lot of relevance that is needed in today's television.

This new reboot is giving the 1994-2000 series, about five siblings who struggle to keep their family in tact after their parents die suddenly, new life, re-working the show. In the original series, which starred Scott Wolf, Matthew Fox, Neve Campbell, and Lacey Chabert, as four of the five Salinger kids, their parents died in a car accident. In the 2019 reboot, the five kids in the Buendia family are torn apart from their mom and dad by ICE when their parents get deported to Mexico. The oldest child Emilio (Brandon Larracuente), is a DACA recipient, while the rest were born in the States. So, though they have the technology to keep in touch with their parents, they soon face another crisis when Emilio's status in the United States becomes a topic of worry for the family.

What also makes this reboot different than most is the fact that the same team behind the first series are the ones in charge of this 2019 version. Co-creators Christopher Keyser and Amy Lippman returned to write the pilot's script, and are at the helm of it all. And, given the relevant, and sensitive, nature of the update, they said that they consulted with many who've gone through this to make the story more authentic, according to Variety. And if you're worried about non-Latinx writers telling this story, Keyser told Deadline in February that they were looking to fill the writer's room with Latinx and immigrant writers, to ensure that the show be authentic and representative as possible.

At the TCA surprise panel for Party of Five in February, Lippman said that at an initial test screening, one question many had was why the father hadn't applied for his citizenship all this time. “There is no path to citizenship — this is what it is like,” she said, via Deadline. “If you have come here [as an undocumented citizen], there is no path to citizenship unless you go back to your country.” Clearly, the lack of knowledge when it comes to immigration and undocumented individuals affected early viewers, which only shows why a show like Party of Five is so important in today's mainstream media.

That said, Lippman insisted that the show didn't have a political agenda, but just reflected the times. "We don’t want to go in with a strong political agenda,” Lippman said. “If it makes it political — that’s what’s going on in the country."

Furthermore, the co-creator added that this storyline was the only thing that made sense for a Party of Five reboot. “As we began to see the political climate and stories like this on the front page of every newspaper, we began to realize that what we imagined as a family of orphan[s] 25 years ago had transmogrified into a family of kids living without their parents," Lippman explained, as reported by Variety.

Whether you've seen the original or not, the new Party of Five seems like it'll offer a rich story that brings the original forward, while also centering a mainstream show around an immigrant family at a time when Latinx people are increasingly vilified by those in power. From the trailer alone, it's clear this show isn't just a reboot or a tearjerker, it's also necessary.

More like this
Netflix Reveals First Look At Wednesday In The 'Addams Family' Spinoff Series
By Bustle Editors
A New 'And Just Like That' Table Read Pic Confirms A Key Character's Return
By Jack Irvin and Grace Wehniainen
24 Years Ago, 'Friends' Dropped Its Most Underrated Ross & Rachel Episode
By Grace Wehniainen
The 'Skins' Cast Shared The Reunion We’ve Been Waiting For
By Sophie McEvoy
Get Even More From Bustle — Sign Up For The Newsletter