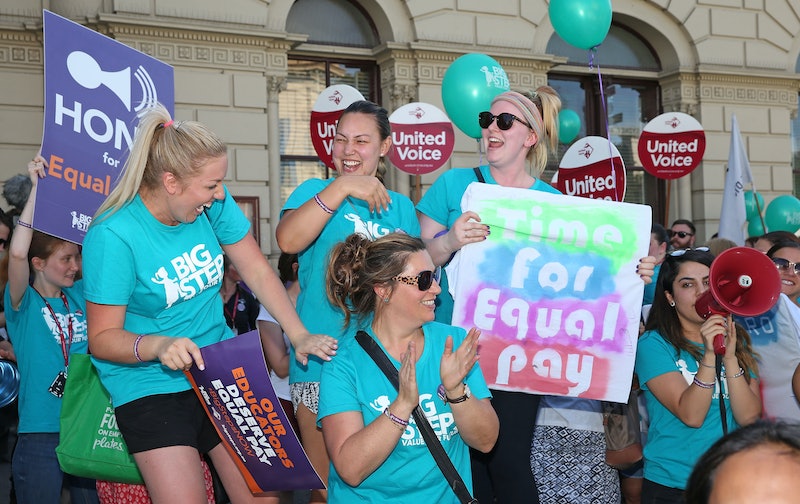 While the United States has inched closer to gender equality over the last few decades, the pay gap has remained largely unchanged. But the fight to end wage disparity still has many strong champions, including Sen. Patty Murray (D-Washington) and Rep. Rosa DeLauro (D-Connecticut), who reintroduced The Paycheck Fairness Act on Wednesday.

The proposed legislation builds on the 1963 Equal Pay Act (EPA) to address its "loopholes," as Murray explained in a press release. That groundbreaking law made it illegal for employers to pay men and women differently for the same job — but in practice, the EPA has been difficult to enforce. According to the American Association of University Women (AAUW), the gender pay gap has improved by less than 5 cents since the '90s. The average women working full-time makes 80 cents for every dollar a man makes. Black women make 61 cents of each dollar paid to a white man; Native American women make 58 cents to that dollar; and Latinas just 53 cents.

The Paycheck Fairness Act is designed to address these persistent disparities. According to an AAUW analysis, the law would provide protections for workers who file wage discrimination claims or discuss salaries with colleagues and forbid employers from looking at workers' salary histories, which can perpetuate pay gaps. It would also compel employers to prove that any pay gaps are caused by differences in job responsibilities or skills, as well as fund programs that train women how to negotiate for higher salaries.

House Speaker Nancy Pelosi (D-California) and Rep. Alexandria Ocasio-Cortez (D-New York) were among those who championed the bill during a press conference on Wednesday. Ocasio-Cortez brought up the story of a friend who'd been "secretly circulating" a Google Doc of their colleagues' salaries to increase transparency.

"The wage gap is an injustice that persists through secrecy," Ocasio-Cortez said, specifically praising the Paycheck Fairness Act for its provision allowing workers to talk about their wages at work. "Those who say that the wage gap does not exist and that it's a myth," she said, "should have no problem proving that by allowing the disclosure of salaries in the workplace."

The gender wage gap hurts families, communities, and the economy, Democrats explained. "This legislation addresses the issue in a comprehensive and sensible manner," DeLauro said her press release. "Our diverse and energetic Congress is poised to act on this legislation, and I look forward to its swift passage in the House of Representatives."

Every Democrat in the House (plus one Republican) and 45 senators have co-sponsored the Paycheck Fairness Act. But that's not enough to ensure its passage; the act has been introduced many times in the past without gaining majority support. According to MSNBC, congressional Republicans have previously argued that the bill isn't necessary since the EPA outlaws pay discrimination, arguing that new accountability measures might discourage businesses from hiring women.

Still, the climate in 2019 is markedly different than in the past. Maybe this will be the year that the Paycheck Fairness Act is passed, after all.