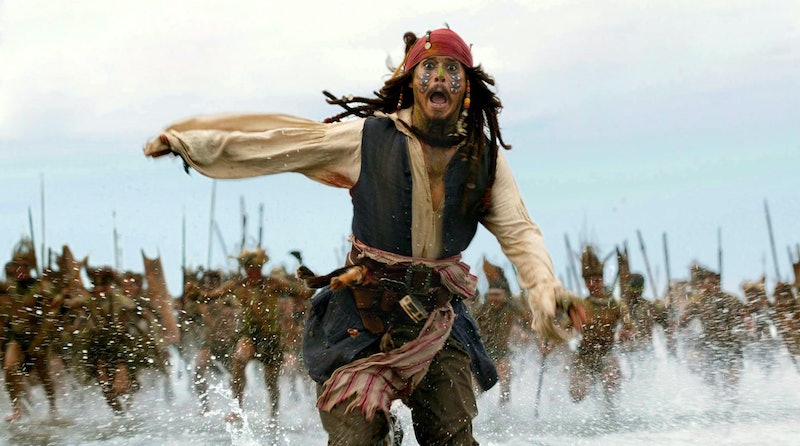 It's hard to believe that the first Pirates movie Pirates of the Caribbean: The Curse of the Black Pearl started as a movie based on a theme park ride. But, 14 years and three follow-ups later, the Pirates franchise has officially eclipsed the Disneyland attraction, so much so you'll need a Pirates movie franchise recap before you go see the fifth film, Pirates of the Caribbean: Dead Men Tell No Tales. Of course, if you'd rather watch all four Pirates movies, you're more than welcome to. Just be ready to spend an estimated 10 hours of your life battling pirates and sailing the high seas.

Even the most die-hard Pirates fans (I'm talking to you, person with an entire Captain Jack Sparrow costume in your closet) are going to need a recap before Pirates 5 hits theaters. The last Pirates film, On Stranger Tides, hit theaters six years ago, in 2011, and it's been 10 years since the original trilogy was completed. If you can keep track of all the ghosts, pirates, and pirate ghosts that have haunted our heroes Jack Sparrow (Johnny Depp), Will Turner (Orlando Bloom), and Elizabeth Swann (Keira Knightley), then this recap is not for you. But, if you're just a rum-loving pirate wannabe like the rest of us, you're going to need a brief refresher. And so, I present to you: previously in Pirates of the Caribbean...

The movie that started it all, The Curse of the Black Pearl, begins with our plucky everyman hero, Will Turner. Will is an orphan and blacksmith apprentice who is hopelessly in love with Elizabeth Swann, the governor's daughter. When Elizabeth is kidnapped by Captain Barbossa (Geoffrey Rush) of the black pearl, Will recruits Captain Jack Sparrow, a drunk pirate without a ship, to find her. Together, Will and Jack track down Barbossa's ship, the Black Pearl, and break a curse that rendered all of Barbossa's men immortal, thus allowing them to defeat Barbossa and bring Elizabeth safely home.

In the second film, Dead Man's Chest, Will and Elizabeth's wedding is interrupted when they are arrested for letting Jack escape at the end of The Curse of the Black Pearl. Will makes a deal to find Jack and bring back his magic compass in exchange for his freedom. But, when he finds Jack, the Captain is himself in a bit of a pickle. He's being forced to join Davy Jones's crew on the Flying Dutchman to settle an old score. Davy Jones is a sort of supernatural pirate, and he will feed Jack to the Kraken if he doesn't submit. By the time Will and Elizabeth find Jack, the Kraken has already been called, and in order to save their crew, Elizabeth sacrifices Jack to the Kraken. The film ends with the entire crew vowing to rescue Jack from his mysterious purgatory with the help of old Captain Barbossa.

At World's End completed the original trilogy and concluded the story of Will and Elizabeth (or so we thought). The third film is by far the most confusing of the series, but what you most need to know is that in order to save Jack and defeat Davy Jones, Will and Elizabeth end up sacrificing their happily ever after. To save Will's life during battle, his father Bootstrap Bill, a member of Davy Jones' crew, cuts out his heart and makes him the new captain of the Flying Dutchman. Will lives, but he's cursed to travel the seas and escort souls lost at sea to the afterlife, only allowed to set foot on land once every 10 years. Before he leaves on his first stretch, Will and Elizabeth are married, and when he comes back 10 years later, it's to see Elizabeth and his son.

This is marks the last time audiences saw Will and Elizabeth, both of whom have small roles in Dead Men Tell No Tales, as well as their son Henry Turner, who plays a major role in the new film.

On Stranger Tides attempted to reboot the Pirates franchise, with a brand new cast of pirates joining Jack Sparrow and Barbossa. First, there's Angelica (Penélope Cruz), Jack's ex who is using his name to recruit a crew to travel to the Fountain of Youth. Angelica and Jack end up with Blackbeard (Ian McShane), Angelica's father, on a trip to find the Fountain of Youth while Barbossa mounts his own expedition. It's unlikely that any of On Stranger Tides will feature heavily in Dead Men Tell No Tales (neither Cruz nor McShane are set to appear in the new film). The only really important detail audiences will need to know is that Jack Sparrow is in possession of the Black Pearl again, but it's been magically shrunken, and Barbossa has Blackbeard's magic sword and is in control of his ship, the Queen Anne's Revenge.

Quick final recap: Will is the new Davy Jones, cursed to sail the seas until someone else cuts out his own heart and becomes the new Davy Jones. Jack Sparrow is desperately trying to get the Black Pearl back and is still a pirate. And Barbossa is now a pirate with a magical ship. And that's what you missed on Pirates!