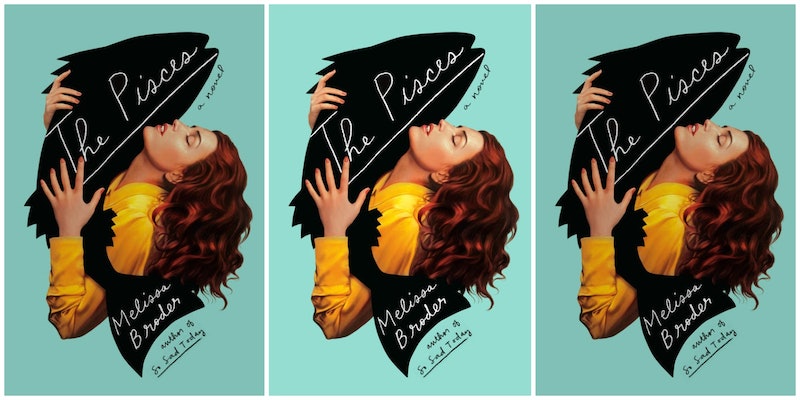 Storytellers have been fascinated with sirens and mermaids since the beginning of time, and that infatuation hasn't waned — just look to the latest Academy Award winner for Best Picture for proof. But in her debut novel, The Pisces, poet and essayist Melissa Broder puts an entirely new spin on the traditional mermaid tale.

Here's the summary: When Lucy, a struggling classics graduate student, breaks up with her long-time boyfriend, she unexpectedly spirals into desperation and loneliness. She decides to get out of town and spend the summer at her sister's home on the beach in Venice, California. During those few months, she dog-sits her sister's pup, attends group therapy for sex and love addiction, and goes on a myriad of not-so-great Tinder dates. But most importantly, she mysteriously meets a mysterious, attractive swimmer named Theo on the beach — and later discovers that he's a merman. The two strike up a steamy romance that escalates quickly.

The idea for the novel came to Broder on the beach in Venice, as she read The Professor and the Siren by Giuseppe Tomasi di Lampedusa. "I started to think about how nothing really sort of captures that dichotomy between love and self-destruction quite like the siren-human relationship," Broder tells Bustle. "I had never thought very much about how the mermaid figure embodies that darkness... You know, how many men in literature have, like, dove off the back of boats in search of another taste of that nectar, and they were sort of rendered unable to live on land peacefully after that, and so I ended up thinking, It's always these men diving in after mermaids. Why can't it be a merman and a woman, and why couldn't it happen now?"

With that idea in mind, she began to write a story that's not a retelling of a traditional siren myth, but a journey all its own.

"It's always these men diving in after mermaids. Why can't it be a merman and a woman, and why couldn't it happen now?"

But siren mythology isn't the only classic influence upon the work. Lucy's thesis — which has been a work-in-progress for years — centers on Sappho and how readers interpret the missing gaps in her work. "[Sappho's] writing is so full of longing, what we have left of it really mirrors the theme of the book," says Broder.

Since only fragments of Sappho's work have survived, scholars have long butted heads about the truth of Sappho's life, identity, and sexuality. "For me, I was much-less concerned about writing the book about Sappho's bio than the universality of longing and sort of addictive love that comes through in her work," Broder says.

Love as addiction is an important theme in this book and Broder's previous works. Throughout the story, Lucy attends a regular group therapy session for love and sex addiction, and her therapy group is comprised of a colorful cast of women, each dealing with her own heart-wrenching relationship issues. "It's women, ultimately, who save Lucy's life," Broder says.

"...I was much-less concerned about writing the book about Sappho's bio than the universality of longing and sort of addictive love that comes through in her work."

Lucy is pretty cynical about group therapy throughout the book, but it's clear that Broder sees power in community and healing. "But I guess my message there is that the medicine can work even in spite of ourselves if we just give it a little bit of a chance — just because there are things we feel resistant about doesn't mean that the medicine doesn't work," she says.

Broder also draws parallels between the modern relationship struggles of Lucy and the relationship struggles of the women of classic literature. The stories aren't all that different, when you dive deep into the emotions of the stories. "Sappho was writing about these themes and her devastation so long ago — none of this is new," Broder says. "'Hook-up culture has existed. There was no Tinder but projecting a fantasy, a desire to live in a fantasy, expectations that don't end up being met [...] None of this is new."

Lucy's difficulties with relationships are not magically solved, but rather highlighted, as she embarks on her affair with Theo. As you might imagine, writing sex scenes about intercourse between a human and a merman was a difficult and utterly unique challenge. Broder drew on her experience as a poet to craft those scenes with delicacy and sensuality. "As a poet you can do anything. As long as you teach the reader the constraints of the world, you can do whatever you want," she says.

The first challenge was figuring out Theo's anatomy. "Once I decided that it was a merman, I knew that my merman had to have a dick. I just knew it," she says. "Although it's funny, because I didn't think about his ass for a while and then I kind of had to revisit his ass. And then I was like, well, okay, the tail starts below the dick, the tail starts below the ass, all right he has a flesh ass. But once I had him built, it was very easy to write the sex scenes."

"As a poet you can do anything. As long as you teach the reader the constraints of the world, you can do whatever you want."

While having sex with a merman is not something that happens in everyday life, Broder was committed to making the experience as realistic as possible. "Within the fantasy sex, I had a lot of commitment to the reality of at least my own difficulties with pleasure and my own self-consciousness," says Broder. "So, she may be having sex with a merman, she may be living out that fantasy, but she still is, like, nervous that it takes her a long time to come. [She] is saying to him, like, asking for permission, 'Is it okay if I take a while?' Even if I'm living in my fantasy, I still have that self-consciousness that's built in. [I] feel really committed to the realism, to the difficulty of the relationship between being a woman and feeling entitled to pleasure."

As Lucy's fascination with Theo intertwines with her personal struggle, The Pisces unfolds into a hypnotic, thoughtful story that asks readers to question how they interact with the concept of love. But be warned — once you dive in to this magnificent book , you're not going to be able to tear yourself away.