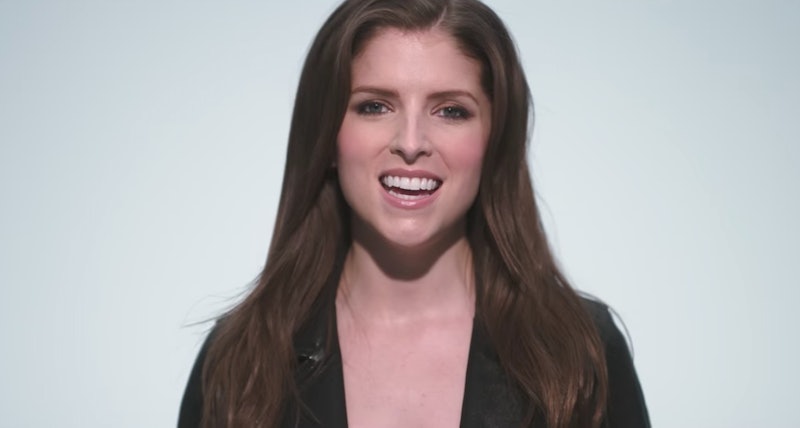 Whether you're all about the Bellas or just love George Michael at his catchiest, this news will put a spring in your step: the Pitch Perfect 3 cast remixed "Cups" by teaming up with contestants from The Voice in a video. The clip delivers the "Cups"/"Freedom! '90" mash-up you didn't know you wanted, and the end result is delightful. But if that seems like a totally random choice of songs to mix together, you'd be wrong. The 1990 hit's lyrics and the song's focus on how freedom and music make for happiness, not fame and riches, are a pitch perfect fit for a third movie, which is all about the Bellas realizing that, even if their professional lives aren't everything they'd dreamed of, having the freedom to travel the world and sing might cheer them up.

According to The Hollywood Reporter, the third installment in the Pitch Perfect franchise will focus on many of the gang after they've graduated and are struggling to find their way professionally. They resolve to reunite as an a capella team to go sing internationally as part of the United Service Organizations tour. It's an interesting new progression for the Bellas, who, at the beginning of Pitch Perfect 2, were the three-years-in-a-row ICCA champions, were performing in front of President Barack Obama, and who closed the film back on top, despite Muffgate, when they win the World Championship Finale.

Of course, despite the Bellas' success, the franchise's message has never been about fame being the quickest way to happiness. Instead, the films have always delighted in showing, not telling, just how joyful goofing around and making music can be. Which makes the choice of "Freedom! '90" to mix with "Cups" a particularly apt one. Yes, the song pretty much does what it says on the tin, extolling the wonders of, you guessed it, freedom. But, in the first chorus, the song makes clear that freedom and music are interlinked.

In the opening verse, Michael sings: "Gotta have some faith in the sound/It's the one good thing that I've got." We see that this line, "Gotta have some faith in the sound," is central to the song, with it recurring in the chorus. Since Michael sings "Freedom" over the top of the line, listeners could be prompted to see the two ideas as interwoven. Maybe it's about finding a sense of freedom in music.

Which would make it a great fit for the new movie. After all, instead of bemoaning the lack of things holding them in place, the Bellas appear to be about to take advantage of the relative freedom that recent graduates have to go do what they love best and sing together. Maybe the characters will be channeling another great line from the track, "Now I'm gonna get myself happy."

The song is all the more apt for how dismissive it is of fame and fortune. Michaels sings of being a young boy who "didn't know what I wanted to be" and who opted for easy, superficial pleasures: "Brand new clothes and a big fat place/On your rock and roll TV." But each of the verses describing his previous hedonistic existence ends with a resolve to change something, "I'm gonna get myself happy." The Bellas already got to experience insane levels of fame in the second movie, and, at least at the beginning of the film, that brought them more problems than happiness.

Hopefully, the soaring optimism of Michael's hit mixed with the Bellas' own hit "Cups" signals to us that the a capella friends will find joy in doing the thing they love most while on the road. As Michael's song suggests, getting to make music and enjoying an untethered existence are underrated luxuries that outrank even the nicest threads.