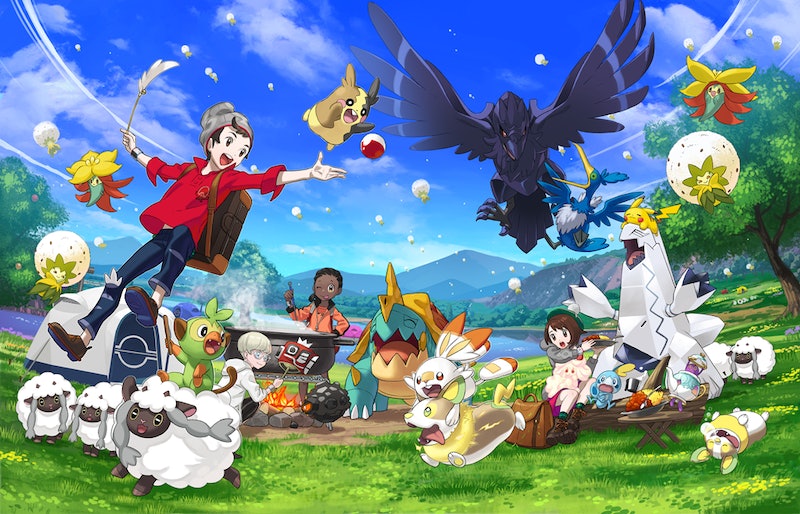 Nintendo kickstarted September off with yet another Direct, which gave Pokémon fans another opportunity to see what Pokémon Sword and Shield will entail. The release of the games may only be a couple of months away, but that hasn't stopped the developers from teasing what's to come. And since the region of Galar is based on the UK, a lot of references to English life were showcased, including a diverse landscape and a love of curry. On top of that, two new Pokémon were revealed in the Sword & Shield trailer, and they're about as British as you can get.

First, let's spill some tea. No, I'm not talking about the National Dex drama, I'm referring to the adorable teapot-inhabiting Ghost type Pokémon Polteageist. It was only a matter of time before the UK's love of tea was referenced, and what a better way to do it than have a spirit that can possess the drink itself. Well, that's what it looks like anyway.

Polteageist's official description notes that its body is "made from black tea", but that it can also "pour [its] power into leftover tea" to create even more Polteageists. It also seems that the Pokémon can disguise and hide within other items of tableware, so there could also be variations to its design. Either way, it's an adorable ghost (just look at those little legs!) that I cannot wait to play with during my journey through the Galar region.

On the flip side, fans were also introduced to one of Galar's regional bird Pokémon called Cramorant. This Flying/Water type Pokémon is very greedy and has a knack for fishing, which blends perfectly into its ability 'Gulp Missile'. Whenever it uses the moves Surf or Dive, Cramorant "will return with a fish in its mouth." If it happens to be attacked while holding its catch, "Cramorant will retaliate by spitting out its catch at the attacker".

If you hadn't already guessed by the name, this Flying/Water type Pokémon is based on the Cormorant, a large water bird found on the English coast or inland waters. The RSPB describes the Cormorant as a "supreme fisher", which has also caused them to be referred to as "sinister" and "greedy" as the often interrupt anglers when reeling in their catch. So kudos to Pokémon's developer Game Freak, as the design of Cramorant and its behaviour are pretty spot on!

Cormorants can be found anywhere along the coast of the UK, but they "increasingly being seen inland at reservoirs, lakes and gravel pits" according to the RSPB.

Polteageist and Cramorant join a whole host of British-inspired creatures that live in the Galar region, including the Welsh corgi Pokémon Yamper, the sheep Pokémon Wooloo, and the raven Pokémon Corviknight. Regional variants of previous Pokémon were also introduced last month, including the Zigzagoon line which it seems has now been redesigned to resemble badgers, including a new evolution in the form of Obstagoon.

While Pokémon Sword & Shield's release isn't too far away, it wouldn't surprise me if a few more Pokémon were announced before fans actually get their hands on the game. I wonder what other British creatures and delicacies will make their way into the Galar region?

More like this
This Wordle Rival Is Taking Social Media By Storm
By Sam Ramsden
'The Last Of Us' Has Officially Been Renewed For Season 2
By Darshita Goyal
8 Easter Eggs From Taylor Swift's “Lavender Haze” Music Video
By Shahed Ezaydi
Rupert Grint Just Shared A *Major* Update About Ron Weasley’s Future
By El Hunt
Get The Very Best Of Bustle/UK
Sign up for Bustle UK's twice-weekly newsletter, featuring the latest must-watch TV, moving personal stories, and expert advice on the hottest viral buys.