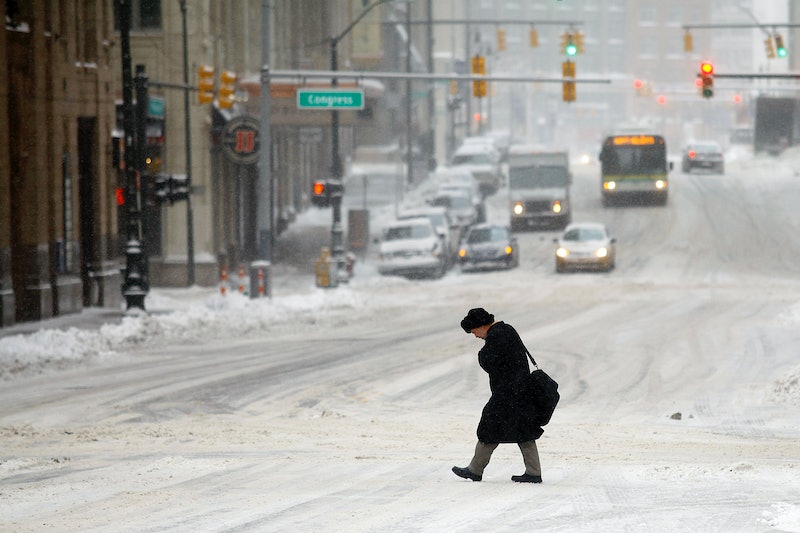 Extreme weather conditions in the Midwest this week have led people to take unheard of precautions. The United States Postal Service can't deliver mail everywhere. There are possible "frost quakes" in Chicago. And in some places, there's an even more unthinkable disruption — the polar vortex is preventing beer deliveries in some parts of the Midwest.

It's so cold in some areas that beer will freeze on the delivery trucks before it even reaches its destination, according to CNN. And as you may be aware, frozen beer is not good beer. It's still technically drinkable, but it tends to lose its carbonation, and the alcohol may separate from the water. Basically, it won't taste good — and many beer distributors in Minnesota aren't willing to risk it.

2019's polar vortex is breaking records for cold temperatures in numerous states, according to AccuWeather. Minnesota's been hit especially hard, with the lowest actual temperature measurement coming in at -56 degrees in Cotton, Minnesota, and the lowest temperature with wind chill at -77 degrees in Thief River Falls, Minnesota.

"There's a few (distributors) that have heated trucks," Madigan told CNN, referring to basically the only way that beer distributors could beat the chill. "But there's not many. You tend not to need heated trucks."

This is just another tragic consequence of climate change. The incursion of the polar vortex into the northern part of the United States is a phenomenon that has become much more likely with a warming planet, according to The Guardian. While the planet's normal wind and air movements usually keep the swirling arctic air otherwise known as the polar vortex far above the arctic circle, nowadays changes to the jet stream and processes with melting arctic sea ice are causing it to head in a southerly direction sometimes. In all likelihood, these weather events will become more common as the planet continues to warm, according to Vox.

Even once beer deliveries are able to resume in the Midwest, beer lovers should still be worried about climate change's effects on their favorite beverage. A study released in October found that climate change will likely cause a beer shortage, according to Smithsonian.com, as all beer ingredients are crops that would be vulnerable in extreme weather. This would cause the price to shoot up, making even cheap beer a luxury for many — and craft beer a very expensive habit to maintain.

So while the temporary disruption in beer deliveries is troubling, the severe droughts that hit Europe in the summer of 2018 are far more troubling. If big hop-growers and beer-producers such as Germany and the Czech Republic have more and more dry summers like that one, the weather will eventually become a big problem for anyone who enjoys sitting down with an Erdinger or a Pilsner Urquell.