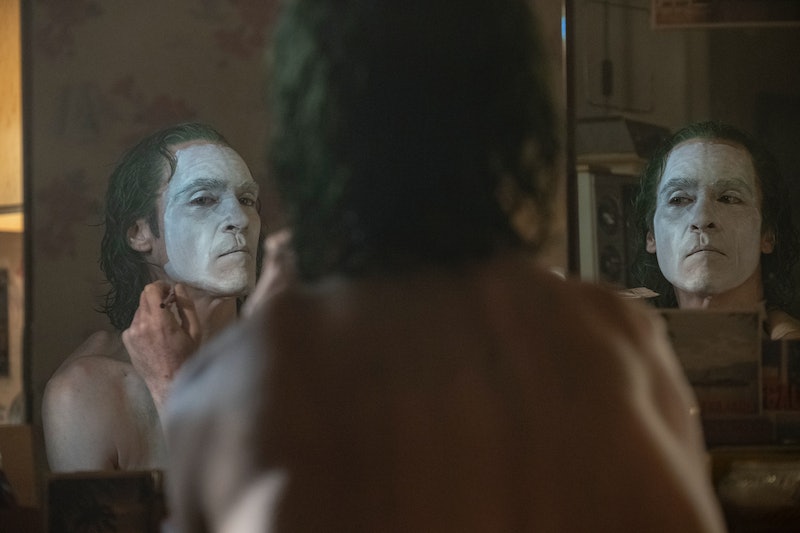 Spoilers ahead! Joker is a sharp turn away from DC's previous comic book films, with superpowers replaced by a realistic character study detailing the genesis of Batman's nemesis. The film attempts to show a disturbed man broken by society reborn as the chaotic inspiration for an uprising against Gotham's real criminals: the indifferent rich. But the movie's muddled thesis, which entwines the anarchic, entitled energy of underground message boards with the ideals of Occupy Wall Street, weakens Joker's attempts at social and political commentary and is ultimately hollow.

Before the Joker finally appears in full name, costume, and attitude, he's Arthur Fleck (Joaquin Phoenix), a meek clown-for-hire in late '70s/early '80s Gotham. The city is a clear stand-in for New York during the same time period, when crime rates were at their highest and rising, and President Ford's refusal to bail out the nearly-bankrupt city prompted the infamous New York Daily News headline "FORD TO CITY: DROP DEAD". City life is grim, but Arthur makes the best of his precarious, pitiful existence, visiting an overburdened social worker (Sharon Washington) to get medication for his undefined neurological condition (which includes pathological laughter, natch), taking care of his ailing mother (Frances Conroy) in their crumbling apartment, and genuinely enjoying his work, despite getting jumped on the job by teens. When a sleazy coworker calls Arthur's attackers "animals" and gives him a gun, Arthur counters, "they're just kids". He's down, but not yet out, on society.

Arthur's mother stumps for gubernatorial candidate Thomas Wayne (Bruce's father, played by Brett Cullen), who's running a tough-on-poors campaign and slashes the city's social services. At what turns out to Arthur's last check-in session (the news is sprung on him at the meeting), the first larger break between Joker's intent and execution occurs. The social worker, a beleaguered black woman, tells him, “They don’t give a sh*t about people like you. And they really don’t give a sh*t about people like me.” Arthur, ignoring what she just said, accuses her of never really caring about him, that this was just her job, as if this woman wasn't just commiserating that life is terrible for all of them in this city and far worse for her as a woman of color.

Arthur's inherent belief he should — nay, deserves — to be cared for and paid attention to is something the film arguably realizes is selfish. With clear references to films like Taxi Driver and The King Of Comedy, both following disturbed protagonists increasingly out of step with reality, Joker could be seen as a similar portrait; after all, it's an origin narrative for DC's major villain. But any suggestion of this, or Arthur's responsibility for his actions are lost amid Joker's ham-fisted attempts to point the finger at the wealthy.

Arthur's left without medication and begins to unravel under day-to-day pressures, all of it culminating in a subway confrontation directly echoing New York's infamous 1984 "Subway Vigilante" shooting. A man named Bernhard Goetz shot four black youths he thought were going to mug him before fleeing the scene. (After a lengthy legal process and a lot of public support, he was found guilty only of criminal possession of a handgun.) In the film, Arthur is mocked by drunk finance suits after asking them to leave a woman alone, also shooting them and fleeing. Just like Goetz, Arthur is celebrated by citizens tired of feeling oppressed, but the focus of ire is now white, successful men. Joker adds the modern twist of public protestors donning clown masks, which may be an attempt to tie the 2011 protest Occupy Wall Street's use of another DC comic character, V from 2005's V For Vendetta, as catchall symbol of protest to Arthur's vigilante action.

Here's the difference: in that story, V was an "undesirable" experimented on in government concentration camps who killed specific government officials, partly for personal revenge but foregrounding and encouraging a general uprising via terrorist actions (necessary as all other forms of rebellion were quashed) to create a better world.

Joker, on the other hand, is "created" by an existing dystopia, one where all assistance is cut to the point that Arthur is left adrift. Arthur's rage is personal and no broader, focusing on those who've personally wronged him, yet the clown mask becomes a symbol of a city tired of a two-tiered class system. Arthur is so myopically self-focused he doesn't even know he's become a citywide icon until he gets on a subway full of clowns... dressed as one, because it's his ultimate becoming of himself.

It also doesn't help that Joker undermines the idea of the wealthy working for their own interests being the real villains by making those bearing their brunt pretty unlikeable too. The protesters on the train don't care about politics, they just want anarchic violence, which is the same accusation incorrectly lobbed at most political protests by those being protested. Again, that might've been intentional; director Todd Phillips is no stranger to exploring unappealing people (his student film on filth rocker G.G. Allin, for example), but if a point was being made, it's too vague to read as commentary.

Arthur claims he feels "much better" after stopping his medication, like he's come into his true self, and it's this ill personality that's embraced by chaotic destroyers. That's a terrible message about both mental illness and the motivation behind civic protest, both of which erupt into all-consuming destructive fury by the film's end. It would seem like a parody of ignorant stereotyping, if it wasn't treated with such gravity by the film.

Joker has been the subject of much handwringing from cultural gatekeepers fearful the film will incite violence. A similar argument was made about Spike Lee's Do The Right Thing over 30 years ago and was just as foolish-sounding then. And unlike this film, Lee's actually has political depth and resonance. Joker's anti-hero avenger inspiration becomes the very thing the film's supposedly against. When Arthur finally becomes Joker, he's just fully leaning into breaking the social contract and focusing on himself, just like the film's wealthy. With vague politics a thin veneer over personal and selfish rage, the only thing Joker might incite is a legion of terrible Halloween costumes.