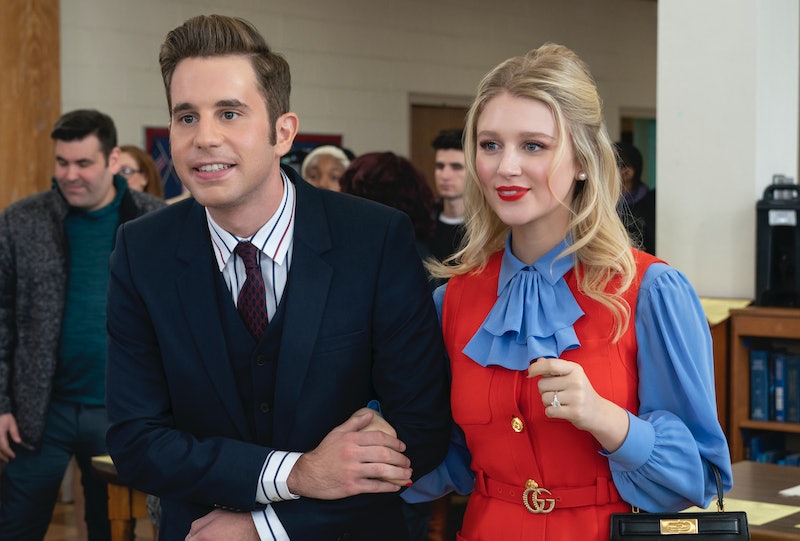 The Politician is back on Netflix, but this time, instead of Payton (Ben Platt) running for high school student body president, he's running for Senator of New York. Still his campaign staff remains the same, including Infinity Jackson (Zoey Deutch), who is fighting for climate change and works side-by-side with the bunch. Payton’s opposition is Dede Standish (Judith Light) and her inimitable Chief-of-Staff, Hadassah Gold (Bette Midler).

With a much more established pool of players this season, Payton’s wardrobe has been elevated. The character always looked tailored throughout Season 1, but that aesthetic reaches new heights this time around. "There was so much growth from last season and that kept evolving as this season progressed as well," The Politician costume designer, Claire Parkinson tells Bustle. "Each character has matured and continues to do so in season 2."

For Payton specifically, that means he's still wearing "monochromatic looks like season 1, but in a more grown up elevated way." Other characters like Alice (Julia Schlaepfer) got a Season 2 upgrade too, as "she has grown up from the pastel sweater set girl from her youth to a more serious woman who dresses with a mature confidence."

Bustle spoke to Parkinson about all the looks she designed for season 2, from Midler and Light’s borrowed vintage jewelry to Platt’s classic suiting. Get all the inside secrets about this season’s costumes, below.

"Payton definitely has a more political look this season, now that he is running for Senator. We wanted to keep the aspirational element and pump up the typical politician looks. Now that we are in New York for season 2, we added more soft knits and warm colors from the wool suiting to the cashmere turtlenecks."

"Payton is often on the campaign trail, wearing strong coats and slim suiting — with chunky Prada brogues and classic but elevated Gucci shirting. We wanted Payton’s closet to still be rich and timeless, often wearing monochromatic looks like season 1, but in a more grown up elevated way."

"There are two looks in episode 6 that [most embody Payton's character]. One is a cashmere cream turtleneck sweater he wears under a grey wool double breasted suit. It is a very Payton look because it is soft, warm and sophisticated and shows that he is serious, without having to always wear a tie."

"Another look is in from that same episode. Payton wears a navy Gucci pinstripe suit to the Dede Standish HQ with his team — it has a beautiful & understated red “Gucci” lettered pinstripe. The tie is a simple slim burgundy that matches the suit stripe and his light blue striped shirt has a contrast white collar. He is also almost always wearing his signature chunky lace up brogues, a definite departure from more usual politician footwear."

"Astrid is always so fun to create looks for and Lucy Boynton has a very keen sense of style. Her character's style evolved to a more rock n’ roll New York downtown feel this season. We sought out more vintage, recycled and upcycled elements and paired them with flashy accessories like blue tights and patent handbags."

"Astrid still finds designer goods — she is seen wearing a monogrammed Louis Vuitton leather biker jacket with an '80s bubble skirt set over a neon pink tight turtleneck. Statement coats were also key for many of her looks now that she is a New Yorker and she wore this stunning red patent unlined Tibi coat on a day below 20-degrees, where we had to hide to hide a puffy coat underneath so she could stay warm. She also has a closet full of fabulous footwear and is still extremely accessorized, wearing oversized statement earrings often."

"Alice has a bit of a reinvention this year, seen as the “first lady” of Payton’s campaign, but with a strong sense of self identity and evolution. She has grown up from the pastel sweater set girl from her youth to a more serious woman who dresses with a mature confidence."

"Dede, always put together in well-tailored pieces, shows her more vulnerable side at home in a soft all white head to toe Proenza Schouler look. She then wears a pleated leather Gabriela Hearst midi skirt with knee high boots when she meets up with a fellow politician. Dede can appear formidable, but shows her strength through her realness."

The Politician's Approach To Suiting

"There is so much suiting on this show and we are constantly looking for ways to modernize the looks, while still seeming playful and aspirational. Bold color is super important and key for the aesthetic of this show. Each character has a unique color palette and we designed and created many of Bette’s skirt suits to keep her signature bold sassy style."

"For Payton, we pair his slim suiting with soft cashmere knits and chunky brogues to keep his character fashionable, but classic and timeless. Every character’s closet is so unique — McAfee wears a lot of suiting (almost every look) so we play with different cuts and shapes, wearing sky high platforms, loafers or ankle boots. We also love to layer, so that was a great way to diversify the look."

"It was such an incredible experience designing for both Judith [Light] and Bette [Midler]. One of my assistant designers, my sister Lily, and I met with Bette early in the prep process to discuss her character Hadassah's style and the shapes and colors she gravitates towards."

"Bette really knows what looks good on her and showed us her favorite closet pieces she has collected over the years. From there, we sourced fabrics and designed pieces that we couldn’t find in the stores. It was an easy decision to make a lot of her looks — we needed specific shapes for her petite size, and bold colors to complement her character’s sassy style. Bette loves color and Hadassah does too."

"Judith also really knows what she likes to wear and isn’t afraid to take risks. We knew her color palette would be more neutral with some pops of red and blue. She loves to wear black and white, more tailored pieces and that really aligned with Dede’s style. Dede isn’t afraid to push boundaries and Judith and I discussed that aspect often when coming up with her looks."

"And jewelry! Both Judith and Bette love statement pieces so we worked with high end jewelers like Verdura, borrowing the most amazing brooches, necklaces, and earrings throughout the season. We sourced vintage costume jewelry and even borrowed pieces from Bette’s personal collection and our own mother’s."

"Infinity had a huge reinvention this season now that she has escaped from her Grandmother’s firm grasp and she is free to dress how she desires. We wanted to keep her look whimsical, but a bit more mature. Now that she is on a mission to change the future of this world through climate change, we tried to source vintage, upcycled and from many sustainable brands. Her character is so full of life, much like season 1, and because this is a satire, we get to have a lot of fun with her aesthetic. She wears whatever she wants now, and we wanted that to be obvious through her adventurous style."

"Most of the characters have signature pieces that instantly feel like them. Alice is almost always carrying a small ladylike handbag, much like season 1. Most often, it is the Tory Burch petite Lee bag, which she had in many colors. James is almost always seen wearing a tie, many of them vintage — worn with his collection of tie bars. McAfee’s signature is most definitely her suits. Payton wears many soft turtlenecks under his suiting. Astrid has tights in every color and print. And Skye’s sneakers - she has a strong sneaker game."