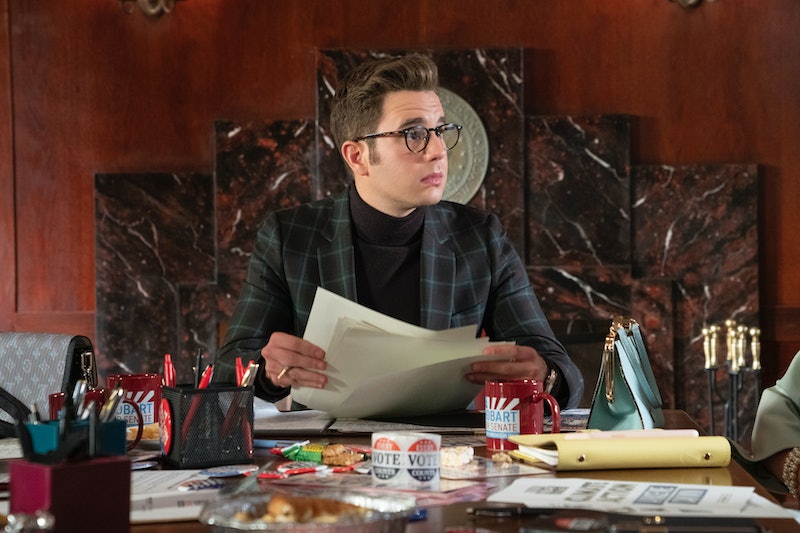 Not even a national health crisis can keep Payton Hobart from carrying out his political agenda. On Monday, May 18, Netflix announced that the official premiere date for The Politician Season 2 will be Friday, June 19 and will find Ben Platt's character facing the biggest political campaign of his career thus far. As the end of first season teased, Payton (Platt) decided to jump back into the diplomatic arena by running against longtime incumbent Dede Standish (Judith Light) for a seat in the New York State Senate. And while Dede's loyal and no-nonsense Chief of Staff, Hadassah Gold (Bette Midler) might think they have the win in the bag, Payton could prove to be much more formidable than either of them realize.

As per the official press release provided to Bustle, "Payton — who sees this as the next step on his path to the Presidency — must decide what kind of politician he ultimately wants to be in order to succeed, even if that means exposing secrets, lies, and a throuple." The "throuple" in question is, of course, between Dede, her husband, and their secret lover — a part of her life that has been kept secret from the world... until now.

“When I found out what it was going to be, I was like, ‘This is why Ryan [Murphy] is a genius,’” Light previously told Entertainment Tonight about her decision to join Season 2, which was filmed back in October. “Having scenes with Bette is just a dream. She’s amazing. Leave it to Ryan to come up with that!”

Along with revealing the premiere date, Netflix also unleashed a collection of images from the upcoming second season as a way to offer fans a first look of what's to come. Along with stunning images of both Light and Midler in all their power suit glory, another intriguing image is sure to catch your eye.

Gwyneth Paltrow, who plays Payton’s mother Georgina, is also featured making a statement on CNN, which could have something to do with the fact that she's expected to make "a momentous decision that threatens to upstage him and everything he's hoping to accomplish," as per the official description. Though, as for what could that big decision could be remains to be seen.

But as for whether or not Payton will prove successful in achieving his latest pursuit up the political ladder — you'll just have to wait until June 19 to find out.