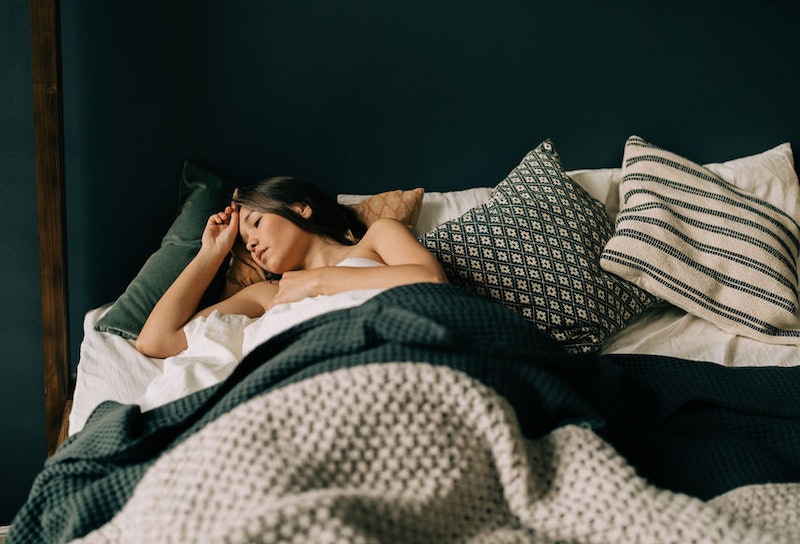 There are some days when you wake up on the right side of the bed ready to tackle your emails, go to the gym, and take on the world. But when you’re tired, it can feel like a borderline impossible task to leave your duvet. Well, a study from mattress reviewer The Sleep Judge has revealed the position you sleep in may have a significant influence on how much shut eye you get.

There are a few usual suspects that dictate how good my night’s sleep will be, the usual two being how many cups of coffee I have had after 5 p.m. and whether I am still scrolling through Instagram at midnight. But the Sleep Judge study revealed that a lot more goes into a peaceful night of zzz’s.

The study questioned 1,021 people about their sleeping habits. Participants ranged in age from 18 to 77, and 54.4 percent were female, 45.6 percent were male.

Questioned about what position they slept in, it was "back sleepers" who were polled as having the best night’s sleep. Many respondents reported sleeping on their side in the fetal position, as it is comfortable. However, a massive 40 percent reported sleeping poorly in this position. When it came to what mood the participants woke up in, "side sleepers" were found to be the grumpiest, along with those who slept on their tummy. Back sleepers were more likely to wake up feeling motivated. As a committed side sleeper, I may be beginning to see the error of my ways.

While it is all well and good working out the best way to sleep when you are on your own, it can throw a spanner in the works when you start sharing a bed with someone else. I, for one, hate sharing a bed. But what actual effect does it on a person's sleep patterns?

Well, couples who slept back to back reported getting the worst night sleep, with 37 percent saying their quality of sleep was poor. On the other hand, 72 percent of couples who slept in the distant spoon position (spooning but not close enough to be touching) reported having a good night sleep. And, interestingly, a whopping 99 percent of participants who said they slept in this position said they were satisfied with their relationship. This is compared to 85 percent of respondents who slept back to back.

There is nothing better than waking up in a good mood, and, as well as suggesting what positions are most conducive to a decent night's sleep, the Sleepy Judge study also looked at what happens when we wake up.

The study showed our quality of sleep can actually dictate what we are thinking about when wake up. Most participants who slept poorly said the first thing they thought about when they woke up was (unsurprisingly) sleep. On the other hand, people who slept well thought about work upon first waking up.

Sleepy Judge revealed that work was the first thing on the minds of more men (31 percent) than women (23 percent). And, of all the generations surveyed, millennial's were found to be most likely to wake up and think about work, with 30 percent claiming that was their first thought.

So how do you get yourself out of a funk if you have woken up in a really bad mood? We all have our own little coping mechanisms, be that downing a Pret espresso at your desk before anyone has the chance to talk to you or going for a brisk run before getting ready for work. The study found that 44 percent of men and 39 percent of women said they used music as a way to get out of a negative mood. Coffee was also a big favourite, with 43 percent of women and 34 percent of men saying they use caffeine to perk themselves up. Other things participants did to make themselves feel more positive were talking to their significant other, exercising, and playing with a pet.

So, if you find the quality of your sleep slipping, try changing things up a little, and hopefully you'll be ready to take on the day.