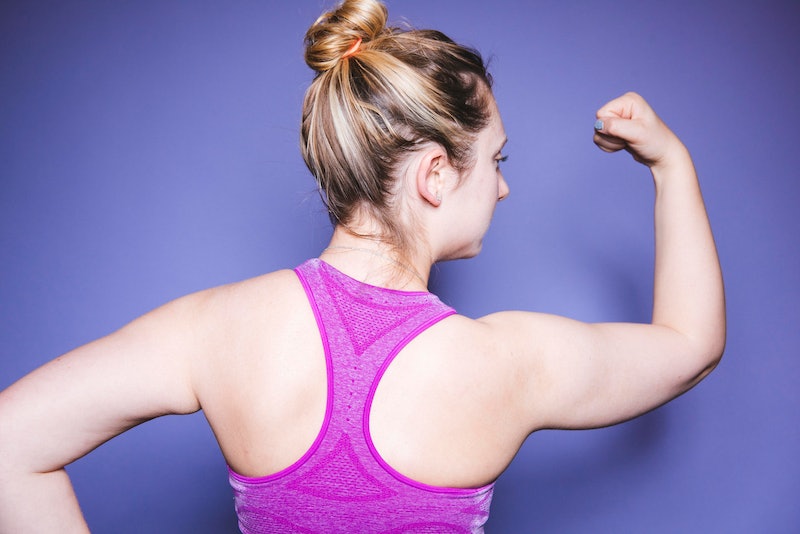 Scrolling through the flawless Instagram profiles of social media fitness stars can put a person’s self-esteem to the test — but these stars themselves are often conscious of the disconnect between how things appear on social media and how they actually are. That's why fitness Instagrammer Anna Victoria's recent post is going viral — it's a reminder that real life is, well, real life.

.The workout guru, who lives in Los Angeles, posted a relaxed no-makeup selfie with undone hair in response to an email she received from a 16-year-old fan. The girl wrote that seeing endless perfect photos had made her insecure about her own body, but of all of the fitness experts she followed, Anna Victoria was the only one that made her feel good about herself. “For me, that was huge. Not because I felt like I was the best fitness person to follow, but because I think it's indicative of what's going on in the fitness industry,” Anna Victoria tells Bustle in an email. “I don't think other trainers or fitness models aren't inspiring or motivating, they absolutely are, but there is a shift going on where people are asking for transparency and not as many are giving it.” Anna Victoria, who has consistently given her followers a dose of reality along with the enviable gym selfies, knew she had to speak up.

On Dec. 19, she posted the selfie and gave her reasoning behind the pic in a powerful caption. "The impact social media has on young girls and their self-esteem is an issue I feel very strongly about," Anna Victoria wrote. "And if me posting one casual, non-posing, non-done up photo can help a young girl (or man, or anyone of any age!) feel better about themselves, then I'm happy to put myself out there."

Her message to her fans and girls everywhere was both simple and necessary. "Love your body at every angle and don't ever be ashamed of being human, of struggling, or hey, even of loving the crap out of yourself! We need more girls who are wildly confident and loving every bit of themselves and shouting it from the rooftops," Anna Victoria wrote. "Show young girls it's not only okay but necessary to be confident, strong young women, "flaws" and all." Amen, sister.

In just 24 hours, her post racked up 500 comments and 20,000 likes, proving that social media can be a powerful tool for spreading positivity. What's more, this is certainly not the first time that Anna Victoria has shared a "real" picture on Instagram. In the past, the fitness star has been open about bloating, or the times when she has not projected her absolute best self (she's a real human, people!). “Body positivity plays a huge role in my life and in my Instagram. Loving yourself, no matter what part of your journey you're in, is more important than words can describe," Anna Victoria tells Bustle.

The Insta star was not always focussed on health and wellness. She battled health and digestive problems in her early 20s, and found the only way to ease her symptoms was through changing her lifestyle. Like so many young women, in 2012 she turned to Instagram to help her on her journey. “I decided to make an Instagram account where I would post new things I learned and things that motivated me in an effort to bombard myself with as much positive thinking and inspiration, possible,” Anna Victoria tells Bustle. “I felt a great deal of support from those also on their journey and I was able to connect with others struggling with the same things I was.”

Though she is passionate about showing all sides of the process, and encourages other fitness gurus to do the same, the response to her real photos isn't always positive. "I never know how the response will be to the more 'real' photos I share, and believe it or not, I do receive a good amount of negativity when I do share them, so I was surprised at the reaction," Anna Victoria explains to Bustle. "So many girls have started sharing their own #tummyrolls photos and that's the best thing that could happen in my opinion."

Anna Victoria's advice to those who want to feel better about themselves is to try not to focus on the surface end goals, such as a flat stomach. Instead, she advises to make health the priority and view whatever physical changes happen as the bonus. "My advice to young women for how to lead their healthiest life is first to know that they deserve to love themselves, just as they are. Then, taking the next step in self-love is to take care of their body and health," Anna Victoria tells Bustle.