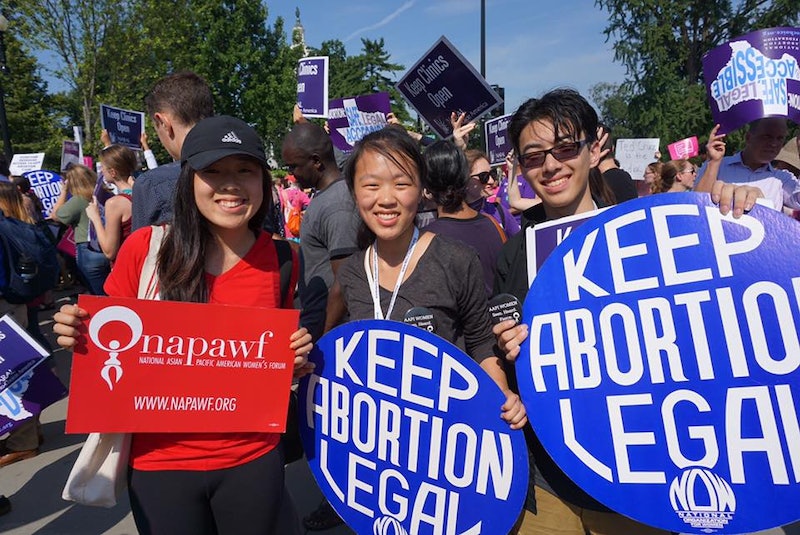 Ever since Donald Trump took office in January, nearly 2,000 bills have been introduced in the Congress. While it's impossible to keep track of each and every one of them, some can't afford to go unnoticed. Among them is a bill called HR 147, or the Prenatal Nondiscrimination Act, which could disproportionately affect Asian-Americanwomen by calling for the imposition of criminal penalties on people who "knowingly or unknowingly" conduct abortions based on "the sex, gender, color or race of the child, or the race of a parent."

Introduced by Arizona Rep. Trent Franks, HR 147 may sound like a demand rooted in good intentions but critics of the bill highlight the repercussions it carries for women of color, especially Asian-American women who suffer stereotyping based on race and sex-selective abortions.

This isn't the first time a concentrated effort from Republicans arrives to attack Asian-American women's autonomy. When South Dakota Rep. Don Haggar said the time he spent in Asia taught him that "the rest of the world does not value the lives of women as much as I value the lives of my daughters," proponents of banning "sex-selective abortions" used that as an opportunity to strengthen the stereotype that Asians seek sons over daughters.

The NAPAWF is dedicated to preventing such discrimination and addressing what could come down to a lack of knowledge in some cases. The organization created a detailed research toolkit called Replacing Myths With Facts: Sex Selective Abortion Laws In The United States that identifies six "inaccuracies" or myths about sex selective abortion bills. You can download it here for free.

The organization's report claims that efforts against "sex-selective abortions" are often initiated by the "legislative campaign of groups opposed to reproductive rights." From myths like India and China being the only two states with male-biased sex ratios to debunking the myth that banning sex-selective abortions are "effective," the paper attempts to educate readers about the potential consequences of bills like HR 147 that irreparably hurt and silence the very same women they purportedly want to protect.

And patients seeking help aren't the only ones vulnerable under this bill. Khan says HR 147 could ensnare multiple identities into its crosshairs. "It criminalizes the people who could provide abortion," she details. "It makes every person of color and Asian-American woman who are seeking abortion inherently suspect. Their reproductive decision-making is under scrutiny and interrogation."

Ultimately, Khan explains, the bill renders a woman of color's choice to an abortion "obsolete." But not all hope is lost. For change to be viable, Khan says there needs to be not only an in-depth discussion of how to thwart the bill legally, but also a "cultural shift" in the conversation on reproductive rights. "We need to have conversations with people about what these bills mean and push against the stereotypes," she says.

If you'd like to take action to stop bills like HR 147, the first step could be finding out if your representative is a co-sponsor of the Prenatal Nondiscrimination Act of 2017. If he or she supports the bill, make a phone call and explain why you oppose that position.

At the end of the day, Khan says that social awareness about the bill is most critical for building any kind of solidarity. Without a coherent and consistent discussion, there is no moving forward.