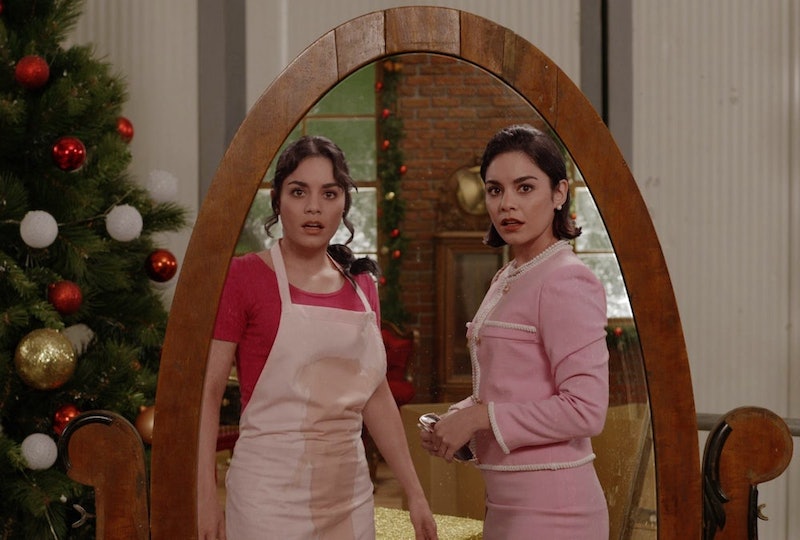 Netflix's The Princess Switch featured two Vanessa Hudgens in one movie. This year, its sequel will feature three. On Tuesday, Oct. 29, the streaming service announced that Princess Switch sequel is officially happening with a new lookalike in the mix. The Princess Switch: Switched Again, set to debut on Netflix in 2020, will follow Duchess Margaret (Hudgens) as she inherits the throne of the fictional country of Montenaro and experiences some relationship troubles with Kevin (Nick Sagar). From there, it’s up to her doppelganger Stacy (also Hudgens) “to save the day before a new lookalike, party girl Fiona (yet again, Hudgens), foils their plans,” as per the Hollywood Reporter.

The first Netflix holiday film debuted on the streaming service in November 2018 and followed Stacy, a Chicago baker who traveled to the fictional country of Belgravia for a baking competition. There, she runs into Margaret, a duchess who looks exactly like her. The two switch places and inevitably fall in love with each other’s partners. Director Mike Rohl and screenwriters Robin Bernheim and Megan Metzger will return to work on the sequel. Hudgens will executive produce.

Shortly after its premiere on Netflix last year, the Princess Switch garnered a cult following among fans. Social media users couldn’t get enough on the heels of A Christmas Prince's success. “#ThePrincessSwitch was so predictable, cheesy, with terrible acting... had such an obvious storyline.............,” one Twitter user wrote. “BUT I LOVED EVERY MINUTE IT.”

While a third doppelgänger could come as a surprise twist to some, Hudgens herself may have unwittingly willed the concept into existence. In an interview with Glamour in November 2018, the High School Musical alum touched on the possibility of a Princess Switch sequel and even shared a plot idea that has now mirrored reality. “I honestly don’t even know where [a sequel] would go, because we already got our happy endings,” Hudgens told the publication. “We’d have to create more conflict, or maybe there would [be] a third twin. Spruce things up a little bit.”

In the interview, Hudgens also expressed support for a possible sequel. “I’m going to leave that one up to the writers, but I know that I had so much fun doing it,” she said. “The characters are so sweet that I would definitely be on board.”

On the heels of the film's release, Sam Palladio, who played Prince Edward in the film, revealed to Bustle that the film was loosely based on Meghan, Duchess of Sussex and Prince Harry, Duke of Sussex. The two wed a few months prior to the film's release in May 2018. “Literally the day we arrived [on set] it was the royal wedding so it ... actually was a really good character research,” Palladio told Bustle in November 2018. “Our story is very much the Harry and Meghan story. Well, I guess without the double ‘Meghans,’ because that would be a bit weird.”

The Princess Switch: Switched Again will begin production in November in the U.K.

More like this
Here’s Everything Coming To & Leaving Netflix In August
By Jake Viswanath
What’s New On Netflix: 'Never Have I Ever' & 'Indian Matchmaking' Return
By Arya Roshanian
What’s New On Netflix: 'Bridget Jones’s Diary' & 'Monster-in-Law'
By Arya Roshanian
22 Movies On Netflix That Are Perfect For The Whole Family
By Bustle Editors
Get Even More From Bustle — Sign Up For The Newsletter