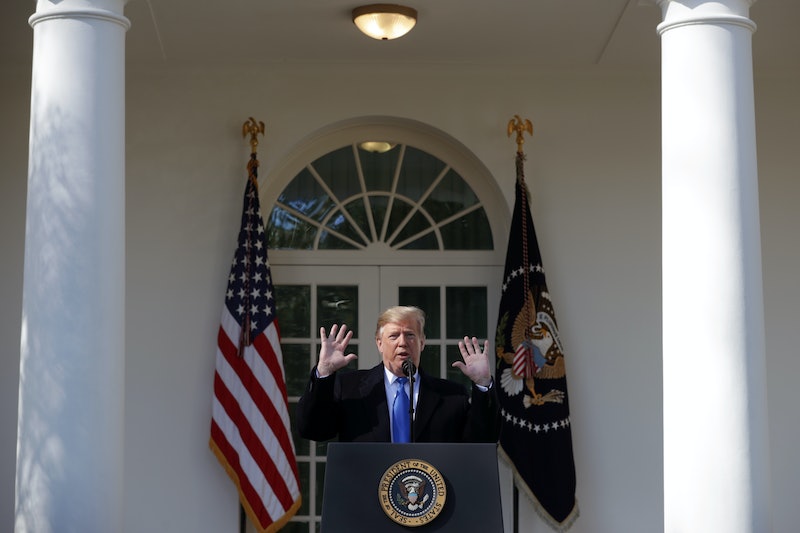 On Thursday, a group of Democratic senators introduced The Protecting Disaster Relief Funds Act — and it could leave Trump with less wall funding options. The bill, if passed, would bar the president from taking funds from "disaster relief appropriations" to construct a wall, according to a release from Elizabeth Warren's Senate office. 2020 presidential hopefuls Warren, Bernie Sanders, Kamala Harris, and Kirsten Gillibrand as well as Sens. Edward Markey, Richard Blumenthal, and Robert Menendez introduced the legislation.

The bill, if passed, would block Trump from using money the Department of Homeland Security, the Department of Housing and Urban Development, and the Army Corps of Engineers allocate toward disaster relief, according to The Hill. In a statement, Warren said the bill was an effort to protect "devastated communities" around the country that are still recovering from natural disasters, from hurricanes to wild fires. There is similar legislation in the House of Representatives, introduced by a Democratic Rep. Nydia M. Velázquez of New York.

On Friday, Trump declared a national emergency from the White House Rose Garden to secure funds to complete the wall on the southern border, according to The New York Times. White House acting chief of staff Mick Mulvaney told The Associated Press after Friday's announcement that money for the wall could come from numerous places. According to the Associated Press, the White House said it might use funds from the Treasury and Defense Departments — but not money reserved for disaster relief efforts.

Additionally, Republican Texas Sen. John Cornyn told The Associated Press on Thursday that the White House doesn't plan to use Hurricane Harvey funds to pay for the border wall. "We've been pretty clear we thought that would be a mistake," Cornyn told the wire service. "There's limited pots of money he can get into, but I'm pretty confident he won't get into disaster funds."

Still, people were initially worried that disaster relief funds could suffer if Trump began construction on the wall. On Jan. 10, NBC News' Courtney Kube and Julia Ainsley reported that the president was "briefed on a plan" to use nearly $14 billion of Army Corps of Engineers funding that had been set aside for hurricane-ravaged Puerto Rico. Bustle reached out to the White House for comment on the report. But as mentioned previously, the White House has suggested it's not considering tapping disaster relief funds.

Even so, Gillibrand said even the idea of using disaster relief funds to pay for a border wall "disturbed" her. And she's clearly not the only lawmaker making moves to safeguard the funds anyway. "This is a betrayal of communities that are already struggling to get back on their feet, and Congress must not allow the President to carry out this reckless plan," Gillibrand said in a statement. "I am proud to introduce this bill to protect these communities and ensure that President Trump cannot use disaster relief funds to pay for his wall, and I urge all of my colleagues to support this bill."