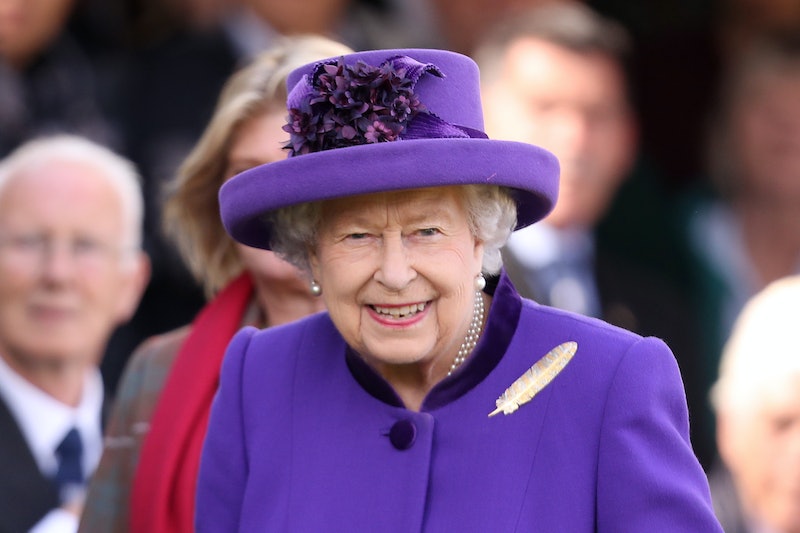 We all have our go-to treats at the end of a long day and, for lots of people, chocolate tops the list. Once again, the Queen has proved that although she's royalty, she's still just like us in many ways. Turns out her choice after-dinner snacks is one of them, as it appears that the the Queen is a big fan of chocolate and seriously, who can blame her?

In an interview with Hello! the Queen's former chef Darren McGrady spilled the beans on Her Majesty's favourite treats. He told the publication, "She is absolutely a chocoholic. Anything we put on the menu that had chocolate on, she would choose, especially chocolate perfection pie." But her Royal Highness will not settle for just any old chocolate, of course not. "She likes chocolate, but only dark chocolate, the darker the better. She’s not a big fan of milk or white chocolate," McGrady said.

According to The Express there's one chocolate treat the Queen loves best of all — Bendicks Bittermints. If you aren't familiar with the sweet, the Bendicks website describes them as "a unique combination of contrasting, premium ingredients. Intense mint fondant is harmonised with indulgent, dark, 95% cocoa solids chocolate." Sounds pretty delicious, right? If you want some chocolate fit for a queen you can get you hands on Bendicks Bittermints at Tesco. The Telegraph reports that "Bendicks' Royal patronage was officially recognised with the award of a Royal Warrant: “By Appointment to Her Majesty the Queen.” Since then the gold warrant has been displayed proudly on all of Bendicks distinctive packaging." Bendicks Bittermints are quite clearly the most majestic sweet treats on the market.

McGrady also shared some more information on the Queen's regal tastebuds, stating that despite her love for chocolate she is "not a foodie". Each week she would be presented with a red leather book containing menus and "she would put a line through the ones she didn't want. Sometimes she'd put a line through it all and put something different, like if she was having dinner with [one of her sons]." Ah, to be a royal.

If you're wondering what the Queen eats for the standard meal before any chocolate treats, McGrady said that while he worked there: "she loved game, things like Gaelic steak, fillet steak with a mushroom whisky sauce, especially if we did it with venison. For a first course she loved the Gleneagles pâté, which is smoked salmon, trout and mackerel."

McGrady also told CNN that the Queen occasionally pairs her dinner with a "gin and Dubonnet" cocktail which is her favourite drink. Wow, a woman after my own heart. She's also a fan of German sweet wine with her dinner, perhaps a nod to her German ancestry, but contrary to popular belief she doesn't have four glasses a day, just the one with her dinner. Personally, I'd be incredibly satisfied with any of these menus, so if there's an invite to the palace for dinner, I'm 100% available.

More like this
What We Know About Where Caroline Watt Is Now
By Catharina Cheung
The Sean Bean Intimacy Coordinator Controversy, Explained
By Sam Ramsden
Nicola Walker Warns Fans To Expect A "Bumpy Ride" In 'Annika' Season 2
By Maxine Harrison
Leona Lewis & Husband Dennis Jauch Welcomed Their First Child
By Darshita Goyal
Get The Very Best Of Bustle/UK