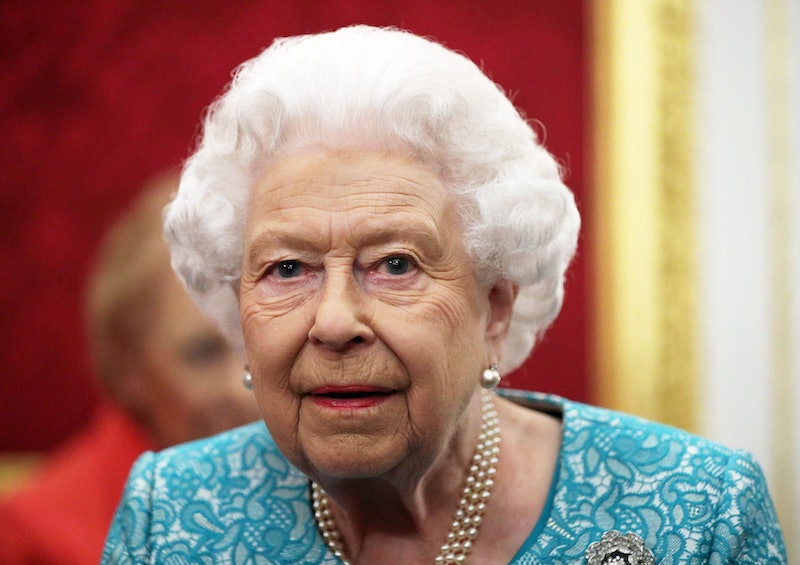 Cooking for royalty must be a decidedly stressful and precise operation. Not only does everything have to be up to scratch but the presentation must also be fit for an actual Queen. So needless to say, when a former servant revealed the Queen found a slug in her salad, everyone was royally shocked.

The incident is described by former royal servant Charles Oliver in his book Dinner At Buckingham Palace. And you guys, it's kind of a doozey.

I contacted a Buckingham Palace representative who declined to comment on the story.

According to the Express, Oliver claims in his book that the Queen once found a very unwelcome guest at the dinner table. And this one wasn't human. Oliver revealed that the footmen once found a torn-off corner of paper with a dead slug lying on top of it, after they were clearing away the Queen's dinner. If that's not a grim enough discovery, what was allegedly written beneath must have made their blood run cold. Oliver claims in his book that next to the slug the Queen wrote: "I found this in the salad—could you eat it?"

Seemingly, according to Oliver, there's a little feedback notebook that the Queen and Prince Phillip can fill in after every meal and it was from this book that the paper was torn.

I guess you'd assume such a notebook would be filled with page upon page of comments and feedback. However Oliver claims that despite her status, the Queen is in no way a fuss pot when it comes to dining matters. Seemingly she's more concerned about noting and remembering what her guests aren't that keen on. So as to avoid any dining disappointments in the future. He wrote:

"Mostly, the book remains blank, as the Queen is not fussy about food. However, when she has a guest to an informal lunch and they reveal definite likes and dislikes—such as an objection to fried potatoes or Brussels sprouts—the Queen will make a discreet note for future reference."

Although she's not to difficult to please, according to her daughter-in-law Camilla, Duchess of Cornwall, there's one ingredient the Queen absolutely cannot abide — garlic. So much so that nobody in the royal family is allowed to eat it. But you guys, it's for good reason. When asked on Masterchef Australia she said, "I hate to say this, but garlic. Garlic is a no-no." When the host asked if it was related to having to chat to so many people, she responded: "Yes, exactly. So you always have to lay off the garlic."

So if you've invited the Queen round for tea, best put the kybosh on any garlic bread plans and double check you've washed the rocket well.

More like this
Pret & Costa’s Coffee Is The Strongest On The High Street, According To Which?
By Sam Ramsden
Ben & Jerry’s New Sundae Flavours Are A Chocoholic’s Dream
By Sophie McEvoy
Rachel Nickell’s Son Wants The Police To Take Accountability Over Errors
By El Hunt
Everything To Know About The 'Daisy Jones & The Six' TV Series
By Maxine Harrison and Brad Witter
Get The Very Best Of Bustle/UK
Sign up for Bustle UK's twice-weekly newsletter, featuring the latest must-watch TV, moving personal stories, and expert advice on the hottest viral buys.