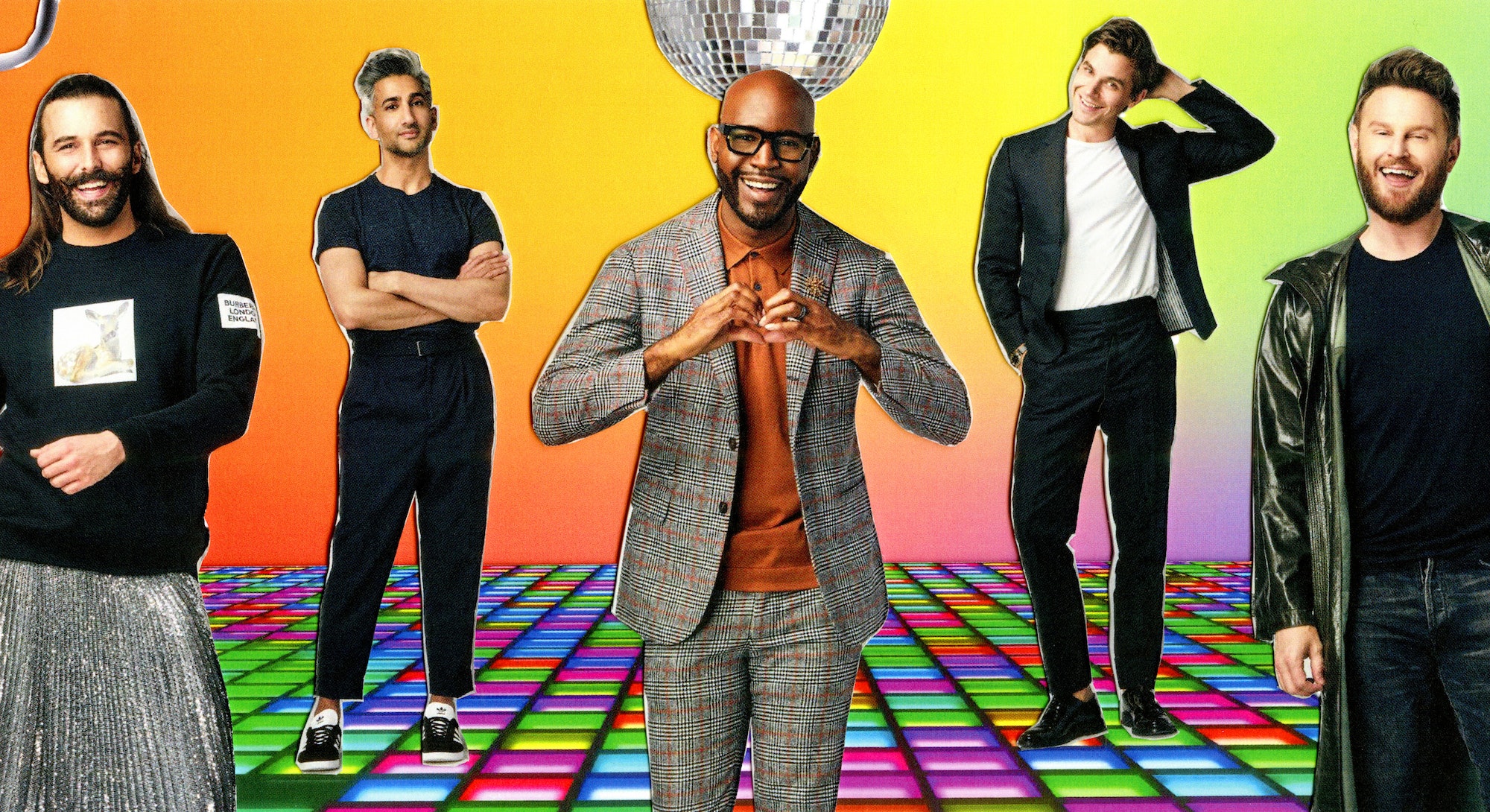 Over the course of two years, three seasons, and many filming locations, Queer Eye's Fab Five have visited many corners of the world in the name of helping the show's heroes live their best lives. The series has become beloved in its short time on Netflix, thanks to the heartwarming on-screen journeys in the show's emotional episodes and the iconic personalities of the gurus: Karamo Brown, the culture expert; Antoni Porowski, the food and wine expert; Tan France, the fashion expert; Jonathan Van Ness, the grooming expert; and Bobby Berk, the design expert.

While the show focuses on the evolution of the episodic heroes, the hosts have had their own impressive journeys to reach this point in their lives. In honor of Pride Month, we asked the Queer Eye guys to tell us about the people in their lives who helped shape their own identities and played pivotal roles in guiding them to become the celebrated icons they are today.

"I was in third or fourth grade, living in Houston, Texas. I was living in a predominantly white neighborhood. By this time, I had started to identify as gay to myself.

There were a lot of messages that were coming to me, that told me because my parents were immigrants, because I self-identified as gay and I wouldn’t tell anyone, that I was never going to achieve anything.

I would often leave school feeling defeated, even though I had tried and tried and given my all and had good grades. I still felt like I was less than. There was a lady at the 7-Eleven where I used to go every day after school. She told me, “You’re going to be great someday. You’re amazing.” I’ll never forget it. She said it to me every single day. She didn’t know me, she didn’t know my family, but just that little bit of encouragement from a complete stranger made me believe I could do greatness.

In the ninth grade, I moved to Parkland, Florida, and I attended Majorie Stoneman Douglas, where the shootings were. When I got there, I felt lost, because here I am again, in another all-white environment. Now I’m fully identifying as gay to the world. I don’t have any friends, because my friends are back in Texas. I just felt alone and lost.

There was a teacher by the name of Ms. Silva, who was my geometry teacher, who used to encourage me every single day and told me, “If you stay on the path and use all of your identities to connect with people, to show people how special you are, then you’re going to make it and be something great."

"A few years before Queer Eye, I was a struggling actor in New York. I was auditioning, working for Ted Allen, and working as a manager in a sushi restaurant. I knew what I wanted to do, but I was at a point of great frustration, because I wasn’t doing what I felt like I was meant to do.

A dear friend of mine and mentor, his name is Klaus Biesenbach, he used to run MoMA in New York... we met at a poetry reading that Patti Smith did at MoMA, and became fast friends. He told me during my audition process for Queer Eye that the one thing you have to do is stay cool — stay relaxed, don’t have too much coffee, drink water for every other coffee you think you want to have, and just stay cool, calm, and collected.

He used to joke that what he loved about our friendship was that I was his one non-famous friend. And he was with me for this process of booking Queer Eye and seeing my life change so drastically. Klaus helps remind me of all the things that are really important. He continuously reminds me to just stay cool, to stay present, and to remember to be myself."

"It was my first relationship, my ex-boyfriend — he was the first person that really gave me an opportunity to explore my queerness and allowed me to be exactly who I am.

He really encouraged me to try whatever I thought was appropriate for me and not be stifled by anyone, within reason. He wasn’t encouraging me to be crazy, but if you want to go out and go to a club, go to a club. If you want to try alcohol, try alcohol. It’s all these things that you were so scared of up until this point that you don’t have to be scared of; just learn how to do them responsibly.

Looking back at that relationship, I was taught so much. And the most important thing I was allowed to do was just be whatever version of myself I wanted to be and there was no shame in that. I’m a version of myself that I’m very proud of."

"The one person who really sticks out in my mind, in particular, is Erin Gibson, who is the director of Gay of Thrones. She has just been a longtime friend of mine and I met her when I was an assistant at Sally Hershberger.

I was living in West Hollywood. I was 23. I had just moved to Los Angeles. It was August of 2009. I really just wanted to be a self-sufficient adult, raise my cat, and didn't want to ever need to borrow money from my parents again. I started doing Erin's hair color on the low, because I was a stylist assistant and I wasn’t supposed to be doing color for her since she was my boss’ haircutting client.

She created [Gay of Thrones], and kind of just let me come along for the ride. I learned how to produce and create — she's just totally changed my life."

"I was 21 or 22. I was living in New York. I was working at Portico, a furniture store in New York, with really no direction at all in my life. That’s where I was — super young and stupid.

And then I met my husband, Dewey [Do]. There was definitely a spark. Did I know this was going to be the person I was supposed to spend the rest of my life with? No, that’s not what I was looking for. But lo and behold, that’s what I found. The first few years, I think he barely said like three words. He was very shy; he was in med school. I brought him out of his shell and he helped me calm down a little bit.

As told to Bustle's Associate Entertainment Editor Mallory Carra. Responses have been lightly edited and condensed for clarity.

Grooming for Bobby Berk: Paige Davenport for Exclusive Artists using Make Up For Ever and Oribe Haircare