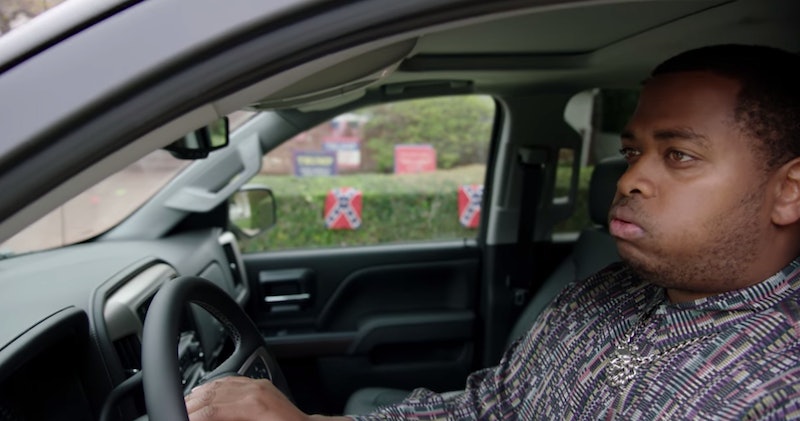 Spoilers ahead for Dear White People Volume 3, Episode 3. Parodying everything from Scandal and Empire, to Love & Hip-Hop and The Handmaid's Tale, Dear White People has been expertly skewering TV shows since its premiere in 2017. While the recurring show-within-a-show this season is a Tyler Perry-like actor, Jerry Skyler, in Mista Griggins, there's also a Queer Eye parody on Dear White People called U.S. of Gay in Episode 3. This faux Netflix series emphasizes just how far they'll go to promote tolerance — even makeover a racist Donald Trump supporter in the name of unity and entertainment. But it's not all that funny.

Of course, there's a clear through-line between each of the five U.S. of Gay personalities and Netflix's Fab Five. "I love the passion I see here," the Bobby character says enthusiastically, looking around at the Trump signs and Confederate flags littered all over their subject's lawn. "But maybe give it that like, sophisticated zhuzh so that more people feel welcome."

Their subject, a burly man with an American flag handkerchief on his head, responds, "So can we make it so that only some people feel more welcome?" He's clearly referring to the Karamo of the group — the only black man in the Fab Five, who looks like he'd rather be anywhere else but there.

This parody occurs on Dear White People when Lionel (DeRon Horton) goes to the House of No Pi with D'Unte (Griffin Matthews), where U.S. of Gay is playing on the TV. When the Tan character pulls a literal KKK robe out of their hero's closet, he reacts by saying, "Hunty! It's after Labor Day! What are you doing with all this white?! Disappointed." Meanwhile, the Karamo equivalent is out in the SUV, nervously pumping the horn, ready to make his getaway. (It should be noted that France is also a person of color, so it's unclear why he's not treated as such in the parody.)

Whatever the case, it's clearly a shocking scene of television for the Dear White People characters — all except Lionel, who leaves the room to make a call. When D'Unte finds him, he exclaims, "There are homosexuals on TV giving makeovers to Trump supporters! Why are you on the phone?!"

This biting spoof is likely referring to Queer Eye Season 1, Episode 3, which many fans had an averse reaction to when it aired in 2018. The episode's subject was a former Marine, current cop, and NASCAR enthusiast named Cory. Unbeknownst to the show personalities, Netflix had the subject's nominator — also a white cop — pull over the Fab Five while Karamo Brown was driving. The officer ordered Brown, who is black, to get out of the vehicle. The scene was incredibly tense before the policeman revealed that he was Cory's nominator. Although they all started laughing, Tan France (who is British-Pakistani) yelled, "You can't do that to brown people!"

It was such a genuinely terrifying moment that France didn't want to continue filming the show after that scene, according to a 2018 interview he did with Refinery29's Strong Opinions Loosely Held. "Afterwards, we were fuming, saying, 'This can never happen again. This wasn't O.K. You don't know what it feels like to be a person of color and get pulled over,'" he recalled. "Because we didn't want to film the next day, we're like, 'We're done, that's it.'"

"When Henry pulled us over, I immediately started freaking out," Brown later told Cory. "I really thought this is gonna be that incident where I was gonna get dragged out of the car." He went on to share that his son didn't want to get his driver's license because he was scared of police brutality. Indeed, according to mappingviolence.org, Black people are three times more likely to be killed by police than white people, so it's no wonder he was nervous.

Later in the episode, the Fab Five discovered that Cory owned a MAGA hat, which Brown put on. The episode's subject was clearly uncomfortable, saying, "We're all gonna make America great again." Brown broke the tension by commenting, "I don't think a Black person has ever worn this hat," before he remembered Ben Carson and Omarosa.

Later in the episode, Cory and Brown had a conversation about Black Lives Matter and police brutality where they each shared their experiences as a black man and a police officer. "We're both dealing with the same pain on two different ends, but none of us are acknowledging it," Brown said. Cory offered in response, "If we could sit down and have a conversation like me and you just did, things would be a lot better in society."

At the time, Karamo's conversation with Cory was mostly praised by critics, but it's clear that the Dear White People (a fellow Netflix show) found it problematic. When there's a group of people who are racist and don't believe in a person's humanity, is it really necessary for queer people of color to offer an olive branch by means of a conversation? Dear White People says no.

In that sense, the U.S. of Gay parody makes an important point. But regardless of how this Queer Eye satire lands with Dear White People audiences, it will certainly spark conversation on the lengths to which people should go in the name of tolerance.

More like this
What’s New On Netflix: Ana De Armas’ 'Blonde' & A Nick Kroll Special
By Arya Roshanian
Everything To Know About 'Bling Empire' Season 4
By Gretchen Smail
Andrew Gray Returned To 'Bling Empire' In Season 3 To Make Amends
By Brad Witter
Devon Diep From 'Bling Empire' Wrote A Song About Her “Second Chance At Love”
By Grace Wehniainen
Get Even More From Bustle — Sign Up For The Newsletter