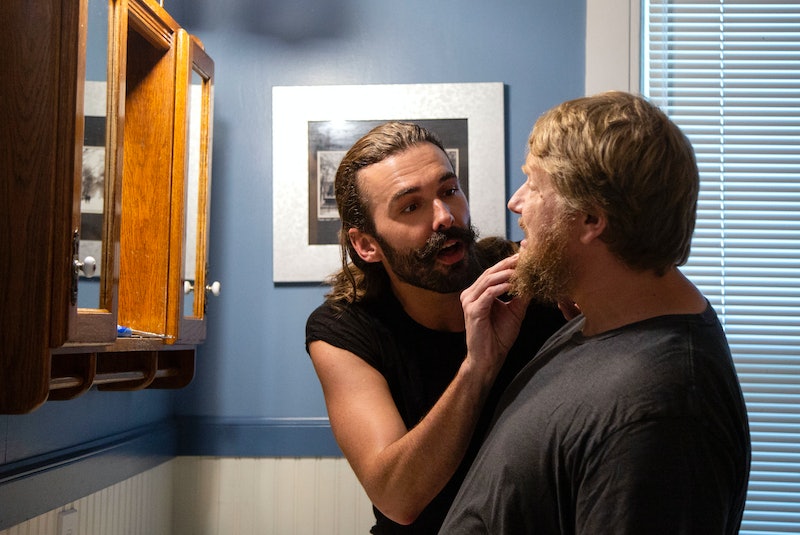 Queer Eye? More like Tear Eye — get it? Because it will make you weep. Regardless, there’s no time for good puns, only good feelings, because a new Queer Eye trailer introduced the Season 3 “heroes" who are getting life makeovers, and their stories are more heart-wrenching than ever. Needless to say, it's going to be an exciting and emotional third season of Queer Eye when it debuts on Netflix Friday, March 15.

Netflix put out the one-minute “Meet the Heroes” teaser on Wednesday, March 6, with a short feature on each of the nine people getting makeovers this season, along with their episode title to get fans ready for the new episodes. As the official YouTube description for the teaser says, "all of their stories are incredibly special and inspirational." Are they ever. The Fab 5 — Bobby Berk, Karamo Brown, Tan France, Antoni Porowski, and Jonathan Van Ness — seem to have found the most inspirational people in Kansas City, Mo., where the new season was filmed.

Among the heroes of Season 3, there are a few "firsts," including the Fab 5's first gay woman, as France excitedly exclaims in the back of the car in the clip. Jess Guilbeaux, 23, whose episode is called "Black Girl Magic," was the star of the first Season 3 trailer, which was released on Monday, March 4. And, as reported by Entertainment Weekly, she is the aforementioned first lesbian, who is trying to embrace her identity as a strong, black woman. According to EW, Guilbeaux's episode will feature the Fab 5 helping her connect with her biological sister.

Season 3 will also the first duo to be featured on Queer Eye. Sisters Mary and Deborah Jones, 58 and 61, respectively, own Jones Bar-B-Q, and the Fab 5 are going to help them build their business. As they say in their introduction, "Most pitmasters are men... but we can get right in there with them." In fact, the Jones sisters are two of the only women pitmasters in all of Kansas City, and their BBQ joint is sure to become even more legendary after their appearance on Queer Eye.

The fourth woman of the season will be Jody Castellucci, whose episode is called "From Hunter to Huntee." The 49-year old is a prison guard and hunter who wants to embrace a more feminine style without giving up her tough side.

And, yes, the Fab 5 will still make over men as well. This upcoming season, they will take on Joey Greene, the "Lost Boy," who is a 47-year old outdoorsman who doesn't want to grow up; Robert Hitchcock, 34, who needs some confidence before his wedding; Rob Elrod, a 42-year old single dad raising his kids after losing his wife to cancer; Thomas Diggs, a reclusive 21-year old gamer; and Tony Blanco, who is 29 and about to be a dad. Clearly, there's something to make everyone cry with all these heroes' stories.

Aside from all these endearing new heroes, there might just be an "earth-shattering" celebrity cameo, as Van Ness told Entertainment Tonight back in August, and Porowski said, "It's going to be such a good season." Things really do just keep getting better!