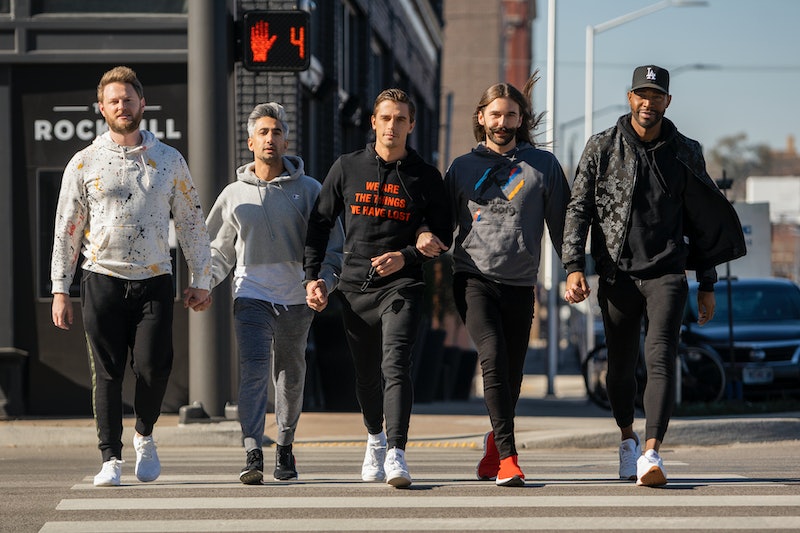 Even just one week without the Queer Eye Fab Five in our lives is too much to bare. Thankfully, you don’t have to wait much longer for Antoni Porowski, Bobby Berk, Tan France, Karamo Brown, and Jonathan Van Ness to return to your screens. The Queer Eye season 4 trailer is here, and you may already need some tissues before the new episodes premiere on July 19.

The Fab Five returned to Kansas City for round four of the beloved show, transforming even more people who haven’t reached their full potential into hometown heroes in their own right. And one hero teased in the trailer holds a very special place in Jonathan's heart. The experts will visit Quincy High School, where Jonathan graduated from, and give his former orchestra teacher Kathi Dooley a makeover.

The trailer teases the milestone episode, showing Jonathan in his old stomping ground. “This is Jonathan Van Ness, formerly of Quincy Senior High School, wishing you a gorgeous day,” he announced in one scene over the intercom, confusing a lot of students, who then start freaking out about the Fab Five's presence, as one does.

From the looks of it, this episode in particular is guaranteed to be a tearjerker. “She’s so dedicated that she puts herself on the back burner,” one woman said about Dooley. And in a moment that’s sure to break the hearts of every viewer, Van Ness tearily tells his former teacher, “You have literally saved people’s lives, mine included.” Someone pass the ice cream and tissues because I'm already sobbing.

Back in September 2018, Dooley previously told the Quincy Herald-Whig that she was “kind of overwhelmed” but thrilled to be made over by the Fab Five and reunited with her former pupil. “It will be great to have him home again,” she said. “It's awesome to see one of your students get to live out his dreams and work with those incredible people.”

Even the superintendent of the school district, Roy Webb, was excited about their special guests, and revealed a surprising childhood anecdote about the hair guru: his classmates and teachers used to call him Jack! “The show's fun, and it's going to be fun for the entire community, for anybody who knows Kathi and knows our School District,” Webb said. “It's going to be great recognition of Kathi's service to this community and great to have Jonathan — most people around here know him as Jack — back. He thought very fondly of Kathi and everything she did for him while he was in school.”

Other heroes this season include a woman who focuses so much on others that her own routine is a little outdated. “She’s been wearing the same make-up and hairstyle since the ‘90s," Brown remarked in the trailer. But since the '90s are back, perhaps she's just on trend? We'll leave that call to the experts.

Also teased in the trailer is a hero who has never had a conversation with a gay person in his life. Yes, you read that right. Now, he'll be faced with five fabulous gay men at once. If that doesn't sound like an tear-jerker of an episode, what does?