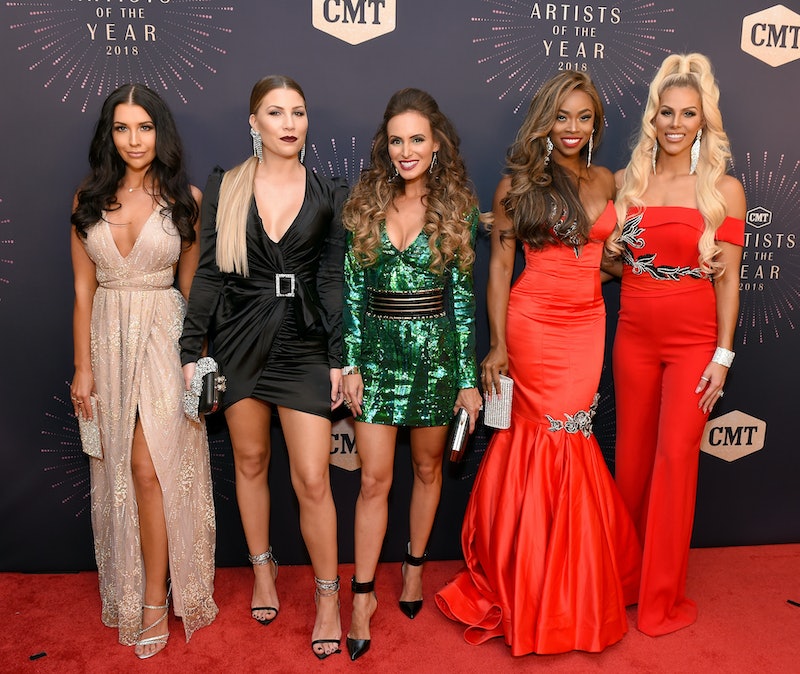 Start your engines, because a NASCAR series is coming to television. Premiering Thursday, Jan. 3 on CMT, Racing Wives follows the extravagant lifestyles of race car drivers and their spouses in Charlotte, North Carolina. It's like if the Real Housewives franchise married Southern Charm — with a bit of NASCAR thrown in, of course. But to watch drivers do their thing, interested parties just have to turn on ESPN — the Racing Wives cast, on the other hand, is all about those drivers' better halves, a Monster Model, and even a female driver. And it looks like these women are revving to make their debut on-screen.

As a bit of background, Charlotte is home to both the NASCAR Hall of Fame and the Charlotte Motor Speedway. And since the banking town is also such a huge racing hub, many drivers and their spouses have naturally made their homes there — more specifically, in Lake Norman, which lies just north of the city. Their lifestyles include sprawling mansions, extravagant parties, expensive cars, and — if the trailer is any indication — lots of drama (because why make a reality show without it?). So let's get to know who will be throwing the (hopefully metaphorical) punches, shall we?

Samantha appears to be the Queen Bee, and is married to driver Kyle Busch. "Being a wife of a driver is awesome," she says in the trailer. "But at the end of the day, I'm giving my husband a kiss and sending him in a race car that's going 200 miles an hour, and you don't know what's going to happen." According to an interview she did with People, Samantha is a huge IVF advocate; that's how she and Kyle conceived their first child, Brexton. However, while pregnant with their second, the mom-to-be suffered a miscarriage in November 2018. "We had wanted to be transparent in our IVF journey, but it truly never crossed our mind that it wouldn’t work the second time around," Samantha told People.

Yes, there are two Busches in the NASCAR scene, and their names both start with 'K.' Kyle's older brother, Kurt, is married to Ashley. According to her Instagram, Ashley is a polo player and a brand ambassador for U.S. Polo Assn. As a result, her Instagram is filled with glamorous photos of her — some with horses, others at the tracks with her husband. When asked what she liked most and the least about the race track in an Instagram AMA, Ashley answered, "Most — the pure energy at the track is unbelievable, it never gets old. OH and winning, of course! Least — when Kurt wrecks."

Mariel is a Monster Model, which, per the Racing Wives trailer, is essentially a NASCAR cheerleader. According to her bio on the Monster Energy site, Mariel's originally from Memphis and double-majored in public relations and business communications, as well as minored in ballet. What's more, she and former Monster Model Whitney Dillon run TheBFFBlog, where they write about their lives, beauty, style, and living, among other topics.

However, it seems like there's some tension between the Monster Models and the drivers' spouses. "I know for a fact that some of the wives look at us as the women out to steal their men," Mariel says in the show's trailer. The Monster Model is engaged to Paul Swan, who is a tire carrier for Richard Childress Racing, according to his Instagram.

Whitney is a former Monster Model who married driver Austin Dillon in 2017, according to TheBFFBlog. "I kind of opened the door for drivers to marry Monster Models," Whitney says in the Racing Wives trailer. As for her background, Whitney's originally from Soddy Daisy, Tennessee, according to her BFFBlog bio. She attended the University of Tennessee at Chattanooga, where she majored in communications and minored in marketing. She was also a cheerleader at UTC, later cheering for the Tennessee Titans, which is how she and Mariel met, per TheBFFBlog's Instagram. According to the Charlotte Observer, Austin and Mariel's fiancé, Paul, are also best friends, and were roommates before Austin and Whitney got married.

Amber isn't a racing wife but rather a driver herself. According to the Charlotte Observer, the 26-year-old is from Winnipeg, Manitoba, where several members of her family were sprint car racers. "My mom always really wanted to race, but since she was a female, her dad didn’t let her. The males got to race," Balcaen told the publication. "And my mom said, 'You can't do to Amber what my dad did to me. If she wants to race, you need to let her race.'" Flash forward to present day, where she's a one-woman team doing her own social media and PR, according to the article. "When you line me up beside 20 other drivers, you’re gonna notice me 'cause I’m the one with long hair and lipstick on," she said.

It remains to be seen what the dynamics of these five women will be, but Racing Wives promises to be an exciting look at the NASCAR social scene and the women within it.

More like this
Clayton & Susie Broke Up, Citing "A Significant Amount Of Pain" After 'The Bachelor'
By Jordyn Tilchen
‘The Ultimatum: Queer Love’ Is Officially On The Way
By Radhika Menon and Kadin Burnett
Kendall Jenner Thinks Tristan Thompson "Wanted To Trap" Khloé With Another Baby
By Jake Viswanath
Twitter Is Freaking Out Over Rihanna’s 2023 Super Bowl Halftime Show Announcement
By Stephanie Topacio Long
Get Even More From Bustle — Sign Up For The Newsletter