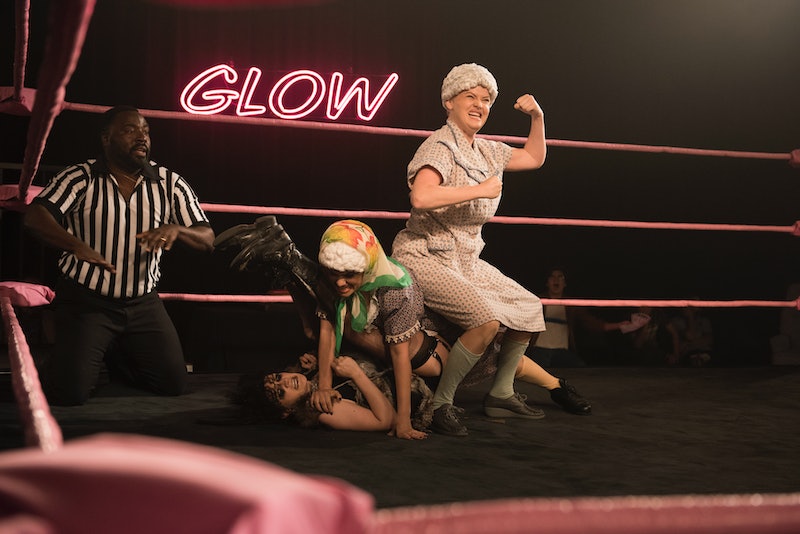 The second season of GLOW shows the Gorgeous Ladies of Wrestling ascending from an underground live show to cult television success. The GLOW series takes inspiration from the real Gorgeous Ladies Of Wrestling TV show, and like any great '80s programming, it had an iconic intro that gets recreated as the Netflix show dramatizes the process of making the television show that defined the wrestling organization. The makers of GLOW clearly had fun creating their own version of the show-within-a-show's opening, but it'd be hard to top the aesthetic of the original Gorgeous Ladies Of Wrestling intro sequence, which may be the single most '80s thing ever created.

Episodes of Gorgeous Ladies Of Wrestling all seemed to begin with a skit introducing the show, before cutting to a shot the GLOW cast. Starting with a close-up of a neon sign displaying the name of the program, the camera slowly pans out to reveal the massive cast of the show dancing to an unmistakably '80s rap beat. And yes, I mean it when I say slow pan out: The intro features 22 seconds of the GLOW wrestlers dancing and making direct eye contact with the camera before anyone begins rapping. That's right, if you thought the Gorgeous Ladies Of Wrestling intro didn't feature rapping, then you are sorely mistaken.

At the time that the Gorgeous Ladies Of Wrestling premiered, Rapping was a relatively new art form and everyone was hopping onboard. Having the wrestlers of GLOW rap solved an easy problem of not needing to ensure that everyone had musical talent to perform a theme song, but still allowed the wrestlers to be front-and-center at the beginning of every episode. While the characters themselves were often combative, the theme song does manage to offer a fun, inviting message for viewers:

We're The Gorgeous Ladies Of Wrestling

We're all champions in the ring

We come from a world where there is no pity

Slam! Bam! It's a wrestling jam!

Come on, Ladies! Give us a hand!

It's a big bad battle in the ring

We're gonna have fun and do our own thing!

No matter how violent things got in the ring, the theme song serves as a reminder that every wrestler is a champion when they're in the ring, and that all anyone is expected to do is "have fun" and "do [their] own thing!" It seems that the intro of GLOW changes a little bit for each episode; as the wrestlers rap, images of the specific wrestlers who will be competing in that specific episode float by.

The rapping GLOW intros are a great deal of fun, but for a more conventional opening sequence, fans should look to the intro for the show's 100th episode. The 100th episode promises a celebration of some of GLOW's best moments, as images of past GLOW matches fly by complete with some very '80s graphics.

The various intros of Gorgeous Ladies of Wrestling exemplify part of what makes GLOW such a compelling show — it's a look into the very particular aesthetic of '80s entertainment. As GLOW explores how this wrestling league makes the jump from live entertainment to television, it gives viewers a good feel for how it ascended from drab beginnings — a wrestling ring in a warehouse — to a neon pink-tinged spectacle. The original GLOW intro is extremely indicative of its time, it but also proves that the show's mission from the very beginning was to create a sense of fun, even if the behind-the-scenes reality wasn't always as enjoyable as the onscreen antics.