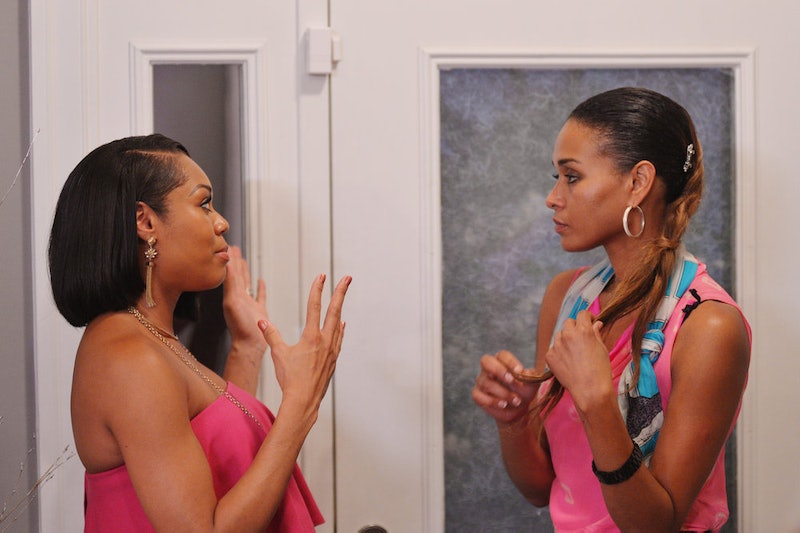 Our favorite ladies of Potomac are back for a fourth round of shade, scandal, and sisterhood. The Real Housewives of Potomac season 4 trailer arrived Monday, March 18, and it looks like the women are dealing with some life-changing events, including a frantic wedding, a turbulent pregnancy, sexual assault accusations, and the return of an old friend.

Every Housewife from last season, Gizelle Bryant, Karen Huger, Robyn Dixon, Ashley Darby, Monique Samuels, and Candiace Dillard Bassett, have returned for more drama. This time around, they’re joined by Season 1 Potomac housewife Katie Rost, who is making her return as a "Friend of the Housewives." And it looks like she may be stirring up some more trouble among the ladies.

“Katie Rost has more personalities than Karen has wigs,” Ashley quips in the trailer, which shows clips of the O.G. Housewife in a bustier and toasting friendship with Bryant before cutting to a potentially dramatic scene in a limo. “I’m just silently judging everybody,” Katie remarks. Who knows how far this shade can go?

But Katie isn’t the only name on everyone’s lips this season. Based on the trailer, the sexual assault allegations against Ashley’s husband Michael Darby seem to be a driving focus this season, and everyone has an opinion about it.

In September 2018, Darby was charged with felony assault and misdemeanor improper sexual conduct after he allegedly grabbed and groped a Bravo cameraman while filming an episode of the show, as reported by People. The charges against Darby were dropped in October 2018, and both Ashley and Michael deny that the alleged incident took place, but not all of the Housewives seem to believe them. “Michael likes big butts, I cannot lie,” Gizelle says during an interview clip in the teaser, while Candiace makes her sentiments known in public, resulting in one of the trailer’s big blowout fights. “You lying,” Candiace says while holding a knife in Ashley’s direction. “You putting out b*llsh*t!”

In the teaser, it looks like the couple is also facing criticism about trying to have a baby after suffering a miscarriage, with the ladies worried that it might not be the right decision. Spoiler alert — their input didn’t change their plans. The couple announced in February that they are expecting their first child together, and they’re not the only ones dealing with pregnancy woes this season.

Viewers will see Monique's journey as she prepares to give birth to her third child. “Everyone has to be nice to the pregnant woman,” Samuels says in the trailer. But, she might need to lower her expectation, because the teaser then cut to her longtime foe Gizelle exclaiming “F*ck Monique." Meanwhile, Monique also seems to make a new enemy in (former?) friend Candiace, who she threatens to drag, "pregnancy and all."

The trailer also shows Candiace going through some major stress herself while planning her wedding to now-husband Chris Bassett, with her mom Dorothy throwing some troubles her way. “My wedding is my wedding," she yells at her mother in the clip. "It’s mine!”

Elsewhere in the trailer, Robyn seems to be on the rebound with her former husband Juan (warning: the trailer gets pretty TMI), but her friends still remain frustrated with the couple's uncertain status, including bestie Gizelle, who is about to launch her first book. The Real Housewives of Potomac Season 4 premieres May 5 on Bravo, and it looks to be yet another fiery and shady season that we cannot miss.