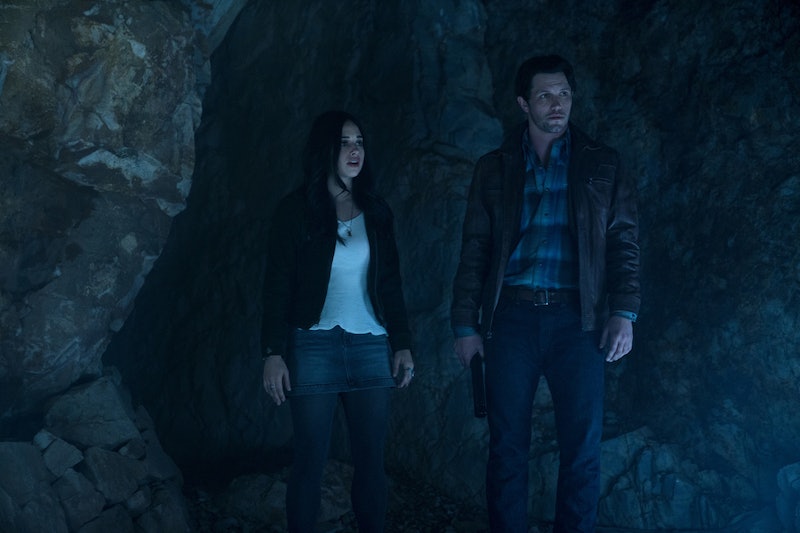 If you know one thing about Roswell, it's that it's about aliens. But what you may not know is that the real town of Roswell, New Mexico is just as widely known for its extraterrestrial history. And with the premiere of the show's reboot, Roswell, New Mexico, just around the corner, it feels like an apt time to read up.

According to the History channel, it all started in 1947, when a man discovered some strange debris in his sheep pasture outside of Roswell. Officials from the local Air Force base insisted it was a crashed weather balloon, and 50 years later, issued a report linking the incident to a top-secret project called Project Mogul — which, per Encyclopedia Brittanica, used high-altitude balloons as part of an attempt to detect Soviet nuclear bomb tests.

Nonetheless, many people believed the debris were remnants of a UFO, and various conspiracy theorists have since tried to prove it was an alien crash site covered up by the U.S. government. Also per Encyclopedia Brittanica, Charles Berlitz and William L. Moore published The Roswell Incident, a widely disputed book supporting this cover-up theory, in 1980; in 1984, documents surfaced that were alleged to be classified memos from President Harry S. Truman about the Roswell incident (they were later determined to be fake); and in 1995, a short show film purporting to show an "alien autopsy" from the incident was released, though its director later confirmed it was a hoax.

At a New York Comic-Con roundtable interview in October attended by Bustle, the Roswell, New Mexico producers talked about shooting on location, and what makes the area so evocative for this kind of story — even beyond all the alien rumors.

"Coming from The Originals," said executive producer Chris Hollier, "I joke that that show is 'nighttime and bourbon,' and our show is 'daytime and tequila.' And the sky is phenomenal. We're telling a story about aliens, and it just naturally lends ourself to look up... but also just sort of like moving around all of New Mexico, there's a spiritual quality to it. There's a lot of Native American influences and art everywhere. There's drawings of aliens everywhere, just naturally like driving around that area. So it lends itself in a huge way to telling that story."

Just like the fictional world of Roswell, New Mexico, the real town has become an extraterrestrial-themed tourist trap of sorts. "There's an electricity in the air there," added showrunner Carina Adly MacKenzie. "There's a thunderstorm every day at 4 p.m. There's like miles and miles and miles of sky. I posted an Instagram the other day and it was like, you think you've seen the sky and then you move to Santa Fe. It's just unbelievable. And there's something about the nature of that feeling of that sort of just makes you feel less alone."

So, while the explanation for the UFO crash on Roswell, New Mexico is totally fictional, theories persist today that there was a real UFO crash in the area. Plus, with New Mexico being a border state, the "aliens" discussed in the series lend themselves to plenty of political metaphors. It may be science fiction, but it's grounded in a real and beloved urban legend.