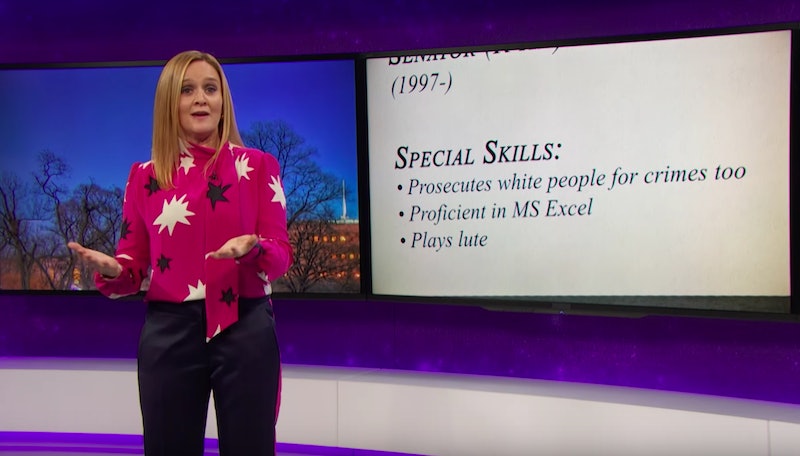 After two seasons hosting her late night show, Samantha Bee says she doesn't care if Full Frontal gets canceled anymore — because it's already done what it needed to do. Lena Dunham interviewed Bee for The Hollywood Reporter to discuss how she savagely rips into political agendas that commentators tend to shy away from or dance around and how her no-holds-barred attitude can make you laugh during even the most serious of circumstances. During the interview, Bee's outlook on potential cancelation was both inspirational and exactly what we've come to expect from the late night host.

Dunham asked Bee where she got the Samantha Bee persona and about the imprint she'd leave if the show got canceled after only six episodes. Naturally, the host was ready with an answer that makes it clear that cancelation isn't exactly on her list of fears:

We thought, "Even if we only have six episodes, let's make them the most kick-ass six episodes of television that we could possibly make. Let's make the show that we would want to see, and only cater to our own interests and kick the door in with it."... We were nervous at first, but we were like, "Oh, f*ck it, we're too old to worry. If it gets canceled, we'll say 'c*nt' on television, and we'll go be farmers."

She went on to explain to Dunham how she left The Daily Show primed and ready to start a working on owning her point of view. "It's more forceful in ways that Jon would never be..." she said of Full Frontal. "Our point of view is just — it is different. We've been steeped in womanness for a long time, and we have other sh*t going on, and we see the world differently."

And it's true. Women have unique opinions, and there's a real need for a woman to weigh in on topics that affect women because too often we hear about women's issues from the perspective of men. For Bee to not only deliver witty commentary on those topics, but in an unapologetic, in-your-face kind of way, definitely contributes to Full Frontal's success.

The host doesn't really care if something hurts your feelings, and, when she does hurt your feelings, she'll make you laugh along the way. Bee wants the big issues to be addressed and does the leg work behind the scenes too. This includes going to Jordan for a segment about Syrian Refugees and confronting state legislative decisions like California diaper bills and untested rape kits in Georgia. Full Frontal wants you to be informed on the issues that get swept under the rug and make you think critically about those issues — whether you want to or not.

It's safe to say Bee's confidence about her show has doing its job is well-founded. The host may have turned her back on trying to be the best, but the way she has tailored her platform to be in a league of its own will definitely ensure she goes down in history as one of the greats.