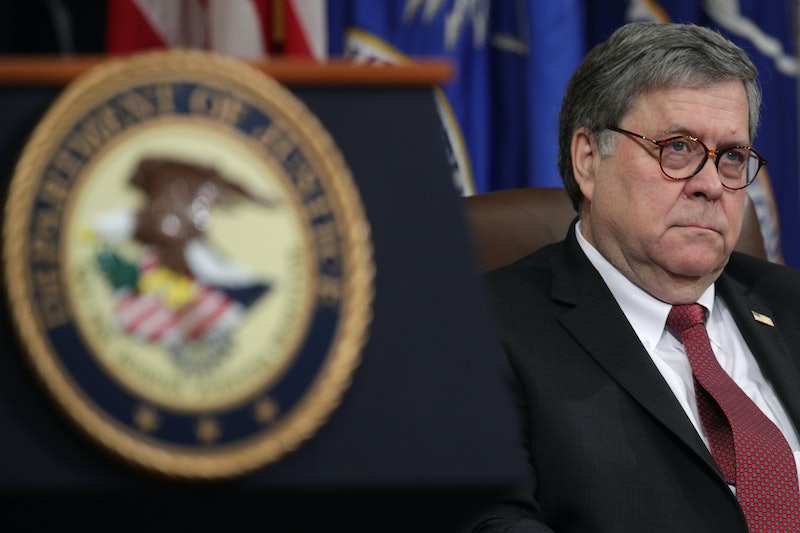 Democrats are determined to get their hands on special counsel Robert Mueller's report — especially after some who worked on it told The New York Times that the attorney general's summary excluded some of the more damaging information about the president. The report is likely to make it to Congress — but the question is how much of Mueller's report and evidence will be redacted.

Attorney General William Barr is reportedly working on redacting some of the 400 pages so not even Congress can read it. The Washington Post reported that the decision of what to redact ultimately belongs to Barr. But he's reportedly working with Deputy Attorney General Rod Rosenstein and Mueller himself — as well as their aides — to decide what can be released and what not.

There are four areas that will be redacted, according to a letter that Barr sent to Congress at the end of March. Those are grand jury materials, information that reveals intelligence-gathering secrets, information about ongoing investigations, and details that would identify "peripheral" individuals mentioned in the investigation.

Barr and his team will decide what falls into that category. Then, if Congress isn't satisfied, there will likely be a long battle — perhaps reaching the courts — with the Department of Justice (DOJ) to release more.

David Laufman, who worked at the Justice Department under Obama, when the Russia investigation first started, told Politico that he thought the process might get messy.

And then there's another possibility: that Trump will use presidential privilege to block portions that Barr does not have a problem with releasing. Barr said in his letter, though, that this is very unlikely. "Although, the President would have the right to assert privilege over certain parts of the report, he has stated publicly that he intends to defer to me and, accordingly, there are no plans to submit the report to the White House for a privilege review."

John Bies, who worked for the Justice Department during the Obama administration and now works at American Oversight, told The Washington Post that he is "hopeful the attorney general will do the right thing here and make everything public that can lawfully be made public." "There’s a lot of pressure all pointing in the direction of doing a robust release," he said.

Bies went on to say that normally prosecutors would withhold plenty of grand jury information just to be safe, but in this case, he added, there is "a strong counterbalancing interest in ensuring that everything that can come out does come out." The Washington Post noted that the amount of information that passed through a grand jury is potentially from 2,800 subpoenas and 500 search warrants.

If there's a way to get the entire report, Democrats will go for it. House Judiciary Committee member Rep. Pramila Jayapal told ABC's This Week that they will do their best to get the whole thing. "I think the main thing here is what is the president hiding?" Jayapal said. "How do we make sure that we get everything that was produced? We have not seen a Mueller report. We have only seen a Barr report, so we're going to stay firm on this. We're going to push hard."

Meanwhile, Barr's redacted version should be delivered to Congress by mid-April.