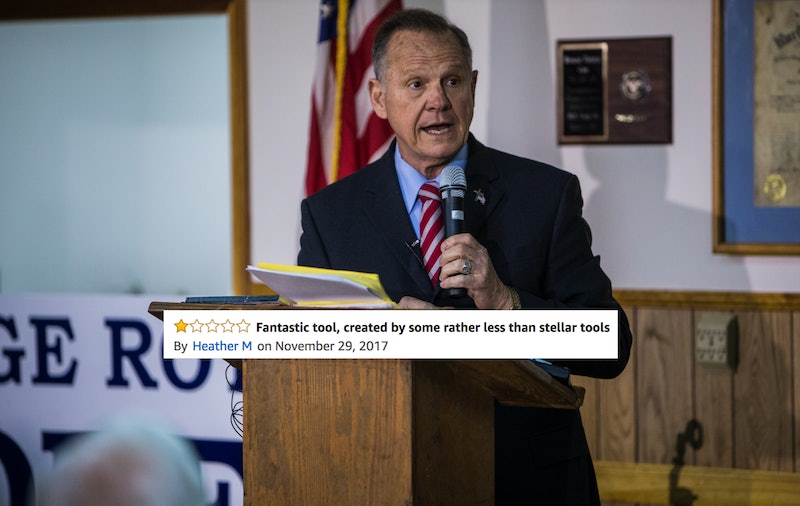 In 2011, Republican Senate candidate Roy Moore participated in teaching a study course that tells students to begin with a "biblical foundation." The course, titled "Law and Government: An Introductory Study Course," offered seven units proving an "understanding of today's legal, moral, and ethical issues of law and government," but it's the Amazon reviews of the biblical course Roy Moore helped create that you might be more interested in reading.

Moore is both a featured speaker and co-author of the curriculum, which was published in 2011 and is still available on Amazon. It includes written materials as well as visual and audio lectures, one of which is given by Moore himself. The course also includes materials from other lecturers, including a man named William O. Einwechter, who called feminism "heresy" and said that women are not "qualified" to be civic servants. He claimed that female officials ruling over men "is not God’s revealed will."

Many have conflated Einwechter with Moore, believing the Alabama senate candidate, who has been accused of sexual misconduct and inappropriate relationships with underage girls, was the one to say such things. His campaign vehemently denies both the allegations of sexual misconduct, as well as the idea that he stated women shouldn't be allowed to run for office.

"Judge Moore has never stated or believed that women are unqualified for public office," a spokeswoman told the Washingtonian. "Judge Moore believes that men and women are created equal and he would absolutely confirm qualified, constitutionally conservative judges—men or women."

However, after Think Progress published its investigation, the course materials began receiving new reviews on Amazon. It had just a single review before Wednesday but has much more now. Here are some of the funniest.

Shame on you if you're a woman and are using your eyes to read this article.

The curriculum does not seem to include a money-back guarantee.

A Book Made for Trump

The textbook could prove to be some stiff competition for All Quiet on the Western Front as Trump's book of choice.

But this would be funnier without digs at the poorly educated.

The Best Times to Read It

Alabama's Democratic candidate for Senate, Doug Jones, put up a billboard advertisement against Moore reading, "Thou shalt not covet thy neighbor's daughter."

Moore's involvement with the company that offered the course extended beyond this curriculum. According to Think Progress, he was also a lecturer at the organization's "Witherspoon School of Law and Public Policy," which offered courses — available only to men — on interpreting public policy and law through a Biblical framework. Moore once said about the program: "All who attend the Witherspoon School of Law and Public Policy have an opportunity to share in the restoration of our Nation — One Nation Under God."

More like this
Michigan’s Governor Is “Going To Fight Like Hell” To Protect Abortion Access
By Andrea Zelinski
How The City Healed Five Years On From The Manchester Arena Attack
By Ella Glover
Sandra Bullock, Girlboss Extraordinaire
By Matt Harkins & Viviana Olen
Kim Kardashian Remembers Her Last Words To Death Row Victim Brandon Bernard
By Jake Viswanath
Get Even More From Bustle — Sign Up For The Newsletter