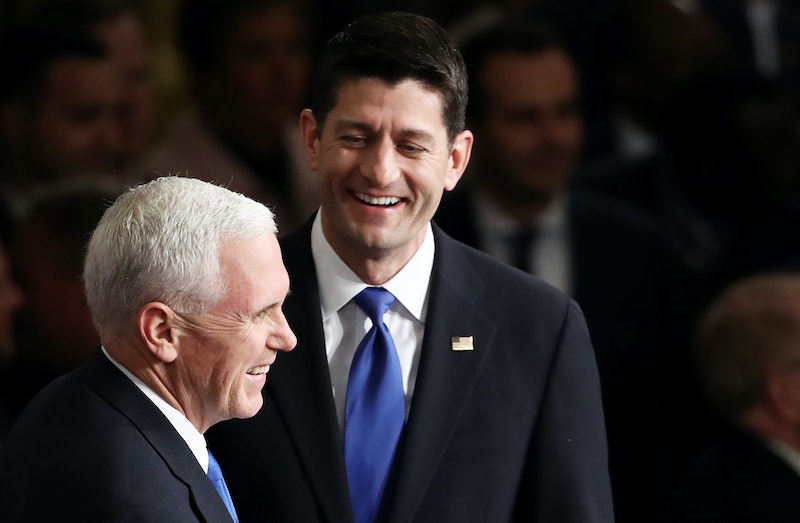 They didn't meet the 100-day mark for President Donald Trump, but the House GOP finally made progress in its attempt to repeal and replace the Affordable Care Act, known by most as Obamacare. The new bill, "Trumpcare 2.0," is technically still named the American Health Care Act despite new revisions that appealed to the hyper-conservative Freedom Caucus. In a Thursday vote, the House passed the GOP's health care bill in the first substantial success in the effort to repeal and replace Obamacare.

As recently as Tuesday, it seemed that the bill was doomed to fail as representatives bailed on the piece of legislation following a revision that would repeal the guarantee that those with pre-existing conditions can get coverage. Two Republican House members, Fred Upton of Michigan and Billy Long of Missouri, had come out against the bill, citing the MacArthur amendment, which allows states to forego Obamacare-era protections for people with pre-existing conditions.

But in a meeting Wednesday, President Trump was able to convince them to flip its votes after he promised $8 billion to fund high-risk pools over the next five years. Democrats and other progressive groups, however, held even the extra $8 billion will not be enough to maintain coverage for those with pre-existing conditions. Mike Pence also spent the day on Capitol Hill lobbying any holdout votes.

Of course, this is the second attempt at passing the bill this year. A repeal and replace seemed to have died off in March with Republicans ready to move on from the bill after House Speaker Paul Ryan failed to garner the votes to pass. But then Trump made it his priority again.

He has long been pushing for the legislative victory, but he seemed to grow particularly committed after the first bill was pulled. According to a report in Politico, Trump quietly lobbied for the health care repeal's revival. "I’m going back to it. I’m not going to give it up," Trump reportedly said at the end of March.

Obviously, this second push was a lot more successful. What remained unclear as the bill headed to the floor was exactly how it would affect Americans who currently rely on the Obamacare exchanges and the Medicaid expansion for their health care as the House moved for a vote before the Congressional Budget Office (CBO) could study the updated plan.

The original version of the bill was also introduced without a CBO rating too, but the office's report did come out before it could have come to a vote back in March. This time, that's not the case. The original bill was estimated to cost 24 million people their health insurance and raise premiums for everyone else by 15 to 20 percent. This one could be better or worse — there's no estimate.

Exactly what the consequences of this push towards repeal will be for the GOP is unknown. But spinning the attempt to take away health care from millions of Americans can't go over well — especially with Trump's supporters that come from working class backgrounds.

Nancy Pelosi, the Democrat leader of the House, made sure to note that the Republicans must fully own their policy push:

Forcing a vote without a CBO score shows that Republicans are terrified of the public learning the full consequences of their plan to push Americans with pre-existing conditions into the cold. But tomorrow, House Republicans are going to tattoo this moral monstrosity to their foreheads, and the American people will hold them accountable.

The best thing for most Americans would have been for the GOP to come to their senses and not push a plan at all that would cost people health insurance. Instead, they may become responsible for millions losing coverage — and hopefully, voters remember that in 2018.