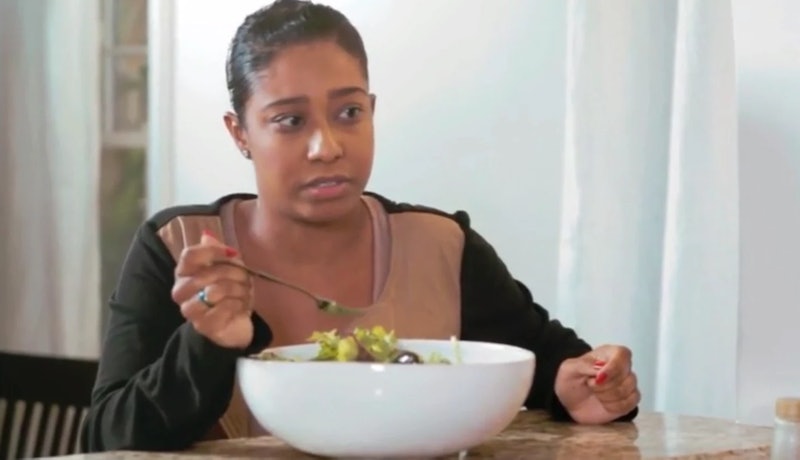 The video’s description reads: “Jaxton wants to make it up to his wife with a nice in-home massage but things don't go as planned when masseur Luke offers up some extra lip service and ass. Little does he know he's about to get caught and right in front of that salad again!”

Without further ado, some key moments from Not In Front Of My Salad... Again!

Yes, that is salad cascading behind the title card. True cinematic excellence. We open on the nameless wife making a salad.

The salad (uncredited) is the true star of the show.

She is very into the salad.

A few questions: Does Jaxton wait until his wife is eating a salad to cheat on her? How can the nameless, salad-eating wife continue to eat salad after having such a jarring experience in the past? What kind of salad greens is she using?

Then, Salad Wife walks to another room to go eat her salad in peace.

Wait, what was that?

Oh, just her husband in a different room having sex with another man right in front of her salad AGAIN.

The salad, also in shock, falls out of her mouth dramatically onto the floor.

Like, a lot of salad falls out of her mouth.

She and her salad can't believe their eyes.

Finally, Salad Wife runs out of the room never to be seen... Again!

Will there be third installment in the salad series? What will it be called? “Once More, In Front Of My Salad!”? “Right In Front Of My Salad For A Third Time!”? “How Much More Can Me And My Salad Bear?” Please direct your thoughts and prayers toward Salad Wife and her salad during what I'm assuming can only be a difficult time for both of them.