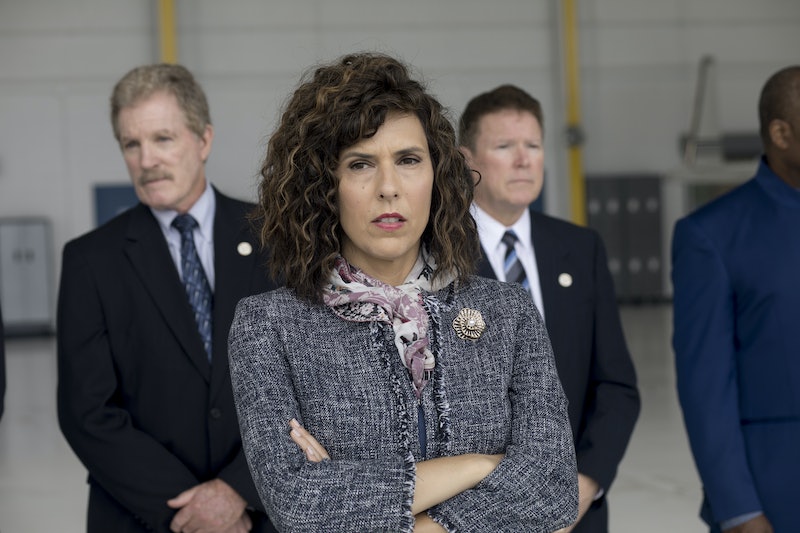 HBO's new hit comedy The Righteous Gemstones follows the the ultra-rich megachurch founders the Gemstone family, skewering the culture of corruption that surrounds them and landing plenty of laughs along the way. The family is full of dysfunctional characters, from stern patriarch Eli Gemstone (John Goodman); to his bickering children Jesse Gemstone (Danny McBride), Judy Gemstone (Edi Patterson), and Kelvin Gemstone (Adam DeVine); to Eli's audacious white-haired showman of a brother-in-law Baby Billy Freeman (Walton Goggins). In the Gemstone ministry, it's basically tradition to dabble in some misbehavin'. But if you ask Edi Patterson which character indulges in this pastime the most, she'll tell you it's her character Judy who's the loosest cannon of them all.

Though the pastor's daughter may be the true wildcard of the Gemstone children, Patterson has a lot of sympathy for her, too, which keeps her portrayal from becoming a caricature. As a glorified secretary at the church, no one gives Judy the chance to let her little light shine, and it's easy to relate.

"I think from the jump I just felt so much for her, because she's so frustrated and so wants to be important like her brothers and wants to be seen," Patterson, who also served as a writer on Season 1, tells Bustle. "And I think probably her mom saw the good in her, and now her mom's gone. And so it's that sort of banging your head against the wall thing of like, 'Somebody look at me!'"

Judy may be a character worth pitying in some ways, but Patterson cautions that it's not that simple, either, as she does plenty of terrible things, too. In some ways, she's even more unhinged than her brothers.

"She thinks she's entitled to certain things, and it's just a weird brain flaw that they all have from growing up rich and thinking like, 'Oh I'm allowed to do this. God is sanctioning this,'" Patterson says, citing her character's decision to steal money from the church and stash it in the nursery air vent as an example.

While it's true that Kelvin and Jesse are just as entitled and act out, too, Patterson argues that they know how to behave in public, while Judy seems to be another matter. The actor theorizes that her character's behavioral problems were a byproduct of "extreme wealth mixed with a parent’s desire to make their kids happy" — something that all of the Gemstones have in common. But Judy in particular has a deep-set range, which often flares up when she's with BJ or when anyone second guesses her abilities. Judy, she says, "has a rawness that probably is a question mark for her father."

That rawness manifests most vividly in the ways she weaponizes feminine vulgarity when interacting with her siblings. "I like watching Jesse get in trouble," a young Judy says in Episode 5. "It makes my bird twitch." (McBride wrote this line, Patterson says, but she wishes she'd thought of it because "it's for the ages.") Patterson theorizes that this oversharing is meant to both provoke the men in her family while also proving that she can be just as crude as them. After all, it's quite radical in some ways that Judy is just as foul-mouthed as her brothers — as the actor points out, her character "had to get real tough, real fast" to keep up with them.

We get one of the most potent glimpses into Judy's childhood and her mother's role in the church during Episode 5, which flashes backs to when Aimee-Leigh (Jennifer Nettles) was still alive. She was clearly the heart and soul of the Gemstone ministry, as evidenced by her rousing rendition of the song "Misbehavin'" with her brother, Baby Billy.

The bizarrely catchy ditty, which has since become an internet sensation, was a joint effort between Patterson, McBride, and songwriter Joseph Stephens. "It came together really fast and was kind of awesome and magic," Patterson says of the writing process. But when Judy is given the chance to perform the iconic number, her attempts are once again a bit off. Perhaps it's her exclamation of "Let's f*cking kill people!" while practicing with Baby Billy, or maybe it's her decision to sing the phrase "Children of the Corn" as her vocal warmup, but it's obvious that she's not quite ready for the limelight.

In her frustration, Judy is prone to blame her family for keeping women down — and they while they often do, it's not always the correct defense of her situation. "I think that is helpful for her to have that in her brain to chew on that they're trying to keep women down," Patterson says. "And I think there's times where it's to her emotional benefit to believe that." But ultimately, Judy's failure to get ahead isn't indicative of her gender, at least not completely. "Obviously her dad doesn't have very much of a problem with a woman being in charge, because [her mother] Aimee-Leigh was front and center at this joint," she notes.

Perhaps with a bit more confidence — and a better vocal warmup song — Judy can turn things around.

More like this
At 28, Tisha Campbell Was Newly Married & Dancing Through A Career Pivot
By Grace Wehniainen
At 14, Melissa Barrera Was Planning Her Quinceañera & Falling In Love With Musical Theater
By Gabrielle Bondi
At 14, D'Arcy Carden Was Sneaking Out To Parties & Crying Over Kurt Cobain
By Ivana Rihter
In Rap Sh!t, Social Media Has Main Character Energy
By Aramide Tinubu
Get Even More From Bustle — Sign Up For The Newsletter