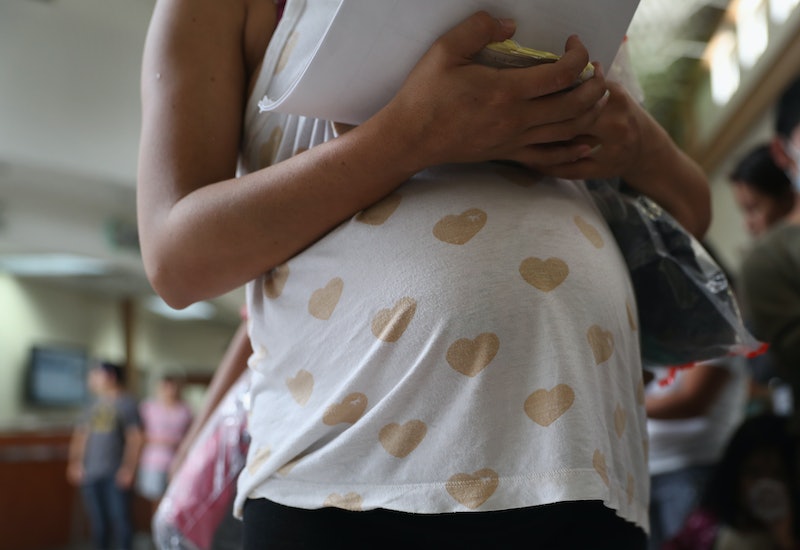 The rights of pregnant people are under attack both in the statehouses and from the federal government. With Brett Kavanaugh's nomination to the U.S. Supreme Court, combined with increasingly strict TRAP statutes across the country, we could be facing a full Roe repeal or at least a severe crippling of abortion protections. But there is also a more insidious trend: the criminalization of pregnancy.

The trend of criminalizing pregnancy takes two forms. Either prosecutors and judges contort existing laws in ways they were never intended, or legislators propose and pass new laws that target pregnant people. Prosecutions of miscarriage, stillbirth, abortion, and drug use during pregnancy — even when the drugs are prescribed and when the drugs do not harm the fetus — have become widespread.

As these cases continue to trickle in across the country, it becomes overwhelmingly clear that a person’s human rights are devalued and violated upon becoming pregnant. In Virginia, Katherine Dellis was sentenced to five months in jail in February 2017. Her crime? Suffering a stillbirth and disposing of the remains before seeking emergency medical help.

After her stillbirth, Dellis was convicted of concealing a dead body. Virginia Attorney General Mark Herring issued an opinion clarifying that the law is not intended to apply to someone who has a miscarriage or a stillbirth and doesn’t head straight to a funeral home. “Virginia law does not criminalize women who have a miscarriage,” he said in a statement. But the opinion came too late for Dellis; a panel of the Virginia Appeals Court had already ruled against her.

Appeals Court Judge Theresa M. Chafin had concluded that "the legislature intended that a fetus be treated the same as a dead body." Her ruling was so broad that, if it were to set a legal precedent, it would mean anyone who had a miscarriage at any stage in her pregnancy might find herself under threat of a felony conviction unless the miscarriage was immediately reported to the police.

On June 1, Virginia Gov. Ralph Northam pardoned Dellis, but Virginia isn’t alone in depriving pregnant people of their rights. The volume of examples from around the country is staggering. In 2013, Lynn M. Paltrow and Jeanne Flavin from National Advocates for Pregnant Women released a study in which they cited 413 examples from 1973 to 2005 where a person’s pregnancy contributed to the deprivation of their physical liberty. And in recent years, there have been many new instances across the country.

In 2017, Amnesty International published a report documenting the “patchwork” of laws across the U.S. that are used to prosecute people when they become pregnant, concluding that “the existence and enforcement of pregnancy criminalization laws are violating of pregnant women’s human rights.” A recent case that raised public outrage was the prosecution of Purvi Patel, an Indiana woman imprisoned for three years after allegedly ending her pregnancy before she was finally freed by an appellate court. Although she was the first woman in the U.S. charged with homicide offenses for ending her own pregnancy, she is far from the only woman prosecuted for pregnancy outcomes, both intentional and unintentional. Women of color and low-income women are disproportionately affected, though no pregnant person is safe.

Many other women across America have stories similar to Patel’s. For example, an Arkansas woman was convicted of concealing a birth after delivering a stillborn fetus in the middle of the night at home. She safeguarded the remains for several hours and then brought them to the hospital the next morning. The Arkansas Court of Appeals overturned her conviction, but the DA in her county has chosen to re-prosecute her. Her trial is scheduled for this fall.

In rural Pennsylvania, Jennifer Whalen was sentenced to nine to 18 months in jail for helping her 16-year-old daughter safely self-manage an abortion with pills. Met with barriers of distance, cost, and unnecessary regulations intended to make abortions in clinics hard to access, Whalen researched misoprostol and mifepristone, the drugs that doctors prescribe, and purchased them online. She hadn’t known that buying the pills was illegal.

The future of reproductive rights across the country is under immediate threat — and this threat goes beyond Roe.

Also consider the story of Bei Bei Shuai, a Chinese immigrant in Indiana who attempted suicide during her pregnancy. She survived her suicide attempt, only to be devastated by her daughter’s death just days after her emergency cesarean delivery. Shuai faced murder and attempted feticide charges, which were eventually pleaded down to criminal recklessness.

Every story is different, but the common thread that unites these prosecutions is the refusal to see pregnant people as not only the masters of their own bodies, but also as full citizens worthy of constitutional protection. Ironically, the push to punish only serves to strip pregnant people of their own rights and human dignity by reducing them to potential suspects and threats to their own pregnancies.

A recent resolution by the American Medical Association House of Delegates points to the public health policy implications of these prosecutions. The physicians raised concerns that criminalization would increase health risks and stop patients from seeking care. The resolution also pointed out the race disparities in prosecutions for pregnancy outcomes, which is of particular concern because women of color are more likely to experience miscarriages and other complications of pregnancy.

As executive director of the National Advocates for Pregnant Women, Lynn Paltrow, cautioned in a New York Times interview in 2012, “there is no way to treat fertilized eggs, embryos and fetuses as separate constitutional persons without subtracting pregnant women from the community of constitutional persons.”

With Kavanaugh’s confirmation vote looming, the future of reproductive rights across the country is under immediate threat — and this threat goes beyond Roe. Federal protections are at risk, and we urge legislators and prosecutors across America and at all levels of government to treat pregnant people as human beings first, deserving of the respect of their full dignity and autonomy.

Galina Varchena is the policy and communications director for NARAL Pro-Choice Virginia. Amber Khan is a senior staff attorney for the National Advocates for Pregnant Women. Farah Diaz-Tello is senior counsel for the SIA Legal Team at the UC Berkeley Center on Reproductive Rights and Justice.

This op-ed solely reflects the views of the authors, and is part of a larger, feminist discourse.