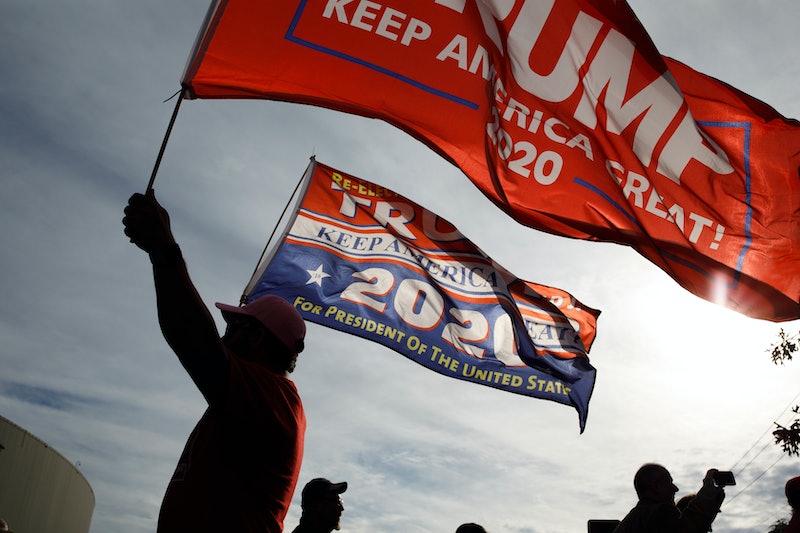 Amid chatter of a potential Republican primary challenger, the Republican National Committee (RNC) has sent a message to party members: get behind Donald Trump in 2020. On Friday, the RNC unanimously voted to give Trump "undivided support" ahead of the 2020 presidential election. Although largely symbolic, the vote comes as the longest government shutdown in U.S. history sinks the president's approval rating.

With the resolution, the RNC voiced the Republican Party's "undivided support for President Donald J. Trump and his effective Presidency," The Hill reported the resolution read. According to The Washington Post, the resolution also praised Trump as a "pragmatic, energized President who shares and understands the will of the American people."

It reportedly went on to applaud Trump's courage, his commitment to campaign promises, and what the resolution called his "bold and innovative" communication talents. "President Donald Trump has made gains which have benefited Americans no matter their ethnicity, race or persuasion, with a new message of hope, opportunity, prosperity, and national security that has already improved the lives of millions of people," The Washington Post quoted the resolution as having said.

Trump welcomed news of the resolution's passage in a tweet Saturday that appeared to suggest a 2020 victory should be easy for his administration. "Thank you to the Republican National Committee, (the RNC), who voted UNANIMOUSLY yesterday to support me in the upcoming 2020 Election," he said. "Considering that we have done more than any Administration in the first two years, this should be easy. More great things now in the works!"

But it's worth noting that, as The Washington Post pointed out, the resolution passed by the RNC isn't an official endorsement of a Trump 2020 campaign. According to the paper, such an endorsement was discussed by some RNC members. Ultimately, however, concerns over whether such an endorsement would force the RNC to abide by Federal Election Commission rules well before the 2020 election kicked off kept the political committee from offering more than Republicans' "undivided support."

The RNC's resolution comes a month after it was reported that the committee planned to merge its field organizing and fundraising programs with those of Trump's 2020 re-election campaign. According to Politico, the merged entity will be known as Trump Victory.

Although no Republican has yet to officially announce a 2020 Republican primary challenge, there's some speculation that Maryland Gov. Larry Hogan is acting a lot like someone preparing to challenge Trump for the GOP nomination. According to The New York Times, Hogan plans to visit Iowa later this year and will potentially meet with other Republicans who may have soured on Trump there.

But Hogan apparently isn't the only member of the Republican Party reported to be mulling over a potential 2020 Republican primary challenge. According to The Times, former Massachusetts Gov. William F. Weld has also discussed either challenging Trump for the Republican nominee or attempting to garner the Libertarian presidential nomination in order to challenge him on Election Day.

Still, as of now, Trump remains unchallenged for the Republican Party's 2020 nomination although it remains unclear if the RNC's recently passed resolution will persuade any potential Republican challengers away from stepping out of the wings and launching campaigns.