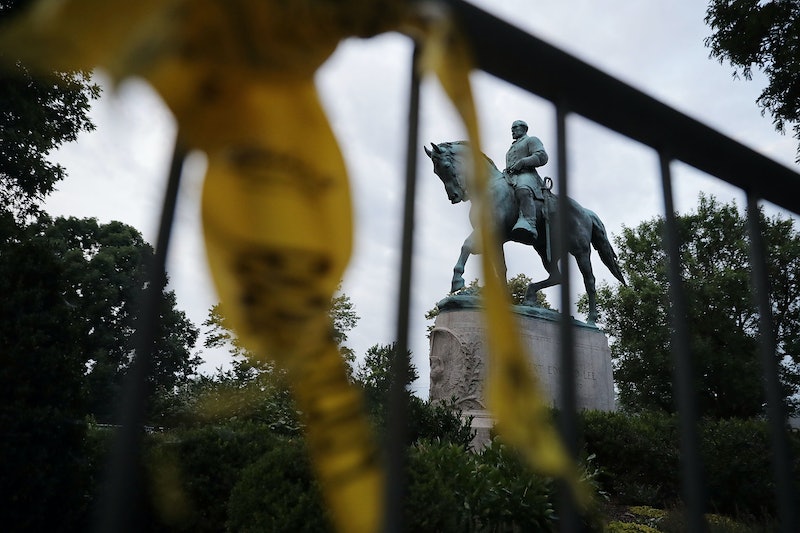 A white supremacist rally Charlottesville, Virginia, erupted in violence over the weekend, leaving one woman dead and several others injured. Some defenders of the event deny that it had anything to do with race, insisting it was simply a protest against the removal of a confederate statue from Emancipation Park. But no, the Charlottesville rally was never about a statue. It was about white people expressing hostility toward non-whites.

Let's first take note of how the event's supporters advertised it. The rally was organized by Jason Kessler, who referred to it as "a right-wing free speech event" when announcing it on his personal website. Once it was underway, Kessler declared it an "incredible moment for white people who've had it up to here & aren't going to take it anymore." He said nothing about the statue.

"This was about white grievance, white anger and white supremacy, and nothing more."

The event was also promoted by the Daily Stormer, a prominent Nazi website. In a post on August 5th, the Daily Stormer referred to the rally as "an explicitly pro-White event," adding that "as far as the White Wing is concerned (Alt-Right, Southern Nationalists, White Nationalists), there has never been an event in which there has been more cooperation." It made many other references to white nationalists, and compared the then-upcoming Charlottesville rally to an anti-Israel march from 2002. Once again, there were no references to confederate statues.

So, that's the first clue that something is amiss: The event wasn't even promoted as a protest against the removal of a statue. It was promoted as "an explicitly pro-White event" and lauded by its organizer as an "incredible moment for white people." A lot of references to whiteness; not much about statues.

Okay, but what about the event itself? There's no doubt that many of the supporters did oppose the removal of the Lee statue; images and eyewitness accounts from the event, however, don't reflect this focus.

What they do show is attendees donning Nazi armbands, swastika flags and t-shirts with Hitler quotes on them. Many attendees, including a handful of literal klansmen, were photographed giving the Heil Hitler salute. According to one journalist who attended, the protesters "shouted 'Jew' every time the name of Charlotteville’s Jewish mayor, Michael Signer, was mentioned." Video from the event depicts supporters chanting "Jews won't replace us" and "go the f*ck back to Africa." Those aren't arguments in favor of keeping a statue in a park; they are racist things that white supremacists say to people of color and Jews.

Of course, the most tragic event at Saturday's rally was the death of Heather Heyer, a counter-protester. Heyer was killed when a white supremacist drove his car into a crowd of leftist counter-protesters. His former high school history teacher told the Cincinnati Inquirer that he once wrote an essay that "was very much along the party lines of the neo-Nazi movement."

In totality, the rally on Saturday looked less like a protest against a city planning decision than a protest against non-white people existing in America. Sure, the attendees may have incidentally opposed the removal of the Lee statue. But that was never the focus of the event — not in its conception, its promotion or its execution. This was about white grievance, white anger and white supremacy, and nothing more. The statue was just a smokescreen.