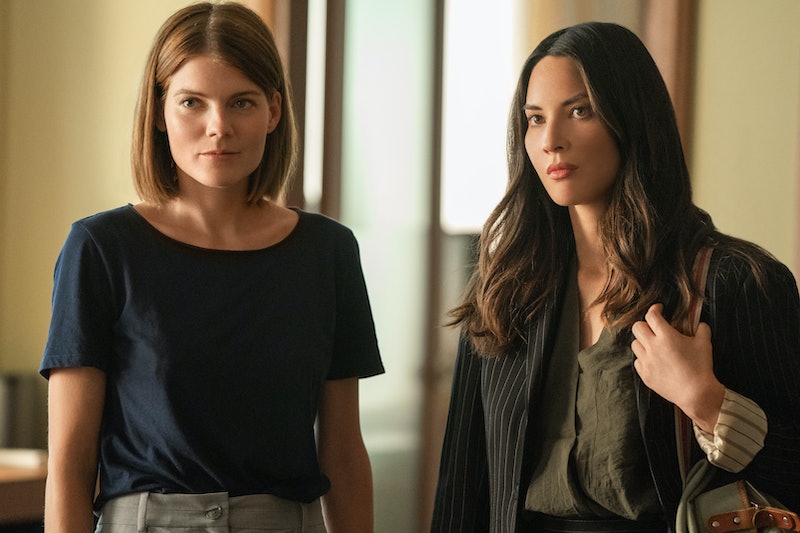 Starz' new supernatural mystery series The Rook is based on a novel by Daniel O'Malley, but skipping to the last page won't necessarily spoil everything about the show. The television adaptation has made some key stylistic changes and some plot tweaks. Which means that fans of the book will be as in the dark as the show's amnesiac protagonist.

The Rook was published in 2012 and a sequel that centers on other characters in this universe, titled Stiletto, came out in 2016. The basics of the story are the same: Myfanwy Thomas wakes up surrounded by dead bodies and has no idea who she is — only to then discover that she's a supernatural secret agent with a group called the Checquy and someone is trying to kill her. She's navigating her new/old life while also solving the mystery of who she is and what happened to her. You can actually read a preview of The Rook's first two chapters online for free at the official website.

What seems to be most different about the Starz series is the tone. The Rook obviously wants to grab the attention of people who are fans of hazy London-based shows like Killing Eve and Bodyguard, as well as sleek and stylized supernatural mysteries like Orphan Black. But look at this trailer for the first book — it's much goofier. The Rook book has a character with smoke trailing off their backs, as well as a literal vampire.

Per the trailer below, you won't see any administrative assistants with horns on the Starz series.

According to The Verge's review of the series, the book has much more of a Men in Black and/or Angel vibe, with a lot more of the Checquy's day to day operations dealing with magical elements running rampant through London.

There was another beloved novelist — one quite familiar with vampires, actually — attached to the series at one point, too. Twilight and The Host author Stephenie Meyer was on board to serve as showrunner for the series, and adapted The Rook for the small screen herself. Due to creative differences, the producers wanted a different adaptive take and Meyer exited the series while the first two episodes were being filmed in London. Lisa Zwerling & Karyn Usher stepped in as co-showrunners, and executive producer Stephen Garrett, who also produced spy dramas Spooks and The Night Manager, remains.

In the same IndieWire piece, The Rook actor Olivia Munn talked about how grounded the supernatural elements are. According to the actor, the show makes you think that if you work hard enough, you can develop the same abilities as the characters. That concept, that these powers are no different than doing crystal healing (an example Munn cites), may underline the biggest difference between the book and the series.

While this take on The Rook isn't necessarily "dark and gritty," as some adaptations often are, it is a different interpretation on the world O'Malley created. That's not always a bad thing, but fans of the books: Keep it in mind.