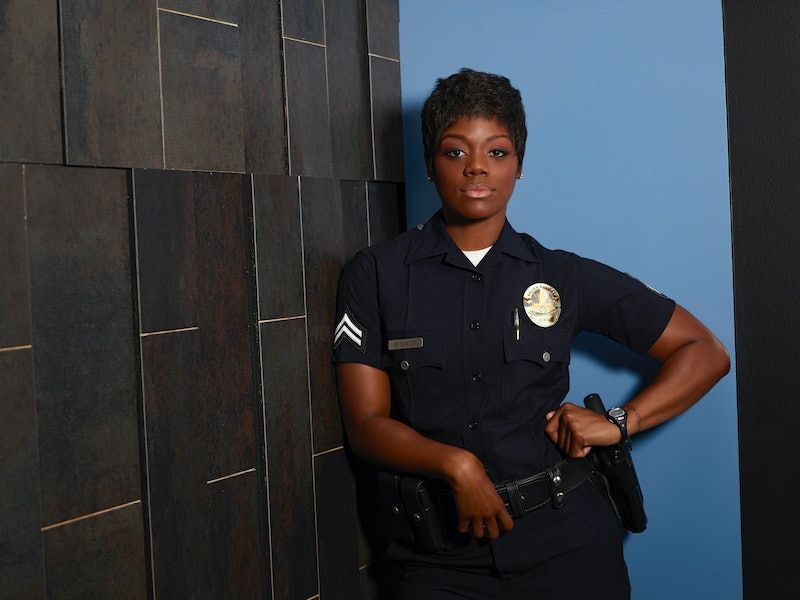 A day after series regular Afton Williamson announced she was leaving The Rookie after one season due to alleged sexual harassment and racial bullying, the actor once again opened up about her decision online. In the follow-up Instagram post on Monday, Aug. 5, Rookie's Williamson detailed the sexual harassment and racial bullying she allegedly experienced on set. According to The Hollywood Reporter, the ABC show's production company, Entertainment One, has opened an investigation into Williamson's claims. They released a statement, per THR, saying they "take claims of this nature very seriously. We have initiated an independent investigation which is ongoing and as such, it would not be appropriate to comment at this time." (Bustle reached out to ABC, as well as Entertainment One, for comment on these allegations, but did not receive an immediate response.)

In her original post over the weekend, Williamson claimed that despite reporting the alleged harassment to The Rookie showrunner and executive producer Alexi Hawley (who was identified as "Showrunner/EP"), no action was taken and her complaints were not reported to HR. Williamson claimed that Hawley's alleged inaction is what led to her decision to leave the show. She also accused the executive producers of bullying. (Bustle also reached out to reps for Hawley and Rookie star/executive producer Nathan Fillion for comment, as well as production company eOne.)

Williamson shared the names of her alleged harassers in her second post. "This season on The Rookie, I was sexually harassed by fellow actor Demetrius Grosse," Williamson claimed of the actor who played Detective Kevin Wolfe in five episodes of the series. Williamson also alleged, "I was Racially Bullied and Discriminated against and Sexually Assaulted by Hair Department Head Sally Nicole Ciganovich." According to initial reporting it seems that Williamson didn't name Grosse or Ciganovich in her original Aug. 4 post, but she appears to have updated her caption since then. (Bustle reached out to reps for Grosse for comment on the claims, as well as ABC regarding the allegations against Ciganovich.)

It was in her initial post that Williamson — who played Talia Bishop, a mentor to Fillion's rookie cop, on the series — alleged that she experienced "racial discrimination" and was the recipient of inappropriate racial comments from the head of the hair department and the show's executive producers starting with the pilot. Speaking of Ciganovich specifically, Williamson claimed that this alleged abuse continued throughout the first season, but escalated to sexual assault during The Rookie's wrap party. She also claimed that Ciganovich "was fired ONLY after the sexual assault and NOT for an entire year of outward racism/racially charged language and bullying behavior in and out of the Hair and Makeup trailer."

Beyond further detailing her allegations in her most recent Instagram, Williamson thanked those who have supported her claims. "It just takes a VOICE. I never imagined so many of us have experienced these horrible circumstances and that can NO LONGER GO UNHEARD," she wrote. "We have a voice. ALL OF US. It is our DUTY to use it."

While the public may just be hearing about this now, Williamson's allegations first came to ABC's attention at the end of June, according to the network. "In late June, eOne made us aware and informed us that they launched an investigation that is ongoing," an ABC spokesperson said in a statement, per The Hollywood Reporter. "The safety of working environments is a top priority for us, and we take this matter very seriously."

On Monday, Aug. 5, ABC's president Karey Burke addressed Williamson's allegations at the Television Critics Association summer press tour. “I don’t have a lot of answers,” Burke said, according to Variety. “I learned alongside my colleagues at the end of June that there were allegations and that an investigation had been launched by eOne and I’m waiting for the results of that investigation.”

Burke later stated that “it would be irresponsible” for her to guess the next course of action if Williamson’s allegations are found to be true. In the meantime, Williamson seems determined to continue to speak out. As she wrote on Instagram, "I'm no longer afraid to be vocal about it. We Can Stand Together. Let's Change This Sickness. That Change starts with US."