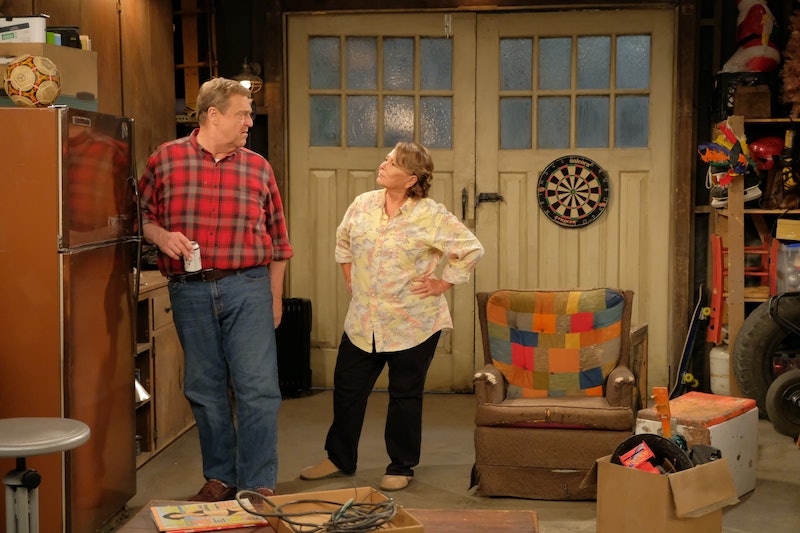 Typically, it's live television events like the Super Bowl or the Olympics that draws trailers for anticipated new shows and movies — but this year, the Roseanne reboot trailer debuted during the Academy Awards. In case you were wondering, it was laden with jokes about the show rewriting that time they killed off Dan.

In what used to be the series finale of Roseanne, a wild twist revealed that the series was based off a book that the character had written, and changed certain elements of her life — including the "fact" that Dan had died after suffering a heart attack during Season 8. He'd been dead the whole time, or something. It's a little confusing, but doesn't matter anymore. Fans knew that the series planned to include John Goodman anyway and this trailer addresses it head on.

"I thought you were dead," Roseanne says in the trailer. "Why does everyone always think I'm dead," Dan replies. So now we have definitive proof that they're addressing the ending rather than completely ignoring it. How fun! The trailer mixes old footage with new, and mostly focuses on what hasn't changed with this family even with a new generation. They're still poor, still joking around, and still together.

"I don't care," said Goodman in an interview with Entertainment Weekly. "I didn’t care. It was irrelevant. It was just silly." He said that it felt like the show had just wrapped, even though it has been two decades. "The hair on my arms stands up," he said. "It's like if I was going to put my Boy Scouts uniform on again and it still fit."

On Twitter, a lot of metaphorical eyebrows were raised at the trailer's use of the phrase "the family that looks like us" and "lives like us." That's partially because both the fictional and IRL Roseanne are Trump supporters, but also because the family is, sure, middle/working class and white.

We'll have to wait for the premiere to see how well the Roseanne reboot represents America in 2018. Besides Barr and Goodman, returning from the original cast are Laurie Metcalf, Sara Gilbert, Sarah Chalke, Alicia Goranson, and Michael Fishman. Yes — both Becky actors are in the revival, and will be playing different roles. Based on how the "Dan is dead" jokes were rolling in that first trailer, this meta joke will surely be addressed as well.

According to an official ABC press release, "new cast joining the one-of-a-kind Conner family includes Emma Kenney as Harris Conner-Healy, Ames McNamara as Mark Conner-Healy and Jayden Rey as Mary Conner." Guest stars include Sandra Bernhard, Estelle Parsons, and Christopher Lloyd. The official description of the series promises both the new and the familiar:

"The original run of the series broke new ground through the authentic and relatable lens of the Conner family, barely scraping by in the fictional town of Lanford, Illinois. It also dominated the ratings as one of the highest-rated television series on the air for its near-decade run. This time around, the Conners continue to face the economic challenges of living paycheck to paycheck, with a sense of the absurdity of it all. With the inimitable Roseanne at its epicenter, the revival will explore life, death and everything in between, with the humor, relevance, warmth and brutal honesty that audiences appreciate."

“I’ve always had it be a true reflection of the society we live in,” Roseanne said, particularly about her character's politics, in an interview with The New York Times. “I think it’s the time to close ranks and see an end to ‘hatriotism’ in this country," she added.