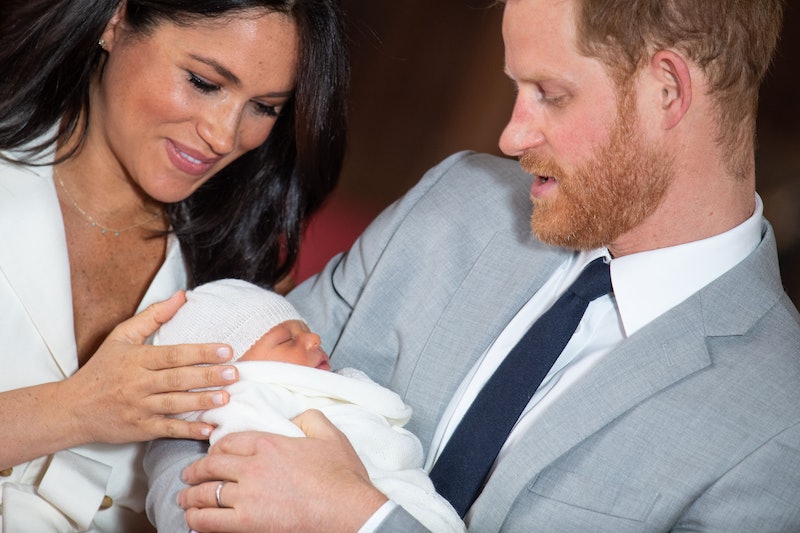 Now that the latest addition to the royal family has finally been revealed to the world, it's time to turn our attention to the royal baby's name. On Wednesday, May 8, Prince Harry and Meghan Markle (also known as the Duke and Duchess of Sussex) announced the name of their newborn son as Archie Harrison Mountbatten-Windsor. According to the Daily Mail's royal correspondent, he will have no official royal title and will simply be known as Master Archie.

Just like most other Harry and Meghan news, the name was announced on the couple's Instagram account alongside a photo of the Queen and Prince Philip meeting their eighth great-grandchild. Meghan's mother, Doria Ragland, is also present in the black-and-white photo.

Since Meghan gave birth on Monday, May 6, name-related rumours had been circling. Would the baby be given a traditional moniker, or would the royal couple go in a completely different direction? Harry and Meghan are commonly regarded as the most progressive members of the royal family, suggesting that they would steer away from more traditional names such as James and Philip.

Archie — which tends to be a nickname for Archibald — is, as expected, a slightly more casual name than previous royal selections. Examining the meaning of the name gives a deeper understanding into why the Duke and Duchess of Sussex chose it. As Harper's Bazaar reports, Archie is a traditional English name and means "genuine and bold." Harrison, the royal baby's middle name, literally means "son of Harry", so that's a fitting choice.

As the Express reports, bookmakers Betfair revealed that the favourite name prior to the announcement was Alexander. The public also believed that a traditional name would still be likely, placing James and Arthur high in the list. Spencer — a tribute to the last name of Harry's late mother, Princess Diana — was also in the running. You'll notice that Archie does not appear in the list.

There are no set rules for choosing a royal baby name. But many royal couples have chosen to pay homage to their familial predecessors, resulting in the same names being used over and over again.

People have already taken to Twitter to give their thoughts on the name Archie. Some are wondering whether Archie is indeed a nickname, but it doesn't seem like that is the case. Others are already cracking jokes.

If you were wondering whether the Queen has to approve a royal baby's name before it is announced to the public, here's the answer: the Queen has the power to bestow a royal title upon any newborn, but does not have the ultimate say over its name, reports the Independent.

"In the case of names, it is more of an informal conversation," royal commentator Kate Williams told CNN in April 2018. "Of course they have such respect for the Queen that if she says, 'I really don't like that name,' they'd definitely take that into account."

It's assumed that the 93-year-old monarch was told the name when she first met Archie earlier on Wednesday. As for what the Queen thinks of Harry and Meghan's choice? You will never ever know, but it's safe to say that the Duke and Duchess of Sussex are going to be one modern royal couple.

More like this
10 Photos Of William, Harry, & Their Cousins Honoring The Queen Together
By Stephanie Topacio Long
William & Kate Shared How Their Kids Are Doing As They Mourn The Queen
By Stephanie Topacio Long
Camilla Paid Tribute To The Queen In A Heartfelt Video Message
By El Hunt and Sam Ramsden
Here’s Everything You Need To Know About Operation London Bridge
By Bustle UK
Get The Very Best Of Bustle/UK