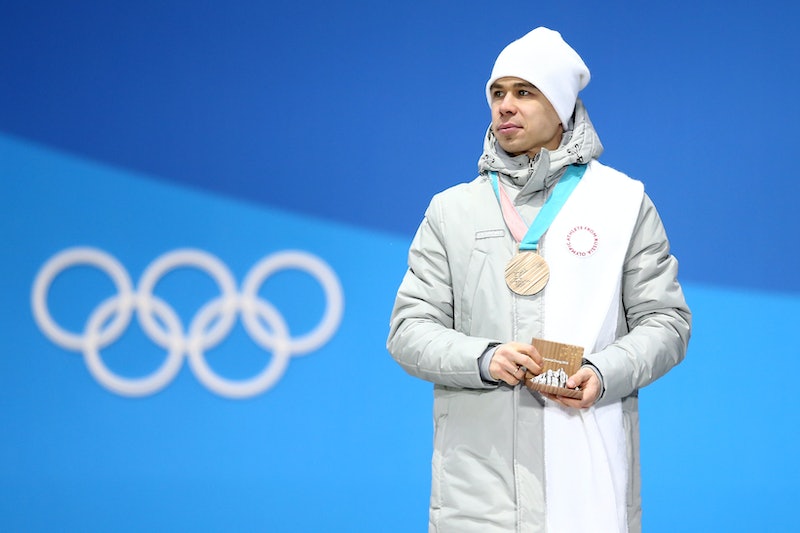 When Russian Olympian Semen Elistratov won bronze in the 1500m short-track speed skating competition this weekend, he decided to dedicate his medal to fellow Russian athletes who are prohibited from competing in the 2018 Winter Games. However, that might have been a huge mistake. The International Olympic Committee (IOC) is now reportedly investigating whether Elistratov broke the rules set for the Olympic Athletes of Russia (OAR), which specifically ban promoting Russian patriotism and symbolism in public.

"I dedicate this medal to all guys that have been excluded from these Games in such a hard and unfair way," Elistratov said at a press conference following his success. "This medal is for you." These comments are what reportedly triggered the investigation into his compliance with the rules.

Officially, Russia is banned from competing in the 2018 PyeongChang Olympic Games because the government was determined to have funded a doping program for its athletes during the 2014 Sochi Winter Games. However, the IOC decided to allow qualifying athletes who weren't implicated in the scandal to compete under the Olympic flag. This allowance came with a lot of stipulations, however, as outlined in a four-page document released by the committee.

Above all else, the document says, "Respecting the rules means, in particular, not taking part in any initiatives that can be perceived as circumventing the spirit of the [Executive Board's] decision." Whether Elistratov violated this decree is yet uncertain, but if the IOC finds that he did, the decision could have major implications on Russia's future participation in any Olympic Games.

How well OAR athletes follow the letter and spirit of the special rules will be "considered when the IOC Executive Board takes the decision to partially or fully lift the suspension of the Russian Olympic Committee," IOC officials wrote in the document. That means that OAR Olympians are under constant scrutiny, and is why officials instantly zeroed in on Elistratov's comments.

The special rules are designed in a way that allows for individual Russian athletes to enjoy participation and success at the Winter Olympic Games, but strips them of their ability to attribute that success to Russia, being Russian, or Russian pride. They may not call themselves the Russian team in public or on social media, for example.

Similarly, they're not allowed to display their country's flag or play their national anthem at any Olympic ceremonies. (Instead, they may march under and display the Olympic flag, and the Olympic anthem will be played if and when they win medals.)

According to the rules, OAR athletes are also banned from celebrating OAR achievements in any unsanctioned way. That means that they can't circumvent the rules by holding "'alternative' victory ceremonies," according to the IOC's guidelines.

One of the staunchest rules says that, since there is technically no Russian Olympic team, selling replicas of "Russian team wear relating to PyeongChang 2018" will be strictly prohibited. The document says that the ban extends to markets online and in Russia.

Most of the rules the IOC laid out are similar in nature, and essentially, they're pretty straightforward. The Russian Olympic Committee was required to accept the conditions, and was reportedly responsible for spreading the rules to participating athletes.

As the Russian doping scandal unfolded, it wasn't clear what would happen to Russian Olympians, as a whole. But on Dec. 5, 2017, the IOC announced that while it was banning the Russian delegation, it would make way for a neutral team of Russian athletes to compete on their own. In order to participate, qualifying athletes were required to have never been banned for doping, and also had to submit themselves to pre-game drug testing.

Critics have said that the ban did not go far enough, and that they would rather all Russian athletes be banned from the games to signify the seriousness of the doping scandal. How, exactly, the IOC will proceed after the 2018 Winter Olympic Games end is unclear, but it is expected to be a hot topic of conversation until well-after the games close.